Download along my own virtual way in Overpass API

Again a bit of prototyping today.

I always wondered what the best way to download all objects along some GPX track (more generally a list of lat/lon pairs) in Overpass API might be.

Usually, you don’t want to create some complex poly-filter for this, or even worse upload your gpx track as OSM way just for the sake of finding out what’s close by.

You might have come across the around filter, which comes in handy to find objects around a center point. I have extended this idea a bit to also handle linestrings.

Here’s a first result: a turquoise circle in the middle is our great made up GPX track, consisting of about 20 points. All the yellow stuff in the background is what Overpass API returned as highways up to 500m away from our circle. Obviously, that circle doesn’t exist in OSM, so we’re really looking at what’s close to our virtual way. 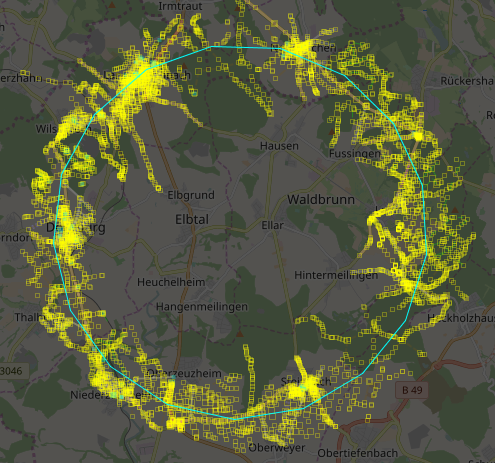 Imagine you want to create a map with only minimum features (motorways, some important nodes), and some place names along your own lat/lon pairs. Here’s an example for such a trip from Frankfurt to Basel, downloaded as 10MB PBF file, processed via osm2pgsql and rendered by Kosmtik:

It would be stupendous if that could be integrated into JOSM.

Well, I guess this needs to be merged into the official Overpass API branch first. So far, this is only in my own personal branch and not part of the official release.

@Polyglot: JOSM does support this for a long time, although the online help spares out a separate page about the download action.

JOSM indeed supports downloading along a gpx track, but it would do so by downloading all data in a number of smaller bboxes rather than the data you’re only interested in.

I did not post it to diminish your work, just to update Polyglot.

Personally I’ve used overpass-turbo to remote control and import data into JOSM, which worked marvelously, as long as the metadata is included. My guess is that this will continue to work with your update to overpass api, so the need to duplicate this functionality in JOSM is weak.