Posted by Minh Nguyen on 2 January 2019 in English (English).

Oldenburg is a small town in southeastern Indiana, not far from where I grew up, where German is in some respects the official language. The town is proud of its German heritage. If you rely on a proprietary map for directions from Batesville to Metamora, you’ll probably miss a right turn at Oldenburg, which posts street names in German and only begrudgingly in English. 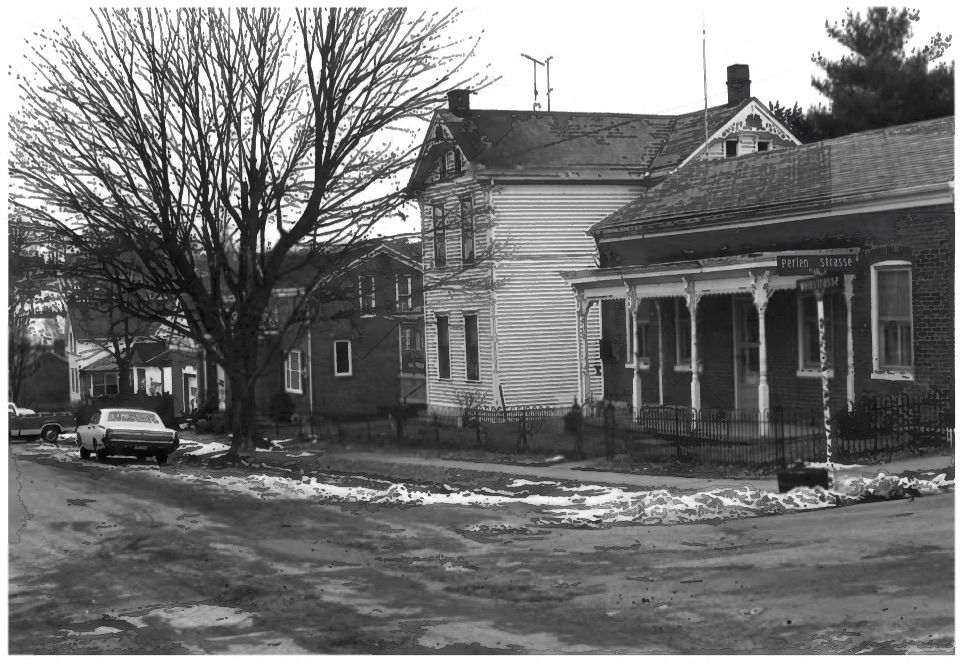 I don’t speak a lick of German, but when I found out that most of Oldenburg is included in a federally designated historic district, the town promised to be a good time sink. What better way to poke at a moat than to make a detailed 3D map of this Old World town, replete with German street names?

To be included in the National Register of Historic Places, a building needs to be described in a publicly accessible nomination form. In the case of Oldenburg, that means nearly every freestanding structure in town, plus a patch or two of sidewalk, is given a full historical and architectural treatment. The document includes building names (typically after the original owner), floor counts, roof shapes, construction materials, and plenty of details we don’t have established tags for yet.

(Like many NRHP submissions, the one for Oldenburg is in the public domain because it was first published before 1989 without a copyright notice or registration.)

There’s still some work left to do: at least one 3D renderer, F4 Map, randomizes attributes like building heights and tree leaf type when you leave those details out, and there are still a few streets whose German names I couldn’t ascertain (while trying to avoid copying out of Google Street View). Hopefully this post will inspire a mapper in Cincinnati, Indianapolis, or Louisville to make a pilgrimage to this former monastery town for some proper field surveying.

There are thousands of historic districts on the NRHP all across the U.S., and not all of them require translation into English. What other historically significant places await your micromapping skills?

This is fantastic! Wonderful work!

Beautiful work! Could you do a post talking through the process of locating other villages suitable for this treatment? I tried exploring the NARA archive but couldn’t make much headway.

Also, it would be great to hear more details about how to translate the written architecture descriptions into 3D building tags.

Could you do a post talking through the process of locating other villages suitable for this treatment? I tried exploring the NARA archive but couldn’t make much headway.

The vast majority of NRHP properties are individual buildings, which are also worth mapping, but if you want a good concentration of buildings to map, look for entries with “historic district” in the name. Many, but not all, of these historic districts were long ago imported from GNIS as leisure=park points. (The Oldenburg Historic District is missing from GNIS, so it wasn’t imported.)

If you’re looking for a particular historic district but can’t find it in the NARA archives, these pages list some alternative places to look. (Some of the linked sites have temporarily gone down due to the federal government shutdown.)

Also, it would be great to hear more details about how to translate the written architecture descriptions into 3D building tags.

The descriptions aren’t standardized; they’ll vary from submission to submission based on the author. In the Oldenburg submission, many of the terms are also found in the simple 3D buildings specification or F4’s mapping guide, for example:

(One of the spires in Oldenburg is topped by a German-style onion dome, but F4 apparently doesn’t render roof:shape=onion.)

There are lots of details about dormers and gables. This helpful diagram appears in the specification:

Some other assorted notes: