Update: The mechanical edit described in this diary entry has been discussed on the Belgian mailing list. You should never do an edit like this without prior consultation with and consent of the relevant community/communities. Also make sure to read the Automated Edits code of conduct if you plan on making an automated edit. OpenStreetMap is generally not welcoming those, even when they follow all rules.

All Belgacom/Proximus telephone booths in Belgium are removed from the streets. With changeset #32926155 those that had operator=Belgacom or Proximus have also been removed from OSM. 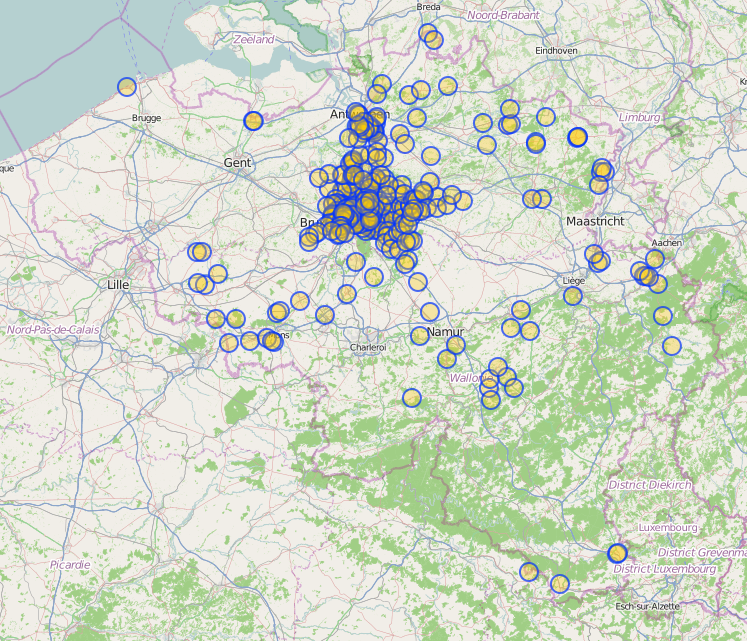 I used the following Overpass query:

This fetched all phone booths and also any ways they are connected to. No relations were matched, which was good. Then, in JOSM, I did the following searches to obtain phone booths that are member of a way:

I removed all tags on those 4 nodes.

Then I searched all remaining amenity=telephones and removed the nodes.

Note that at the time of writing there are still 320 other amenity=telephones left in Belgium. (Exactly the same number as I removed!) They haven’t been tagged with operator=Belgacom and should be manually surveyed and removed if necessary.

You are invited to add a note like verified that this phone still exists 2015-07-28 to any phones that you have surveyed, to prevent mappers from armchair-mapping them away. (They shouldn’t, but just to be sure.) An operator tag is appreciated as well.

Search for amenity=telephones in Belgium

What you have done is an un-discussed mechanical edit, and it is against the rules. You should never remove stuff from the map just because you make some general assumption (“I read in the news that operator X is removing their phone booths so I’ll go ahead and remove them from OSM”). Only remove something when you have personally surveyed that it is gone.

There are many reasons for this. One, the operator tag in OSM might be wrong. Or perhaps the operator tag is correct but the telephone company forgot to remove that one phone booth? Or another operator has sensed an opportunity and immediately replaced the phone booth with one of his? If you don’t know then don’t delete.

Also, you’re creating a false image of accuracy. If an area is not well maintained by local mappers, then the dismantled telephone booth will sit there on OSM for a while, and this is a sign that the area needs some love; I’d much rather have a local mapper fix the phone booth and while they’re there perhaps also brush up some neighbouring POIs, than having someone armchair-“fixing” the phone booth and therefore making it look like the area is more current than it actually is.

In short - edits like this don’t add value to OSM and should be avoided. Identify the four phone booths closest to your home, go out and re-survey those four, and you will have done much more for OSM than your clever armchair mapping described above.

I am aware of the Mechanical Edits rules.

I’m sorry, I forgot to note that this was something we have been discussing this on the Belgian mailinglist since June. There was not a single voice against this. In fact newer contributors not on the list began asking me if there wasn’t a way to automatically remove them, since it has been on the TV news that they’re all gone.

We are very very sure that there are no operational Belgacom/Proximus phone booths left. Any other phones were not removed, though we believe there are none left whatsoever.

And in fact I surveyed and removed the closest 4 before this edit ;)

I just did it for Mechelen, with Mapillary pictures. It would have been so much easier if the mappers had made pictures of the public phones. But even now not everyone agrees that pictures are important for even more reasons than to be able to delete.