Posted by Cyberjuan on 9 November 2021 in English (English). 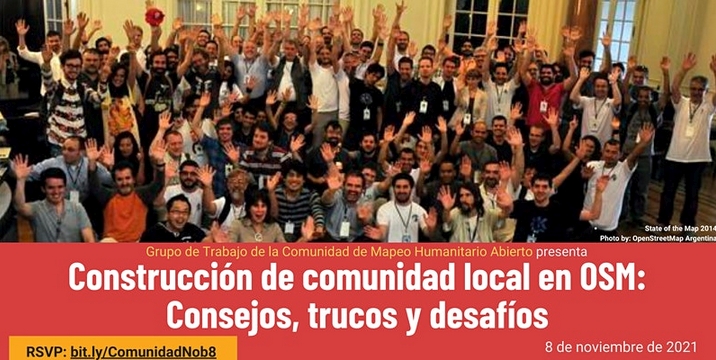 As in any event worth its salt, there is a Document -in Spanish- with the notes on the presentations, conversations and chats, in addition to the video, of course (the video is -again- in Spanish).

I used the aforementioned document to make a live tweeting of the event from the @esopenstreetmap Twitter account, and then it occurred to me to make a thematic summary of the event based on the same notes, in order to facilitate the generation of future actions by the leaders of the communities. That summary is what I present in this post.

I have not put the names of those who contributed each tip or comment, since that appears in the Document, but it could be added if considered necessary.

And well, let’s go with the thematic axes:

Although the axes of Community and Volunteering could have been one, I preferred to separate them not only because the concept of community is broader, and in some communities not all will be volunteers, but also because the management (and administration) of the volunteers requires some specific skills and knowledge.

On the other hand, when you talk about volunteers, you usually think of mappers, but there may be volunteers in other areas of the community, such as translation, software development, project management specialists, etc. Having volunteers in these areas will enrich our community.

Within the Training axis is Documentation and Translation, which in this case -in my opinion- are quite related at least in the current context of OSM.

Finally, I’d like to say that I hope that this summary helps both the OSM community leaders in our countries and the representatives of the OSM Foundation and Hotosm, to make the best decisions for the future of the community.

@Cyberjuan, thanks so much for this summary! I wanted to attend but, for personal reasons, couldn’t and this has motivated me to watch the video once it is published :D

Thank you so much @cyberjuan! Very great point on community and volunteers! :)