Want to get an idea about what contributions are happening in OSM in your region? Maybe you’re even looking for a way to better review map changes (hint, hint)? A good starting point is probably my latest-edits page tool. It displays all objects that have been modified during the last week alongside with their respective changesets.

One major drawbacks of the tool was that until recently, deleted map objects (and changesets consisting solely of deletions) were not displayed on the page. Now, deleted objects are displayed as faint “ghostly” outlines on the map. In the same way, you can now also see how modified objects looked like before the respective contributions happened. This can result in a nice looking “shadow” effect when for example buildings have been realigned to better aerial imagery.

Also, you can now select between the latest changes from the last day, week, or month, and directly zoom to the location of a particular changeset: 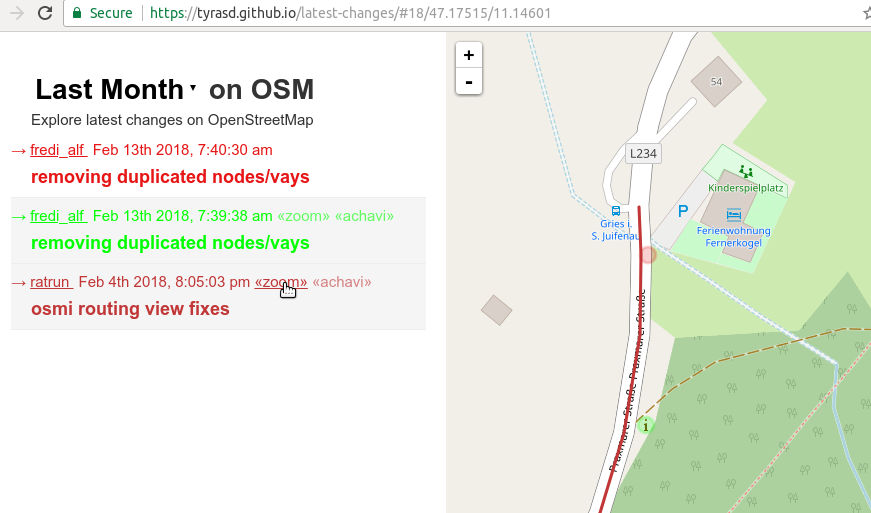 The tool still doesn’t show intermediate states of objects that have been modified more than once in the selected time period, as well as modifications to relation objects.

Programmatically, this new version is implemented by using an Overpass augmented diff query (switching over from a “regular” OverpassQL query using the newer statement) and some massaging of the returned data to get them properly in shape (it sorts the data into two buckets – one for the state of the data before the respective edits and one for the current state – then uses osmtogeojson to generate GeoJSON which can be put on the map).

Thanks a lot for these improvements. I’ve been using the tool for several months, as it’s useful to see what’s going on in an area. It has helped me identify vandalism too.

Being able to select a time range is useful too. Please keep up the good work :)

I discovered your tool recently. I have been using this tool to check recent edits around my neighbourhood. Nice tool for the community. Thank you for this.

Nice tool to monitor modifications in our area. It could be improved by focusing on only data modified in the area. Since Overpass returns objects edited in the area, there could be an option to only show data edited inside the selected bbox. This would take care of huge changesets that while they cover the BBOX we look at, might have no or minimal objects modified in the area.

For example, the link below reported today only one changeset. It covers a large area in Canada an north of USA and affects a few hundred nodes, ways and relations. https://tyrasd.github.io/latest-changes/#12/45.4548/-73.3092 https://openstreetmap.org/browse/changeset/56302536 And Achavi cannot help in such cases https://overpass-api.de/achavi/?changeset=56302536

To facilitate monitoring of local areas, it would be great that both Latest-Changes and Achavi offer the possibility to see only objects edited in the BBOX.

It could be improved by focusing on only data modified in the area.

@PierZen: I’m not sure if I got your message right, but the Latest-Changes tool should already do exactly what you suggested. Also, I can’t seem to get the mentioned changeset popping up when opening the latest-changes link you posted…

If you click for last month edits you should see in the list Matthew Darwin Feb 12th 2018, 1:47:42 pm «zoom» «achavi» Fix validator errors. It was easier to look at yesterday since there was only this changeset listed. With the Changesets viewer in JOSM, with the same BBOX, we can see that there is no object to visualize inside the bbox, but some in towns 10-15 km from this town.

But the area actually contains an object that was modified in the changeset: https://www.openstreetmap.org/way/101781403 (a typo in the tag contact:website was fixed). Not sure why it doesn’t show up on “the changesets viewer in JOSM” (btw: never heard about this, is it a new plugin?) … maybe it’s a bug/deficiency on their part?

Yes it has been added to JOSM recently. https://github.com/JOSM/changeset-viewer

When zoom-out in JOSM, it is hidden behind a roadway ref. Zooming-in to the building, I could see it. I will open a ticket for more visibility of the icons.

You did great improvements. With an ability to select a time period, it became a much convenient tool.