Last year Joost provided some interesting statistics on the OSMF membership numbers by country and how these relate to mapping activity. In other words: How far the OSMF membership in their geographic distribution represents the active mapping community.

Two things that need to be stated in advance:

So all this needs to be taken with a grain of salt but none the less how things have changed since last year is something interesting to look at.

In addition to the values Joost calculated last year i also added another column for the absolute member count mismatch - i.e. how many additional members or too few members come from a certain country compared to what would be a proportional representation of the active mapper community.

Here are the numbers for the top 45 countries sorted by OSMF member count (first) and sorted by active mapper count (second, that is the equivalent to what Joost showed last year).

For explanation of the columns: 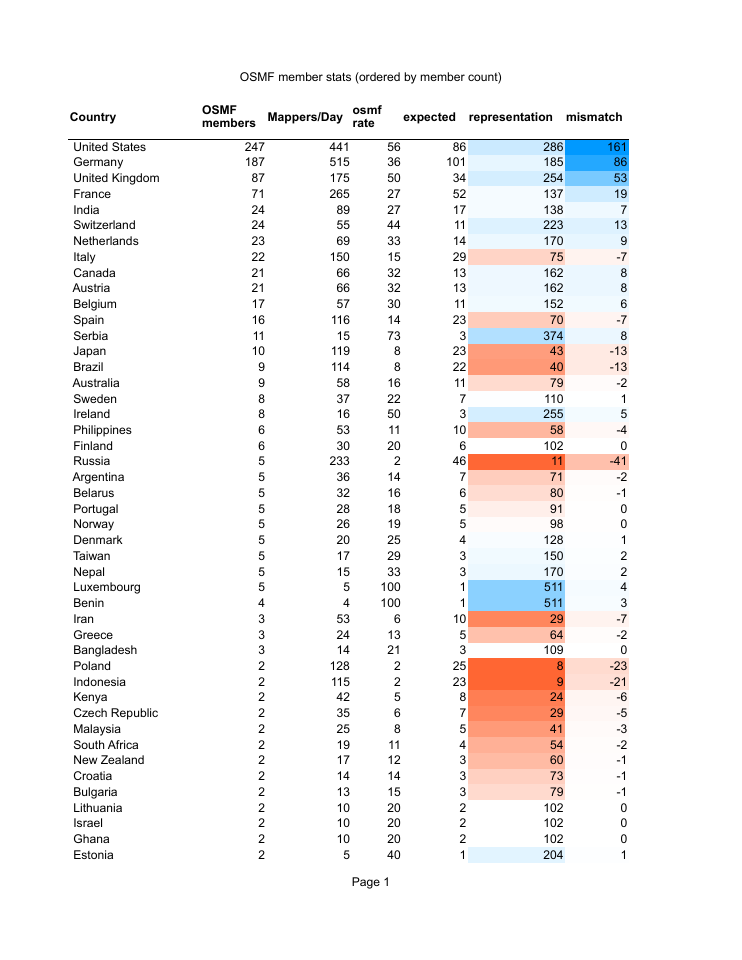 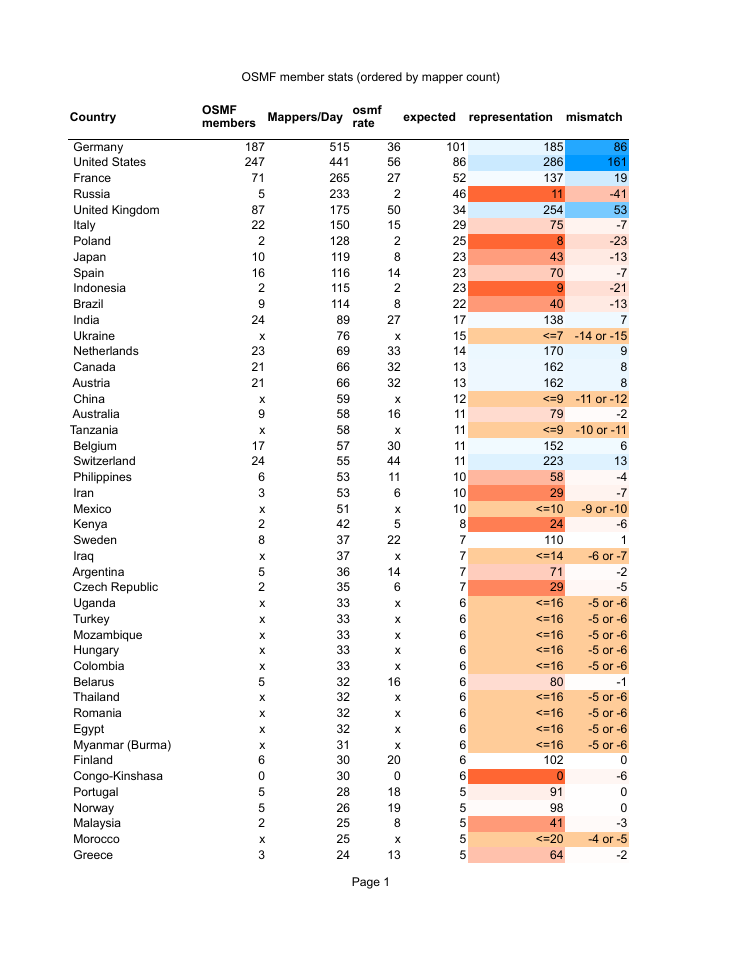 In the second table countries with only one or zero OSMF members don’t have the actual member count shown for privacy reasons (though i am not sure if that is necessary since the OSMF membership lists can be accessed on request anyway).

You can also get that in SocialCalc format (to be used on Ethercalc or Framacalc via clipboard) or in CSV format.

What can we see from this year’s numbers?

I also got the numbers on members who made use of the fee waivers and their regional distribution. We have:

All of this does not consider how many of either mappers and OSMF members are hobbyists and how many have a professional connection to OSM. Likewise it is worth considering that also non-mapping community members should be included in the idea of proportional representation.

It is my hope that with the universal fee waiver for active mappers that hopefully will start next year (see my diary entry on the vote for that) and that will allow mappers to become OSMF members without paying a fee and without the need to claim to be needy that the significant under-representation of large local communities will decrease.

very interesting, although I believe it would be more informative to have the total of different editing users per country and year put into relation with the OSMF membership, because it is a big difference if these 500 users a day are the same as those the next day, or are different ones.

I live it when I don’t have to do the same thing twice. Thanks for picking this up Christoph. One note: MWG has the practice to censor small numbers of OSMF by country, because it becomes a bit too easy to quess which person could be behind that number. BTW, MWG member Thomas was also working on some similar stats, not sure when he’ll be able to publish them

I have not shown if a country accounts for zero or one OSMF members. I had a short exchange with Michael about that after publication and he mentioned that they would have liked to also anonymize up to two members but agreed that it makes little sense to remove the information after it has been published so i kept it. If that is made a general policy i have no problem with that.

By the way - the most work intensive part about this kind of data processing are different forms of country names and matching them. :-(

@dieterdreist - there are a lot of very interesting possibilities of other measures for the mapping community activities in a certain country. In particular i would like to see statistics that exclude all accounts that have less than something like five active mapping days to only consider serious mappers and exclude all the typical SEO spam throw away accounts.

The “best” measure would be based on the home location I’d say. There’s only a few users that set that themselves, but Pascal’s hdyc profile makes a very good guess by way of the “main activity area”. I’d like to see some stats based on that. And as you suggest, only including users with at least a few mapping days would be good.

Can’t help myself but play around with the numbers. I put your stats together with mine from last year. Here’s the growth rate of daily mappers by country for the top 20. Thanks for this. Is it possible to get the numbers of renews, churn (not renewed) and the rates by country?

I have only asked for and therefore only received numbers on current paid up memberships.

In general the more specific additional data is the more serious potential privacy concerns are. It is ultimately up to the MWG what to release but i would be a bit concerned about that.

Things that i would find interesting are:

The last one would provide information on how large fluctuations in membership are in an integrated fashion which is less hairy than looking at the rates.

So what are we doing “right” in Russia?