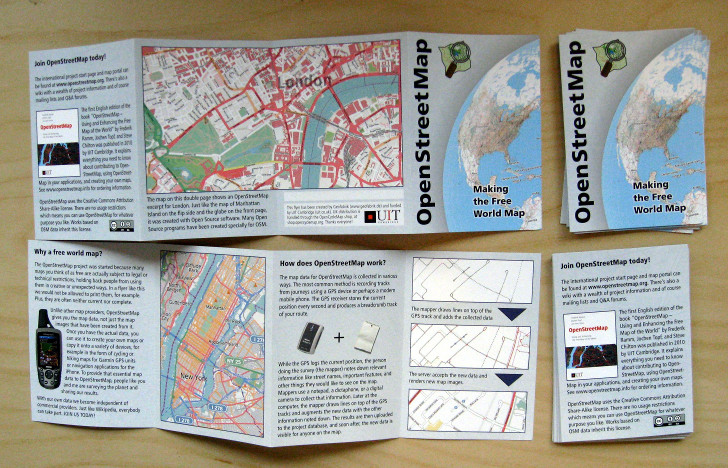 tl;dr:
You will need to install a combo of ubuntu font, a suitable Sans-Serif font (OpenSans family font is available via GitHub) + Inkscape in addition to mirroring locally the current GitHub OSM files. Then use Inkscape to import one of the SVG files, Save-As a PDF from it, and print from that. Rinse/repeat with the other SVG file:–

Updated PDFs + SVGs (identified by ‘r15371’) are currently available at https://github.com/alexkemp9/openstreetmap-promotional-leaflets. In addition I’ve made a pull-request (a request within Github for the original author to consider pulling-in my changes), so they may soon be available from the original source (next line).

Andy Allan took the trouble to provide on GitHub (almost) all necessary components to print some funky little OSM flyers (information leaflets to present to folks on the street who, whilst you are mapping, say “What do you think you are doing?”) - see above, or at OSM Promotional Leaflets. Andy even offered to post some leaflets to me, and in the end I distributed ~4,000 of them across a period of 14 months. I call that outstanding practical assistance by Andy, and some excellent promotion for OSM.

As I get ready to do some more mapping in 2019 I need some more leaflets as there are just a handful left. I approached John E Wright printers on Huntingdon Street, Nottingham armed with the GitHub url + filename, but their Mac did not have any of the necessary fonts mentioned within osmflyer1.svg nor osmflyer2.svg, and display black rectangles instead. Worse, at home I discover those SVG files do not display correctly within any browser, nor GIMP, showing horrible black rectangles wherever text should be within the leaflet.

…and why rsvg utilities such as rsvg-convert + browsers show large black rectangles when SVG1.2 features are included (see also this example of a flowroot bug). What seems particularly egregious is that when exported as a so-called “standard” SVG Inkscape still retains the deprecated v1.2 features. Ah well.

The current W3C Recommendation version of SVG is v1.1. A working draft for v1.2 was begun on 15 November 2002 and abandoned after 8 releases on 13 April 2005. The current working draft version is SVG2, which means that v1.2 is now deprecated (see also this WikiMedia bug report). That is a particular issue because all browsers (including the W3C Validator) only recognise SVG1.1 features.

All SVG files in the GitHub collection are dependent upon Inkscape and, in particular, contain flowed text. Current SVG clients & browsers are version 1.1 and do not recognise flowed text. Flowed text — text which wraps within a defined area — was introduced within the (now deprecated) SVG version 1.2, and Inkscape makes extensive use of v1.2 methods. In practical terms that means, by themselves, that the osm SVG files are useless; they require Inkscape.

This is how-to convert the osm SVGs from non-std SVG1.2 to std SVG1.1:

With the SVG loaded into Inkscape:–

Please be warned that all word edits need to be made before unflowing the text, and also that the process is very buggy, particularly in our case where emboldened text is embedded within a line. Fortunately there is a simple way of side-stepping all these bugs (either follow below steps, or edit from the ‘r15371’ SVGs as detailed at top):–

That PDF appears good in a PDF viewer, GIMP & Chromium.

The following fonts are embedded within the PDF:–

I never added DejaView via Inkscape so it must be an alias replacement for sans-serif (see below).

The SVGs contain Frobisher fonts (a proprietary font). Those fonts are not used within the PDFs.

So, display is still buggy for SVGs produced under Inkscape, but the program should be capable of producing PDFs effective for a printer. We shall see if that is true in the New Year.

I’ve used many DTP editors before but Inkscape is a bit opaque, made worse by the fact that after exporting to a PDF the filetype was switched from SVG to PDF (which should be read-only) (doh!).

Andy has asked me to do a pull request on the GitHub package (11 Jan: now completed), adding links for the fonts used for text in the SVG (it would have been wonderful if the graphics could have been vectors rather than PNG files, but I guess that that is currently asking too much). I will certainly do that, and will also add the PDFs to make it even easier for future users once I have found someone to print them so that I can confirm that they are fine (the University printer has given me a price that is twice what Andy paid!).

These are the fonts:–

This seems to be used only in specialised circumstances (it is not used in a default EN leaflet).

Some translated text is in the Bitstream Vera Sans font, which is provided via gnome. The link above gives a link to a FTP site with multiple downloads available for version-1.10 of the font-family. askubuntu gives concise help for installation under ubuntu/debian/devuan (for me under Devuan the fonts were placed within /usr/share/fonts/truetype/bitstream-vera-1.10).

Title + sub-title text is in the ubuntu font, which is the signature font for the ubuntu distribution. The link above gives a ZIP download for version-0.83 of the font-family. askubuntu gives concise help for installation under Ubuntu/Debian/Devuan (for me under Devuan the fonts were placed within /usr/share/fonts/truetype/ubuntu-0.83, though many other locations are available & legit to use; $ sudo fc-cache -fv will then re-cache all the fonts; re-start any apps using fonts).

The printer said that he prefers PDF files, preferably in X1A (2001) format, and this is a good example of why that is his preferred file-format.

The original printer still has not provided a quote, but 3 other printers have responded with quotes up to twice what Andy said his Germany-based printer charged. Yikes. Two printers have independently said that they want a PDF with a 3mm bleed for this kind of job, and that is what the newly-uploaded PDFs have. They also contain all embedded fonts, so should be print-ready.

I looked on the GitHub, but it seems the actual text, or the total design files for the leaflet, aren’t available. I’d like to print these at home for myself. Can someone share the design files, or provide the text data so someone can create a derivative of it that approximates the original idea?

All of the text is within the SVG files. All of the other files (PNG, etc.) are referenced inside those SVG files. Here are the links for you to check them out for yourself (hint: SVG files are plain text):-

Thank you! I missed that somehow, probably thought the svg was an image. :P

AIUI Frobisher isn’t open source. (As the name would suggest, it’s very similar to the renowed Frutiger, which also isn’t open source.) However, Open Sans is pretty close in appearance to Frutiger and would probably be my first choice for an alternative.

Per my use of WhatTheFont, the closest fonts or font families that could be used to replace Frobisher are the following: FF Transit Std, Frutiger, Humanist 777, Interval Next, Adora, Neue Frutiger Pro, Delargo DT, Lina, Bernino Sans and Schnebel Sans.

Unfortunately, most of the fonts that I mentioned aren’t open source. I’d either go for Open Sans (per Richard) or use Gill Sans in this case.

OSM UK has some flyers left. Happy to send a batch. Email me at rob@osmuk.org and I will arrange it. I’m hoping to make the New Year/January meeting Jerry advertised so can pass them to you there if you like?

Thanks for the offer, RobJN.

I’ve got the bit between my teeth now. My grandchildren both have their birthdays in January, so I’m unlikely to be there.

You really should never post your email address on a public website; far too many scrapers that pass such stuff to spammers.

Good work on the distribution and modification!

They require Inkscape to be effective (which is kind of in complete opposition to the premise of the open-source movement).

Hey, at least it requires open-source software to edit, not like open-source projects that require expensive commercial software. If it had been produced in InDesign, you couldn’t even think of opening it on Linux.

Inkscape’s got its quirks. I live in it, so those quirks seem natural to me in the same way that some people believe JOSM to be usable software. Using Inkscape for this flyer was a slightly odd choice for a DTP job, as Inkscape’s an illustration package.

¹: anywhere except North America, that is. We use archaic paper sizes here that are incompatible with the rest of the world.

I created https://github.com/gravitystorm/openstreetmap-promotional-leaflets/issues/4 to suggest improving documentation, make finding this easier for other people who will attempt to run reprint and and to notify author that the published materials are still useful.

Just for your information: Already some years ago I did a transformation of the OSM leaflets from the Inkscape to Scribus format. During this process I also have substituted the font dy a freely available one (Droid Sans).

All this is in this repository: https://github.com/scubbx/osm-at-flyer