MAPS.ME is now an editor

Which popular editors do we have now? According to statistics, three of these: iD, JOSM and Potlatch 2. The next four editors are mobile: Go Map, OsmAnd, Vespucci and Pushpin each have a thousand of users. Today there is another one, which now has less than a hundred users, but aims to go for the first place: MAPS.ME.

As you might know, MAPS.ME is a popular app for using OpenStreetMap data on a phone or a tablet. It has geocoding, routing (using OSRM engine), bookmarks and 3d-buildings. It runs both on Android and iOS devices, and it is very fast. Obviously it works offline: you just have to download some countries. Besides speed, MAPS.ME is known for simplicity: even I can understand which buttons to press, without examining every control and menu item first.

Just now we have released the first major update this year. It has better geocoding (and reverse geocoding), smaller regions (no bigger than 70 MB, most are below 50) and, the most important change, now it can edit the map! In most POI cards (click on a POI and get one) there are two new options: «Edit place» and «Report a problem». The first one opens a simple (as in, easy to understand) editor for relevant fields: name, address, opening hours. The second one is for leaving OSM notes. Also there is an «Add a place» option on the menu. So yes, it’s an editor. 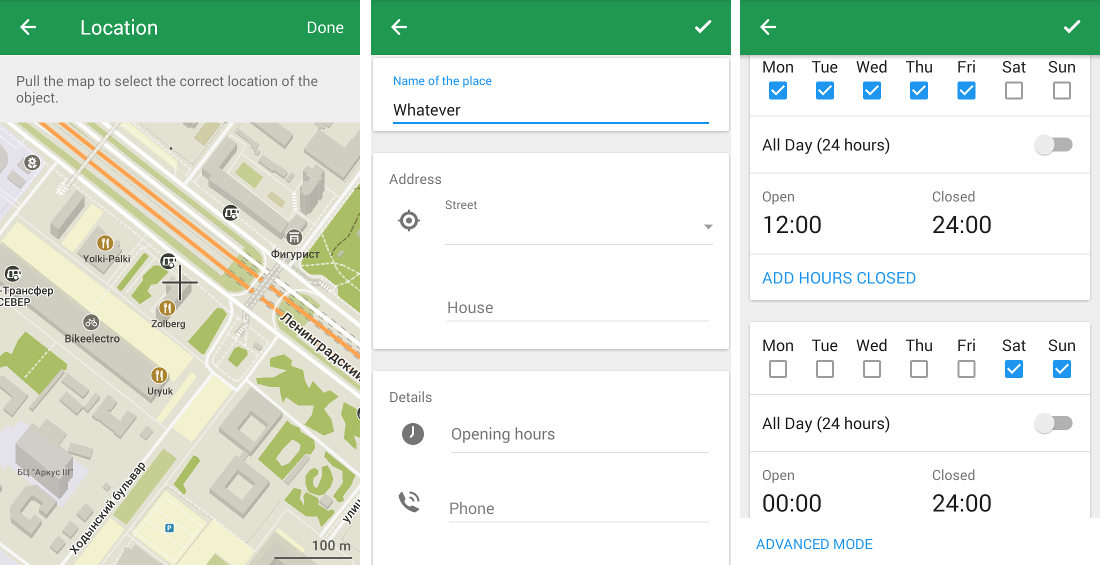 We decided not to build proxy servers, but to connect each of our users directly to OpenStreetMap. Which means, there is a sign in / sign up option that pops up when you edit a feature. It uses OAuth, obviously, and for new users it promotes using Facebook / Google authorization. So, every MAPS.ME user that edits the map submits their confirmed e-mail, so you can contact them. It works, as I have contacted some of the users during the beta testing.

OpenStreetMap currently has 25-30 thousands of users editing monthly. MAPS.ME has more than 7 million monthly active users. So I assume that in time it would be the most popular way for adding and editing points of interest in OSM. You can monitor edits made with the application: that service will most likely break when there is more than 5 edits per minute, but for now it works. When you see a mistake, “Level0” button is the fastest way to fix it.

I’ve been using MAPS.ME editor for two months, and it is good. I have finally added and refined POIs around my house, and I add new objects each time I go somewhere. Because it is so easy, and because I use the application for navigating anyway. I have been saying since Autumn that mobile editing will be the next step of OpenStreetMap development, and now we can witness it in real time.

If (when) you encounter a bug, please write to bugs@maps.me. The next release is planned for the end of the month, so with your help we can make the editor even better. We know some of drawbacks: incomplete type list, users can add the same feature multiple times, no notifications for sent changes, non-native facebook/google authorization. Most of issues will be fixed by the next version, but we would like to hear your opinions on how to make OSM better with this new editor.

Happy editing, and we’re sorry you will have nothing to update around your house in a month :)

I’m headed out to give it a try.

This is amazing, maps.me has been the most user friendly OSM app i’ve used by far. Going to try editing tomorrow.

I do believe this will be my go to editor when I’m out with just my phone. Simple and easy to use. Now when we have a mapping party, we can suggest Maps.Me along with GoMap!!

One big suggestion would be to include the ability to search for tags much like iD and GoMap!!

As you update the type list, be sure to include restrooms aka toilets to the list. It was one of the features I tried to add today. New public toilets in Mount Vernon, WA.

This has a nice interface with the relevant info front and center. This should allow for simple editing, mainly quickly adding a POI. It has the address, phone and opening hours front and center which is the information you want if you want to get information on a store / poi. I used Vespucci, but this seems even easier for adding POI’s. Great job, as an editor it does one thing and well and as such it carves out a sorely needed niche in mobile editors.

There is one problem I do foresee, since the map data you download is out of date(Up to a month), it is possible you could be adding POIs that all ready exist.

A suggestion would be to add a filter / search and include presets for well know chains like Walmart, McDonalds, Subway. Also having synonyms for example salon and barber point towards hairdresser. For mappers that have recently added POIs, having a recent tag list so you don’t have to re search if you are adding benches or restaurants. The above should make it easier for experienced mappers and experienced alike. You are on the right tack though, the UI is clean and to the point which I like.

So question two: what are the chances of foursquare like Q&A prompt UI as a followon; with a bit more understanding of certain venues (bars, restaurants, hotels, etc)? OpenGeoQuestions is there, but it doesn’t necessarily seem to have the same userbase.

So question two: what are the chances of foursquare like Q&A prompt UI as a followon; with a bit more understanding of certain venues (bars, restaurants, hotels, etc)? OpenGeoQuestions is there, but it doesn’t necessarily seem to have the same userbase.

Redsteakraw, thanks for your comments. Most of these issues are already on our to-do list. Interesting thought about presets for common international chains. Starting tomorrow there will be an updated unofficial daily maps build: http://www.openstreetmap.org/user/Zverik/diary/35658

CloCkWeRX, it’s unlikely Q&A will be useful for OSM, since most answers users know aren’t useful for the map, like lunch prices or background music style :)

Wow, nice. We will use it for out mapping party that we will have on the 17th of April in Cluj :)

We’re seeing a definite spike in new editors near me in the UK, compared to (say) 6 days ago:

What’s really interesting is that there’s actually roughly twice as many new mappers using iD as last week, not even counting the new MAPS.ME ones! It’d be interesting to see how widespread that is.

Interesting. I started using Go Map!! about a month ago because JOSM was largely unavailable to me while travelling. I’ve downloaded maps.me and will give it a try.

Yesterday we had the largest number of editors in a day ever at 4830 (previous highest was in the aftermath of the Nepal Earthquake last year) http://osmstats.neis-one.org/?item=members&date=7-4-2016

I can confirm the stats: Today a new mapper in my neighbour town. First edit with MAPS.ME, a few subsequent with iD.

I don’t have data on my phone - so I did a change then when I got home I tried to upload it, I don’t see a way to do that.

but I don’t see how to send it, now that I am back on the internet.

in reply to my own comment - the change finally went through, it just took 45 minutes - so I guess as it says in the help docs - it just passively checks then uploads.

First I saw maps.me edits in my newsfeed: this got me curious what did you guys do there in the app. Great work!

Maps.me is still quite lightweight and very fast at the moment (which is the main advantage over any other offline osm-app). The only thing I worry about: it gets more and more specific features, so we may get some Heavy-Any-Purpose-Osmandish-Battery-Eater one day.

Diomas, don’t worry: we constantly test battery usage, and it’s no bigger than half a year ago.

You said: So, every MAPS.ME user that edits the map submits their confirmed e-mail, so you can contact them. It works, as I have contacted some of the users during the beta testing.

So are you saying that edits are coming in from people who are not registered as OSM users, but are maps.me users?

A sentence before that: “We decided not to build proxy servers, but to connect each of our users directly to OpenStreetMap”. How can edits come from unregistered users?

what is your project for the update data? because the time of updating is very to long more than one month to have it. it isb not possible to have it quickly ore after every week? t-ank you again for the work that they are doing.. thank you

Loving Maps.me here in Tanzania, but wish list of categories was more relevant.

Also wondering when map will be updated and whether this will happen automatically.

Just wanted to say thanks for this, it is having a significant impact in Sofia, Bulgaria. The community here is quite small, and since maps.me became an editor, there has been a marked increase in the number of contributions. Some of them need to be corrected afterwards, of course (names in foreign languages, “this is my flat”, etc), but overall it is helping push the project from a small number of expert mappers to a larger community of more casual mappers, each of which brings fresh information. I think this is a net improvement.

Thanks saintam1! Also, you can now monitor edits in Bulgaria: http://py.osmz.ru/mmwatch/?country=Bulgaria