Recently there has been quite prominent press coverage of mountain rescue incidents in the English Lake District involving people using various outdoor activity apps (The Guardian, Grough). It turns out that these incidents involved paths mapped on OpenStreetMap, and have been discussed by the local UK community. 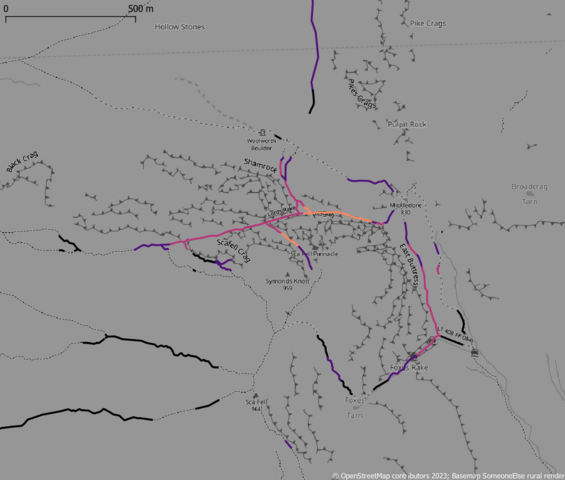 In general the Lake District is a fairly benign environment for walkers with the bulk of the upland paths being heavily used and for the most part not difficult (SAC Scale mountain_hiking). A number of popular walking routes are well known to be more difficult : Striding Edge, Sharp Edge, Lord’s Rake, Jack’s Rake. However, there are other much less well-known harder trails and scrambles. As OSM data gets richer, the more likely such things will get added. In addition, contributors may be tempted to add routes that they have used which either have traces on the ground which are either vestigial or none existent. It’s also possible that paths have been added from old maps, or even from poor quality GPS traces.

I therefore thought it might be useful to try and scan any walking paths marked on OSM within the Lake District which may be problematic. The approach I have taken is to find paths with a steepness of 25 degrees or more.

Here I describe my first pass attempt, which has various deficiencies, because the elevation model I have used is quite coarse (25 m elevation pixels).

To determine steepness I downloaded the basic terrain model from Ordnance Survey Open Data : Terrain50. This comes in a range of formats and packages including raster DEM and contours. Some of these are zipped files containing multiple directories themselves containing zipped files. Most data is stored at the basic level of a 10 kilometre grid square, known as a hectad (SK53 is one such).

I downloaded all DEMs for the NY major grid square (which includes the Northern two-thirds of the Lake District. I then built a virtual raster encompassing all one hundred tiles in QGIS and saved this as a .vrt file. From this one can use basic raster tools in QGIS to do various manipulations of the data: hillshade, aspect, slope, contour extraction etc.

For this I created a slope model. I then used one of the “Processing” tools “Reclassify by Table” to assign slope values over 25 degrees to buckets split by 10 degree boundaries. I then converted the reclassified raster slope data into polygons.

I extracted all ways with a highway tag containing path, track, footway, bridleway or cycleway within the Lake District National Park using Overpass. Within QGIS I then clipped these by the polygon layer representing steep ground, to obtain a basic set of paths to examine. Note this does not examine the steepness of the path, so a path which is pretty level and just traversing across steep terrain (e.g. Wasdale Screes) still shows up. Also the coarseness of the DEM inevitably catches paths on top of, or at the foot of, cliffs. I will therefore do a second pass with : a) a much finer DEM (Environment Agency Lidar, 1m); and b) calculate actual path steepness with heavily noded paths.

In order to split the paths by the steepness of the terrain I loaded both the steepness polygons and the clipped paths into PostGIS. I had to repair a number of the polygons, but this allowed me to split the paths into sections each labelled by the apparent steepness (using the lower bound of the range, so a angle=30 means between 30 and 40 degrees). The image at the top shows paths around Scafell and Mickledore, including Lord’s Rake.

I’ve put the geojson of these path sections on umap if anyone wants to scroll around. Undoubtedly, tagging can be improved on some of these.

PS. This is very much a “quick-and-dirty” first attempt. The proper way to do it looks to be to assign elevation values to individual vertices of the paths, but that then requires reassembly of the path for visualisation purposes.

We need to get these difficult trails and scrambles out of the highway=path tag. Tagging these as path is like tagging a rough logging track as unclassified. The vote for highway=scramble may have failed, but we need to call them something else. Whether we settle on trail, trek, hike or another term matters less than making the fundamental distinction between a easy to follow path and something more demanding. It’s clear that relying on one sub-community’s somewhat obscure secondary difficulty tags is causing recurring real world issues.

@InsertUser: completely in agreement, scramble might not have been perfect but it would have avoided this type of incident.

Nice work! Around here in San Diego, we could use this data to discuss with our land managers the suitability of the utility roads they have designated for recreation. Grades >25% are not fun!

@Kai Johnson: really nice to hear that this has resonance elsewhere. Looks like California has reasonable Lidar coverage, but not sure about other DEM resources in the US.

I’ve now done the more detailed analysis, but I need to do some work on the visualisation and rebuild the DEM (not all areas had 1 m Lidar, so I need to add in some 2 m Lidar to fill the gaps). Once I’ve done that I’ll write up the work-flow.

At present no real surprises in the immediate area I’m looking at (NY20), other than a path which certainly didn’t exist 20-odd years ago, but can be followed on imagery.

TIL hectad…doubt I’ll be using it too often.