Cycling highways are a ‘thing’ in Belgium and The Netherlands, or rather, they will be. 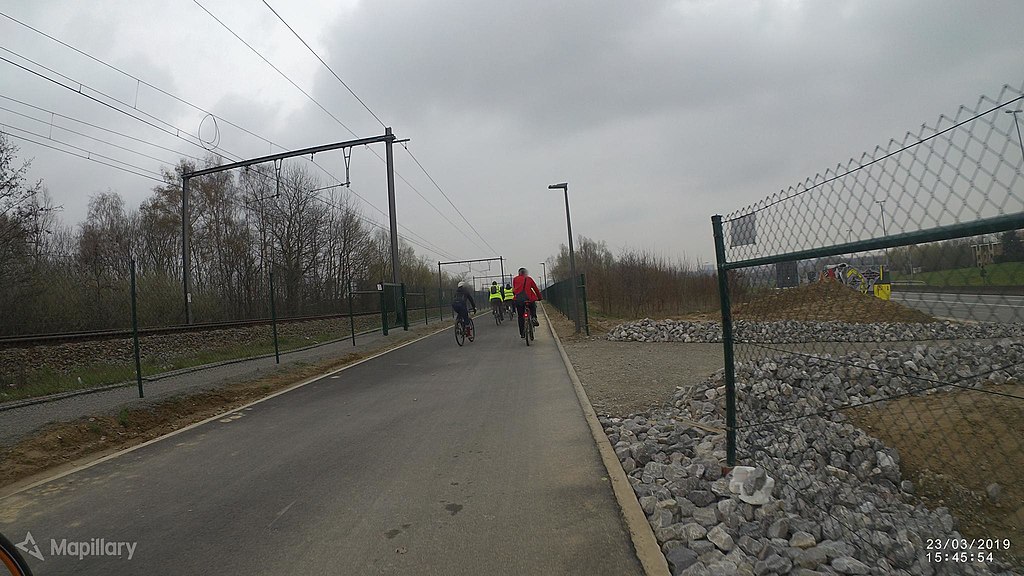 Some stretches already exist, others are still in the planning phase.

The intent is to have them as bidirectional ways for cyclists, ideally 4m wide, without car traffic. Often alongside railroads or canals, sometimes instead of disused railways. Where they cross motorways bridges are planned.

Usually they are also open to pedestrians, horseback riders, skeelers, etc. Some were not open to speed_pedelecs, but that is getting resolved.

In practice there will be certain parts that will always be ‘shared’ with car traffic though and where they cross busy national roads the cyclists won’t have priority for obvious reasons. Building bridges and tunnels everywhere is not possible either.

So more than half of them are still in the planning stage. On OpenStreetMap I like the ability to show where they are planned.

I also like to show what the alternative is that can be used today. Obviously we want to avoid unpaved, cobble_stone/sett and even cycle ways along busy car highways. But often that is simply not possible. Things will improve, but it’s going to take time.

I made the mistake of trying to map each cycle highway from beginning to end with a single route relation. It became apparent that that simply does not work.

I also like the route relations to be a continues stream of ways.

It’s a lot of work, but now we are able to show which parts are already usable, which parts are proposed and how to ride today to bypass the stretches that aren’t realised yet. 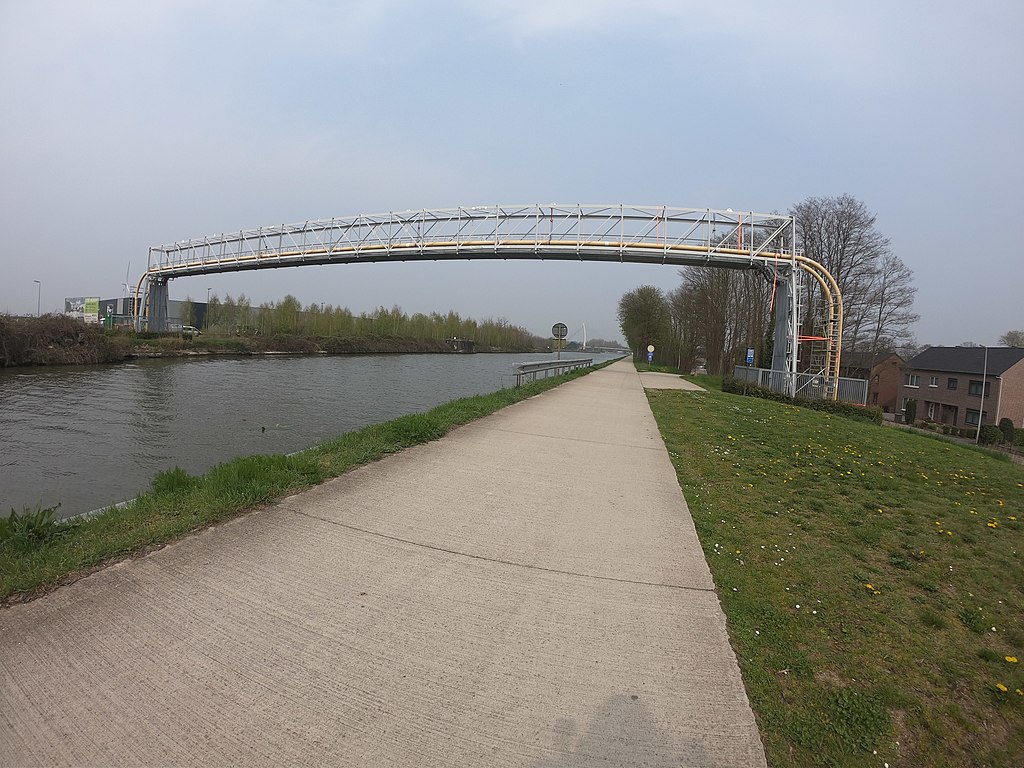 I will use F78 as an example. It follows Zuid-Willemsvaart for 55 km from somewhere north of Maastricht to Pelt (formerly Neerpelt/Overpelt). For 32 km it’s a rather dull ride along the canal. Near Tongerlo/Bree things get more complex. Currenty there is a steep staircase of 15m after riders pass a smelly water treatment facility.

(The whole ride is on Mapillary. My task was to follow the planned trajectory as closely as possible, so what I propose through Tongerlo is currently missing on Mapillary. It’s not easy to get there - no train stations in that heck of the woods - so it might take a while before I get a chance to go back)

The plan is to create a more bicycle friendly connection at that point, but it’s simply not there yet. So I propose to ride through the center of Tongerlo as an alternative that can be used today. (It might even be a better alternative long term, but that’s another discussion)

Tagged with state=proposed on the route relation, which makes it display dashed on the cycle map and route planners won’t use it.

Most cycling highways are not as monotonous as this one. Often it’s a combination of dedicated infrastructure combined with mixed traffic. The plan is for those to become cycle_streets, where cars are not allowed to bypass cyclists and where the maximum speed is 30km/h. Of course speed pedelecs can’t ride 45km/h there either.

So I’m using 2 superroute relations and 4 route relations to describe what is already realised, what is planned and what is the alternative. For most other cycling highways it means a lot more route relations. Flexibility comes at a price.

One could argue that the unrealised stretches shouldn’t be on OpenStreetMap yet. I beg to differ. I think they are interesting enough to map. They will be realised, either soon, or no so soon. Work in progress.

Here’s a query that shows the four subrelations at the same time: http://overpass-turbo.eu/s/WZE I don’t see why not to put the “omleidingen” and the “wenslijn” both in the same superroute? Those two are the same thing, it’s just that for this one leg you have two variants. Right?

For relation 11479948 I understand that this is your personal opinion of where you can cycle now. That’s not really how we map and I think anyone who is bothered by it would be in their right to simply delete this. To make it less likely that someone should be bothered much, this type of detour should have some very clear tags.

I also don’t really understand how exactly you differentiate between “proposed” and “realized”. I don’t think there’s any actual waymarks on this route, right? So is it simply “if there’s a section that still needs to be built” (like https://www.openstreetmap.org/way/834756731) then you make a decision about which part of the route becomes unusable? Because again, that would mean “mapping your opinion” - you might want to avoid stairs, other people might want to avoid sand, others everything that’s not smooth asphalt.

If my assumptions here are correct, I would consider this alternative: - all routes that are not waymarked are “proposed” entirely - only when there’s an official detour, we map the detour

This has some advantages: - it’s a better fit for OSM - it’s much less work

The disadvantages are minor: - you can still track the state of realization by monitoring the tags of the ways within the relation - a data user gets realistic data: “this is a place that in the future will be nice for cycling” - they can still use that info to guide routing, but avoid sections that have problems. Decisions about that can then be based on user preference.

Would you consider such an alternative?

While I get your point Joost, from my perspective as someone who also bikes a lot, having a predetermined “good” alternative route that’s actually manually picked by someone instead of whatever the routing engine spits out; seems nicer.

Also an interesting thing to think about is what fietssnelwegen.be shows as alternative route although - Might just be whatever is closest and not really that bike friendly - Isn’t mapped physically either

Imho, there is no place in osm for “favorite” routes. If you want that, go to alltrails or wikiloc. If segments of a cycle highway are missing, a good bicycle router should be able to find a good alternative based on the tagging. It should pick separate cycle tracks, or roads where cars are not allowed to drive fast, avoid traffic lights, look at the surface tags, etc.

This has been discussed on int. mailing list of fora in the past. Always with the same outcome: only objective criteria in osm

I’m late to comment here, but I came back to your diary post after noticing the proposed cycling highway and detour on OSM mapped in my hometown. My input: * I have no problem with mapping officially proposed cycling highways as “proposed”, even if this does not meet the “what’s on the ground”-rule. The only weird situations are where it’s already certain that the proposal will not make it. Municipalities are kindly asked to reserve space for the cycling highways, but some of them don’t really care and allow new developments on the proposed tracé. In these situations, we could keep the officially proposed tracé, although it might look a bit silly. * When a proposed cycling highway is not signposted (yet), it should not be mapped as a cycling highway. I see this is not the case at the moment: proposed cycling highways that are not realised on the ground are already mapped as cycling highways. Be aware that it could even be unresponsible to lead cyclists to these unrealised (sometimes unsafe) stretches and not to safer alternatives. Can we agree these segments should be remapped to a proposed status? * I agree with Marc en Joost that mapping suggestions as “detours” should not be done in OSM. These can indeed by very subjective and if there’s no sign in reality saying “detour”, it should not be mapped as such. I came across one where I would definitely suggest another detour, but my opinion has as much/little value as others opinions. Can we leave these detours out of OSM?