The group of railroad crossing challenges listed in the previous diary entries is now complete. Many people worked on these challenges to make this happen. The tasks seemed to get more difficult as the challenge neared completion, since each task would correct a single crossing at a time.

Many of the tasks involved original TIGER highway crossings with poor alignment. I also worked on geometric alignment of the crossing approach roads to match the aerial imagery. Although almost none of these would be cross-checked against GPS traces, Bing imagery is almost always a factor of 10 more precise than the worst of the TIGER data. The resulting edits may have an effect on “TIGER desert analysis” - the study of large untouched areas in the US. Those “TIGER deserts” still exist but would be smaller. My personal contributions heat map now mostly shows areas in the US where there were rail crossings that needed fixing: 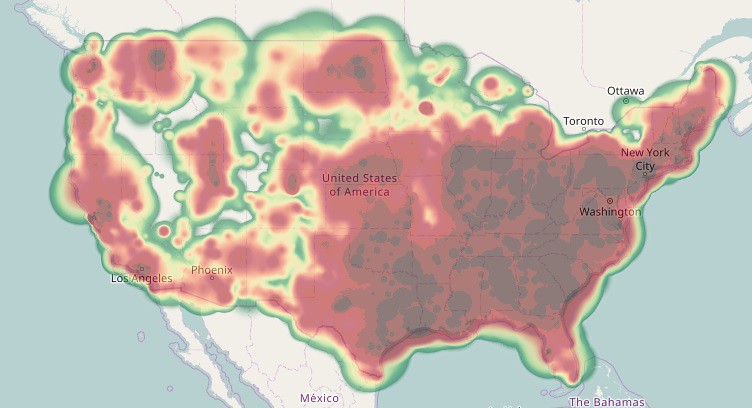 I have fond memories /nightmares of a task landing in West Virginia or Kentucky, and realizing that the only way I could fix the crossing called out by the task would be to untangle the surrounding 30 miles of rail and roads.

The challenges took a total of 10 months to complete. I attempted to keep the quality of tasks relevant by re-running the analysis every week. Thus any fixes completed outside of MapRoulette or edits of surrounding crossings would automatically be marked complete in MapRoulette.

In the role of the “Monday Morning Quarterback”, (with perfect hindsight) there are things that ideally would be done differently or included in a more detailed task definition page:

As a side note about the internal detail of MapRoulette, it seemed as though the Postgres SQL RANDOM statement was not truly random - as though there was an internal optimization or spatial caching of a previous RANDOM statement. My only evidence of this was that when encountering a 2-track crossing on a task where both level crossing nodes were corrected for the first task, the second crossing task would appear after only a small number of other tasks.

Because OSM is constantly being edited, there are now new unmarked crossings identified. I have not extended the Rail Crossings challenge because many of them come from new construction where there is no imagery to determine whether the crossing should be a level crossing or bridge. I may add these if I can find a way to ensure that just the solvable crossings are identified.

The end result of these challenges is that the Rail-Road network intersections in the US are much more accurate. They could serve as a reference to routing apps that can generate an alert for level crossings. This application has one case that doesn’t fit easily in the OSM tagging convention: busy tram crossings in cities, where there may be many crossing alerts generated over a short distance. Although they are actual rail crossings that would result in serious damage in an accident, continuous alerts are a case of ‘crying wolf’. This was briefly discussed in railway=level_crossing with in-street trams? , but without any definite resolution. For now, the application developer also needs to examine the crossing rail type to screen out tram crossings - probably not an ideal solution.

So amazing, congratulations to everyone for undertaking such a huge mapping lift!

I came across quite a number of crossings where the offset wasn’t touched at all. So I’ve got the suspicion, that some people (not you Mike) worked mechanically on this task.

Yes, I saw some of those also. That’s where the tutorial would have helped - ensuring that they zoom in far enough to see that the alignment needs work also.