Posted by InfosReseaux on 26 November 2018 in English (English). 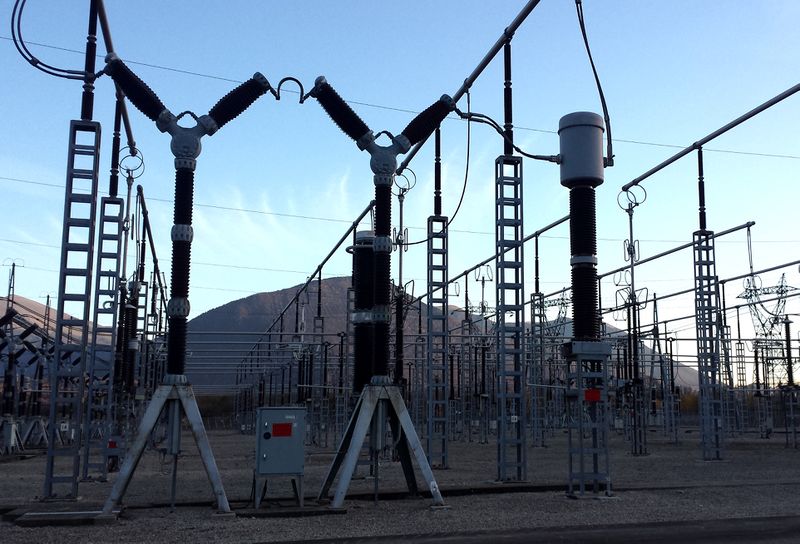 Infrastructure cartography is the main topic I’m involved in in OpenStreetMap and certainly one of many good reasons of why such a free project is valuable nowadays. It’s really useful to get such data as a professional, to work for many network rollout or operation company. It’s also important as a citizen, to get a better understanding of how a city or our own district actually breathe or get fed by its different man made supplies. Everyone is able to more and more use OSM to get many other data than the road network which was the main initial proposal of the whole project.

I’ve been contributing to OSM for seven years now, both on the field to edit the map in the places I went and for the tagging model also. The last is literally the key to empower people to collect relevant information from any sources. I feel the need to sum up here rich discussions, interesting collaborations and the challenge the community achieve right now.

How OSM helps in infrastructure knowledge?

Mankind began really early to roll out primitive infrastructure as to make trading between civilizations or later cities and countries. Roads are the first network which was built. Industrial revolutions and technology allow us to transmit not only goods but power, telecom signals or any utilities on furthest distances than ever. Cartography helps a lot to not only specify how we want to roll out any new network but to make things smarter and take the best advantage of existing infrastructure. Due to economic or competition pressure, specialised and industrial operators didn’t get the habit to share their knowledge or build common inventory of their assets. Public administrations spend high amount of power and money to manage underground and urban spaces documentation as to ensure the reliability and sustainability of our deeply industry dependent societies. Nevertheless, anyone don’t have any guarantee that proprietary data quality is maintained at an appropriate level and collaboration may help anyone to achieve such goals.

OpenStreetMap comes as the first opportunity to document the physical infrastructure at world scale with a unified tagging model. Its role can go far beyond the information of humans only and can be searched by machines too with a sufficiently documented tagging model. This is what I find interesting in OSM approach and the several tagging proposals I get involved in were intended with this idea in mind.

Required consensus may be hard to get on technical topics like power networks mapping. Discussions may be tough but remains a valid way to get things adopted at a large scale.

How infrastructure knowledge can helps OSM to get better?

Getting involved in tagging improvement shows a different face of OSM project. Infrastructure and networks cover several fields of knowledge. Finding a common way to document them all sounds like a very challenging idea. This is an occasion to use existing tags and create new ones to bring that all more consistent and versatile. It won’t be possible (or less possible, with extra effort) to merge official data if we keep our very own way of thinking instead of mapping factual and objective information. Even if today we’re only able to get data from aerial imagery, tomorrow it won’t. Our tagging model shouldn’t be designed of what we can do today but should take care of what will be possible tomorrow. We (including me sometimes) confuse too much the relevancy of tags and the availability of data.

Infrastructure mapping makes us writing proposals and finding solutions to document complex and interconnected systems. They are often based upon worldscale shared norms which ease data exchange between OSM and outside repositories. Official data enable us to get missing or hard to obtain information and may speed up the move to more objective tagging. Currently more than 20 proposals regarding infrastructure has been voted, a few of them rejected and a few more are coming. This is a long journey including the introduction of man_made=street_cabinet, power=plant, waterway=pressurised and several power transformers/switches extra attributes.

Keys like location=, waterway= or building=* were well established and reliable to build on them. Power networks mapping has started merely around 2008. 10 years later, while we are using what looks like a “2nd generation” tagging, some figures can be taken out the history of Martin Raifer tool: 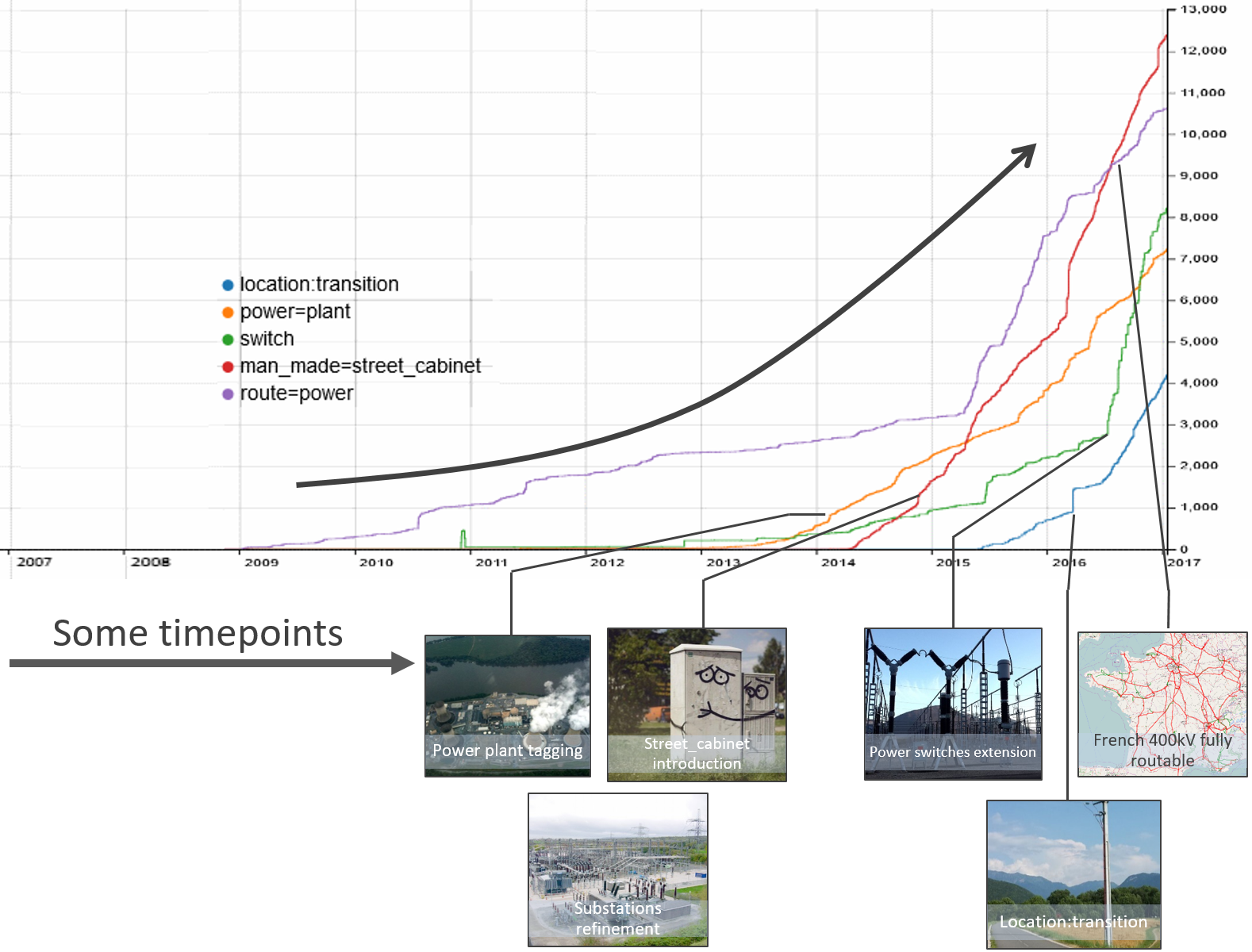 While proposals have progressively introduced the tags we use now, some keys have to be replaced or removed from the database as to ensure some consistency in the records. In 5 years, power=station and power=sub_station (respectively abandoned in favour of power=plant and power=substation in 2013) go from 150 000 items to under 30 000. A bit slow comparing replacement of 300k landuse=farm in 2 months but it’s impossible to automatically retag and each item should be checked carefully.

Documentation and quality tools improvements encourage users to contribute, even on technical topics. Mappers may be interested to describe more precisely their surroundings or get more descriptive data in their professional activity. OSM remains the platform to gather it all.

There is still a lot of things to do as to get a comprehensive map of infrastructure around the globe, especially in developing countries and strong growth areas. Occidental regions may reach a step shortly thanks to many contributors’ implication and operators’ data opening. Here comes the maintenance challenge and dataset cycle of life management which is a different kind of mapping activity.

Tagging we produce can nevertheless be used in many systems. Even outside of OSM. It can be really useful for further building and rollout planning with adapted software that still need to be developed. Feel free to get involved and propose any missing features :)

Infrastructure and and the strong “verifable on the ground” mentality some people have really collide. Have you had any instances where where people were against mapping underground infrastructure or even removed it, due to difficult verifiability? Personally I am not a strong believer of the “verifable on the ground” principle, due to the exact reason that we can get valueable knowledge by few experts this way, but many are.

Your tagging proposals have influenced my mapping work. I try to map minor power lines and street cabinets now. A few weeks someone wrote the following remark “I’m editing the street cabinet (telecom ones) in Belgium and that’s funny how I can detect the places where escada went for survey ahah”

This can only mean that my changes do not blend in with the rest of the map and that “PR”-articles like this one are needed, so more people start mapping infrastructure.

utack, we can find actually some signs on the surface on top of underground infrastructures. This can be a sort of ground verifiability. Like you I think that opendata can be an alternative of ground verifiability. Anyway, OSM tagging modal can describe things even if they are not always visible on the ground as to provide sustainable and consistent model.

Thanks escada for kind comment, there is still a lot of work to do :)

You’ll probably be interested in this slippy map by Russ: https://openinframap.org/.

Sure it’s a great render to see what OSM knows about infrastructure worldwide :)

Maybe this one is an interesting power grid map you don’t know till now: