Posted by InfosReseaux on 19 April 2020 in English (English). 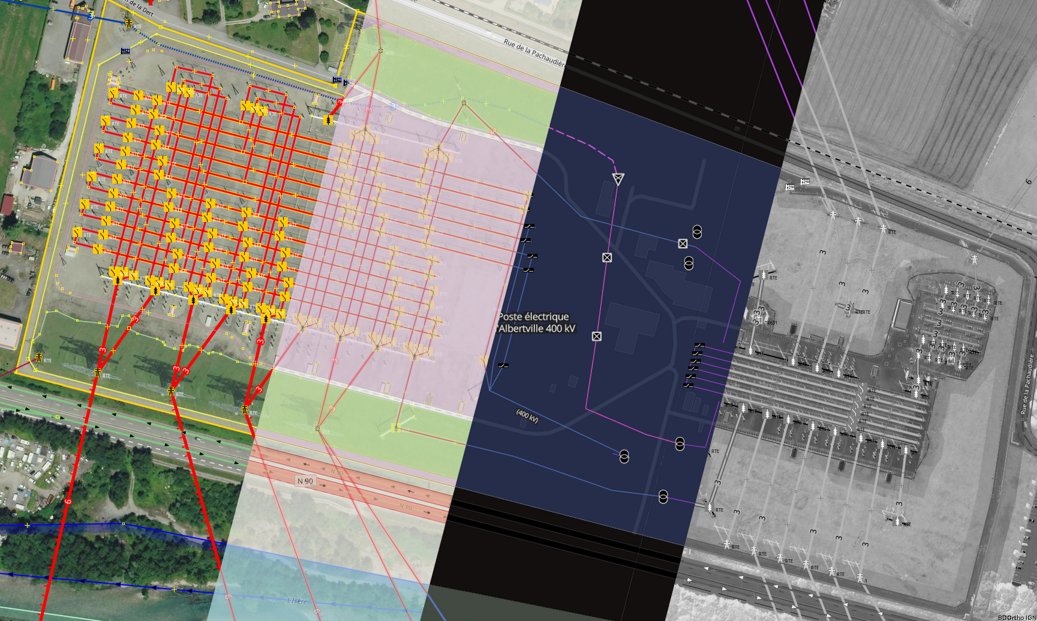 Following a published article months ago, French OpenStreetMap community reached a step in the beginning of 2020 regarding cartography of highest voltage levels, 400kV and 225kV, power networks.

Contributors had been busy, providing valuable and detailed data for years since 2008 in many places in France. This now enables to assemble this knowledge to provide an elaborated digital twin of French power transmission network including routing capacities to get paths followed by electricity over networks. It is hard to reflect years along people engagement in a single article, but all of this has been a singular human collaboration for which we should be thankful.

OpenStreetMap has been continuously updating its tagging model to describe multiple objects on the ground including power networks. Propose and describe useful tagging to follow mapping contribution has been done since the beginning back in 2004. Such proposals and tagging experiments clearly enable consistent and usable mapping contribution from ground or aerial imagery just like in any other OSM knowledge domain.

Power networks data allows to improve operational efficiency (power routing just like road routing, consolidate ground surveys…) and can improve reliability of planning and development studies by combining environmental and surrounding data on the same platform. Climatic sensibility of overhead lines can be evaluated more quickly with help of landuse data in OpenStreetMap for instance. Some 3D-renders like F4-map also use existing power lines to display them in landscape.

Power networks are composed of lines and sites to allow electricity to flows between production and consumption places. Most of their components are visible on ground and are worth be added in OpenStreetMap. Contributors has not only described overhead lines but substations as well with many equipment to switch or transform electricity.

Instead of a simple drawing of lines converging to simple nodes representing substations, we wish to describe what is inside facilities like upside in La Vaupaliere near Rouen. Thus it’s more than 389 km of busbars operating at 400 kV or 225 kV which has been drawn since 2013 and 194 km of portals to anchor incoming lines.

Contributions has been made first of all from Bing imagery, local orthophotography and more recently with French Geography Institute’s BD Ortho imagery. The last has been made possible trough a recent agreement signed between Institute and OSM France and was undoubtedly useful to complete power networks mapping.

Furthermore, open data has been published in 2017 by French network operator RTE including overhead lines, underground cables and supporting towers. It has been provided on the national transmission networks platform gathering participation of 8 industrial private actors. Those data allowed to know since 2017 where the finish line was and get a more accurate description of underground parts of the network. 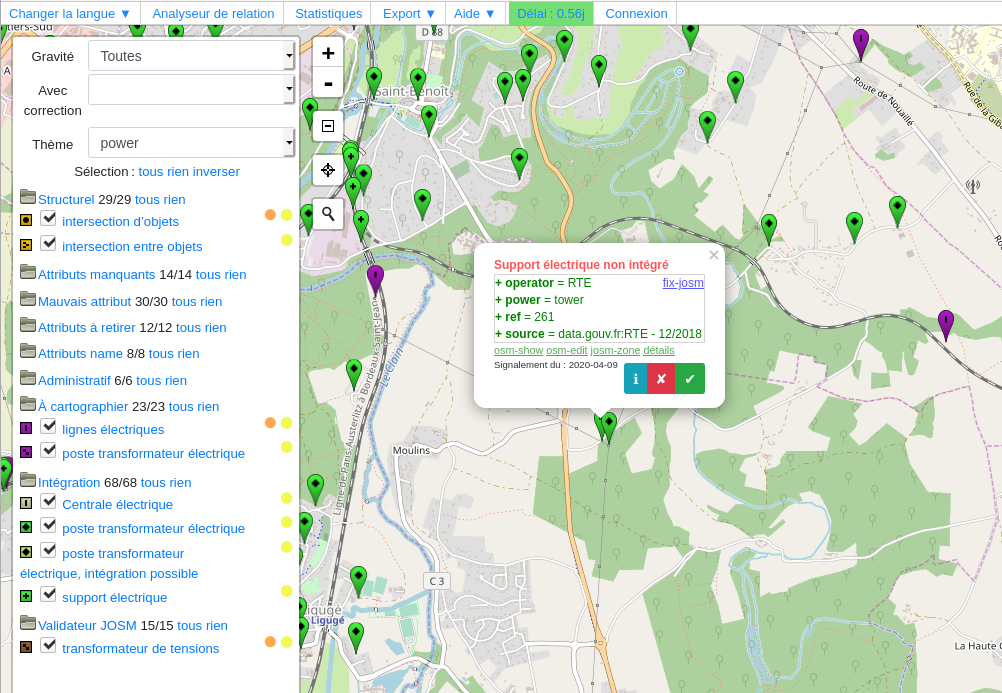 Official data were added to quality control tools like Osmose to guide contributors. Lacking features areas were shown like many other domains in OSM. A dozen of different analysis show topology problems, missing integrations and tagging mistakes.

Topological capabilities of OSM databases allowed to simplify some official data provided by network operators when it was relevant to do so. When several underground cables were buried in the same time, a single OSM line with appropriate attributes can be as useful as many.

Same information are available in the two approaches. Limit amount of geometries in OSM allows to reduce risks of collision with surface features in further editions.

230 km of vectors were simplifies this way until now and this is still counting.

Knowledge of overhead lines and underground cables isn’t enough to get paths followed by power. Some lines may carry several independent circuits. Circuits are power systems (composed of 3 conductors in most alternative networks) linking 2 or more network substations. Picture below shows lines carrying 2 circuits each while their own OSM geometry consists in a single line. 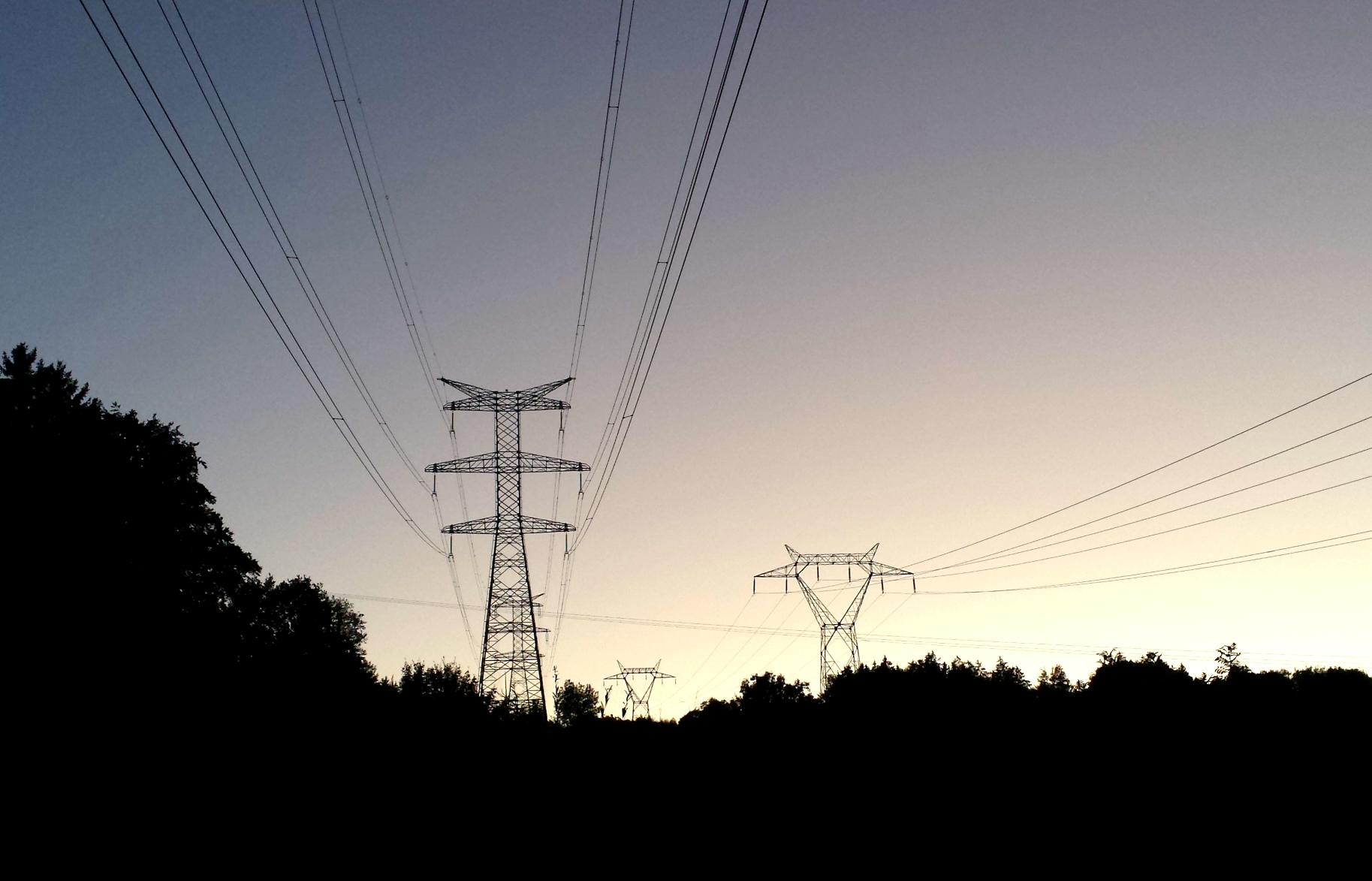 Starting 2015, logical relations where established and involved substations and linking power lines sections between them. Each relation represents a single power path in the network just like it’s done in public transportation with underground or buses lines.

Currently, more than 1 500 relations are available in France. This materialize an original digital twin of 400 kV or 225 kV transmission networks on which it is possible to simulate power flows or incidents impact with help of technical data, algorithms and dynamic data available in other communities. 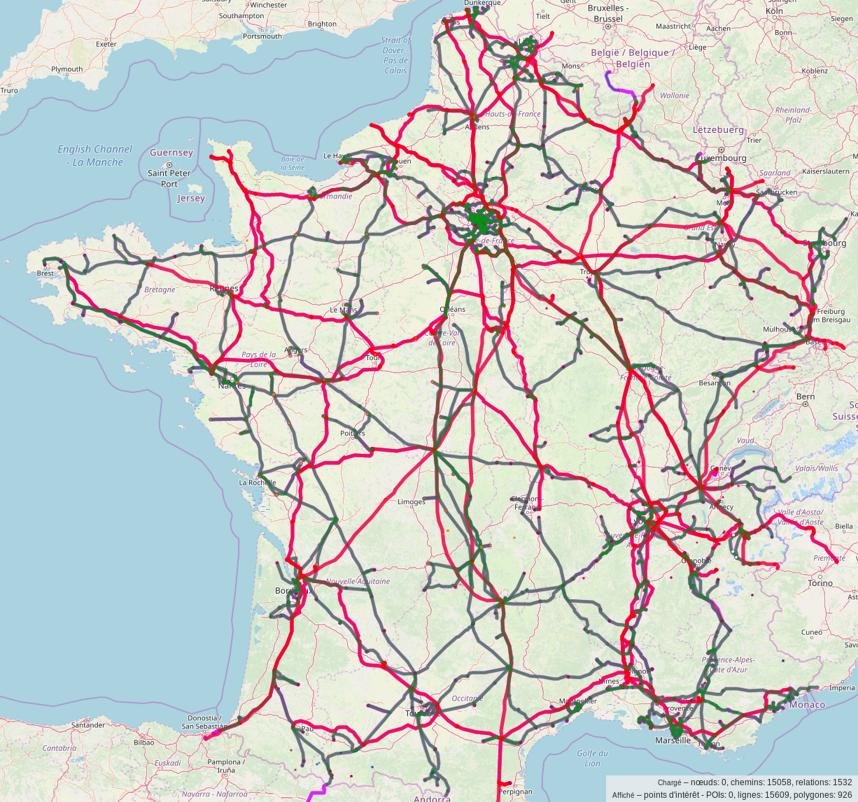 Describe technical equipments inside outdoor industrial sites like many power substations is a unique occasion to add usual OSM features as well.

Starting 2008 until now, following features has been collected (situation in April 2020)

Some example of remarkably green substations like Creney and Vaupaliere are particularly representative of this achievement.

Vegetation mapping inside substations is important in regard of some environmental-friendly projects to reduce use of chemicals on which operators communicate sometimes. OpenStreetMap now provides a green landuse classification inside substations including grass areas, forests and scrubs with the established tagging everyone uses outside. 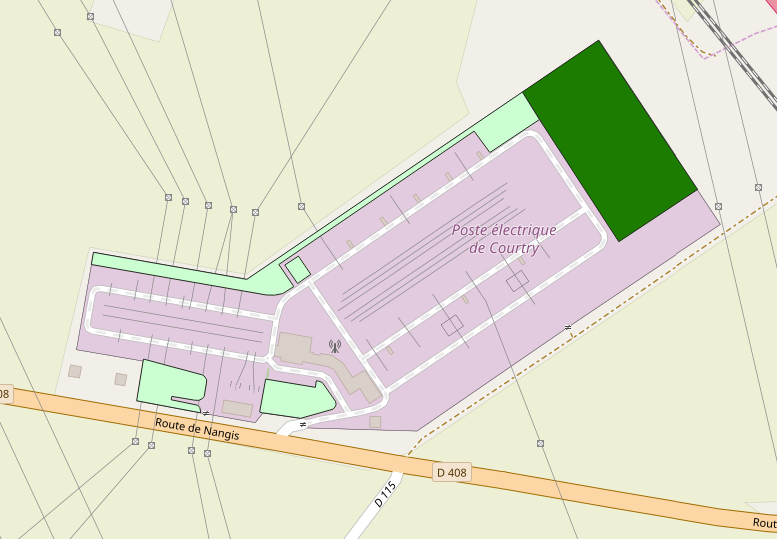 Complete surface of 400 kV and 225 kV substations raises at 2 571 hectares in metropolitan France. We found out that 16% of this surface is covered with grass, which means 422.3 hectares were outlined by hand, year after year since 2008.

Produced data were already extracted and published on the French national open data platform Data.gouv. Several datasets describe network components which can be used in an external GIS with all due respect to ODbL licence terms. They extend existing official datasets provided by network operators back in 2017. You’ll find among them:

Even if provided content is already significant, OSM still improve its tagging model and proposals will continue to be written. Additional official data would allow community to produce even more rich datasets with more and more features. Regarding static characteristics of networks, we think those information could be helpful:

Several years has been spent across country to discover those infrastructures, took thousand of pictures and make surveys on my spare time. This is not a professional activity. Gathering such information on a single platform will certainly be useful to a better understanding of how these networks run. Topic about risks prevention and crisis management can now be explored. Anyway it is now possible to compare technical data and surrounding environmental features which is barely possible elsewhere.

Finally, French contributors will be able to continue to contribute on lowest voltage levels in transmission and distribution networks. Digital twins of <100 kV networks remain to be built and this will be a as tremendous as those networks span everywhere. Feel free to join us in your own location.

This is the kind of diary entries I like to read.

Interesting work the French community did on the power network. A major achievement after so many years.