Posted by ElliottPlack on 2 July 2020 in English (English).

Baltimore City, like many cities of its era, was built long before environmental regulations required the preservation of wetlands and streams. Baltimore is built along the banks of a navigable waterway, in a valley that drains a large watershed that extends into the surrounding environs. However, when examining a map of the city, there is a notable lack of streams in the built up areas that usually give some definition to the topography shown on a map. That’s because the streams that used to dot the banks of the Patapsco River and Jones Falls have been placed underground by man in an attempt to tame nature and move surface water out of sight. Public Works engineers of the early 1900s tried to put streams into pipes wherever possible because they were seen as open sewers, rife with disease and industrial filth. These decisions have had dire consequences on the health of the water bodies downstream and have turned the built up city into an area devoid of natural water where there should be plenty.

Recently I’ve started finding and adding these buried streams to OpenStreetMap in an attempt to surface their existence to the world. Referencing public storm drain plans and old news articles I’ve found at the library, I’ve started adding some streams that are now completely underground. The process is interesting in part due to the massive scale of the underground pipes and tunnels that we rely on any time it rains, yet have little knowledge of their existence. There are several tunnels in excess of 4 meters in diameter. 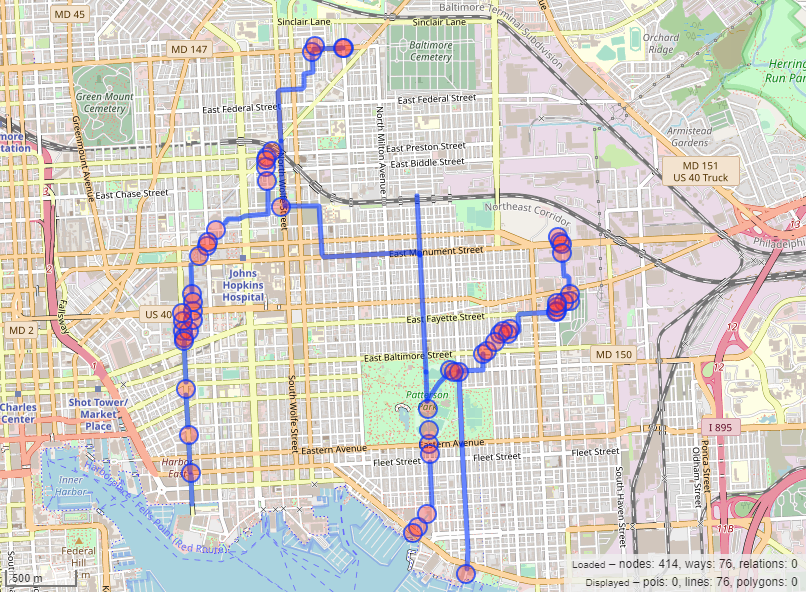 While you can see the culverts on the regular map, they are usually below the streets and thus not visible. I set up an overpass query to select all these culverts for viewing. I find it interesting to see how far these systems extend underground and how large some of the individual pipes and culverts are. I also enjoyed figuring out the names of these streams looking at the old plans and articles and then assigning those names on the map. Some of the streams that have been completely buried, like Sumwalt Run in Charles Village or Ogier’s Run in Highlandtown, have been completely erased from modern maps. By adding them to OSM, I hope to reintroduce them to the world.

Do the drains just flow into the harbor or are they diverted into wastewater treatment facilities?

This nice work reminds me of the somewhat and often buried burn, means stream in the Scots language, that flows through my home town of Aberdeen in Scotland.

It too flows underground in places where local people would be surprised to find it.

I intend to bring it back to local awareness at some point by mapping these hidden sections. I know more or less where it runs, from previous mapping, but have not yet had time to tag it and mark up all the hidden sections.

It too often flows through large culverts.

You can see where it dissapears under the city before it enters the harbour, with this overpass turbo query.

This is great work and incredibly interesting. A few years ago I was having Lunch at a restaurant on Fleet called Tyson’s (not sure what it is now) just a few doors down from Kisling’s. I got talking with the bartender/owner and he mentioned this tunnel that was under his place. Well we went down and he showed it off. There was a rickety wooden door/gate and a tunnel probably 4 feet wide by 5 feet tall. There were cement steps down into the tunnel. I was too chicken to go more than three feet in. He mentioned that it become flooded with water a few yards in and that the tunnel supposed goes all the way to Patterson Park. I took a few pics of the entrance and then went back to lunch. I still think about it every now and then and always was curious as to the history.

Needless to say, looking at your map it looks like it may be connected with your underground stream research. Are you familiar with the Tyson’s tunnel? Do you think it is part of this stream system?

I put my own diary entry up about my mapping Aberdeen’s under ground streams and https://www.openstreetmap.org/user/GinaroZ may be saw that and made additions, with some very nice work. I think he used an available map I had’nt thought to use, for over tracing, I think an old OS map. I will try to remember that is available for next time.

I have significantly improved the Overpass query https://overpass-turbo.eu/s/VXi

@Glassman, these all go direct into the Harbor. There was no stormwater management regulations when all of this stuff went in.

How can I enter similar subterranean data on Open Street Map?