Posted by scruss on 7 October 2016 in English (English)

Dropping off a letter in the mailbox at the end of the street, I noticed this sticker was attached: 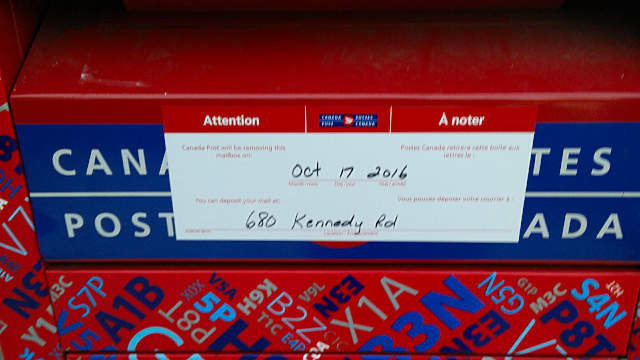 I looked around on the map for more amenity=post_box nodes around me, and found coverage was patchy. Local mapper andrewpmk has done some sterling work adding mailboxes, but there are some neighbourhoods even he can’t find time to go into. But there has to be a definitive list of mailbox locations in Canada, somewhere, right?

Wrong: Canada Post does not publish mailbox locations. There’s no way of finding a list or map on their website, and Canada Post confirmed to me that “we do not have a map for street letter boxes”. So it looks like we’re the only people mapping them, unless there’s a list I can get via an Access to Information (Freedom of Information) request.

2017-01-04: Update: disappointingly but unsurprisingly, they refused.

Same for Polish Post, it seems they don’t know themselves where their postboxes are :)

If they don’t know where they are .. how can they be sure they are being cleared?

They may not have a map.. but they will have a list … probably by street address. Might be possible to have that released - copyright free?

We have had along saga about this in the UK, and we are just now beginning to lose post boxes.

Edward Betts obtained a list of post boxes from the Royal Mail back when it was a government body and subject to FOI requests. Then Matthew Somerville of OpenSociety (dracos) built a tool comparing that data to OSM. More recently Robert Whittaker created Post hoc for tracking the mapping of post boxes.

Good to know. Canada Post is still a government body (a “Crown Corporation”). They haven’t been very good about open data, entering a lawsuit against geocoder.ca (now settled on unknown terms).

I think I’ll try the “polite request” approach first before going for a full-on FOI request (if we even have the ability to FOI in Canada). Most Canadian Crown Corps are bound by cost-recovery requirements, so this might cost me.

Cost? Put it to them that they and their customers will have access to a free map of their post boxes if they provide the data (free). If they were to provide the same service it would cost them.

Are the post offices mapped? Then they could use OSM instead of Google … and have their post boxes on it too.

That might be the sensible thing to do, but they do have a cost recovery mandate, so anything that incurs costs will likely need an internal business plan.

Had a call from the Manager, Access to Information and Privacy at Canada Post this morning. It seems that most rural mailboxes are documented as human-friendly addresses, and not geocoded. I’ve agreed that my request should be limited to:

Please provide all current geographic locations in the region of GTA for public (outgoing) mailboxes. Canada Post does not provide this information on its website. Please use a suitable computer-readable format, as I intend to add these locations to OpenStreetMap.

… and I finally hear their decision: they refused.

The gist of it is that they feel that disclosing mailbox locations would:

I’m frankly O_o about these reasons. I mean: mailboxes are bright red things left out in the street in highly visible locations so that you can find them to use Canada Post’s delivery service. How could they be confidential? Not even the Underpants Gnomes could come up a business plan to drive Canada Post out of business by mailing things. Sheesh.

I can appeal, and I will. I suspect the real reason is that Canada Post just doesn’t want to go to the bother of opening data.

… and wouldn’t you know: after lots of pressure from the Office of the Information Commissioner, Canada Post caved and sent me the information!

Now, it’s not particularly useful as they don’t hold geodata. It’s also printed: so yay, 80 pages of OCR. But getting anything out of Canada Post is apparently very difficult. I hugely appreciate the efforts of the investigator at the OIC who kept pushing this request through.