How does the OpenStreetMap community perceive gender equity?

In #Geochicas -women from OpenStreetMap in Latin America-, we want to contribute to the debate on discriminations and gender inequality in the community with concrete data, and also with testimonies. For this purpose, we have built a survey disseminated in the community during most of the year 2017, in 7 languages.

While we update the results, I share here the preliminary results, which illustrate the community’s experience of discrimination and harassment between genders. The survey has been disseminated on all OpenStreetMap channels and on social networks, repeatedly during 2017.

In conclusion, the men who have participated in the survey perceive in the same way or more pronounced the lack of presence and participation of women, and the negative impact that this has on the ability of the data and the map to represent the needs of the whole society and its diversity. 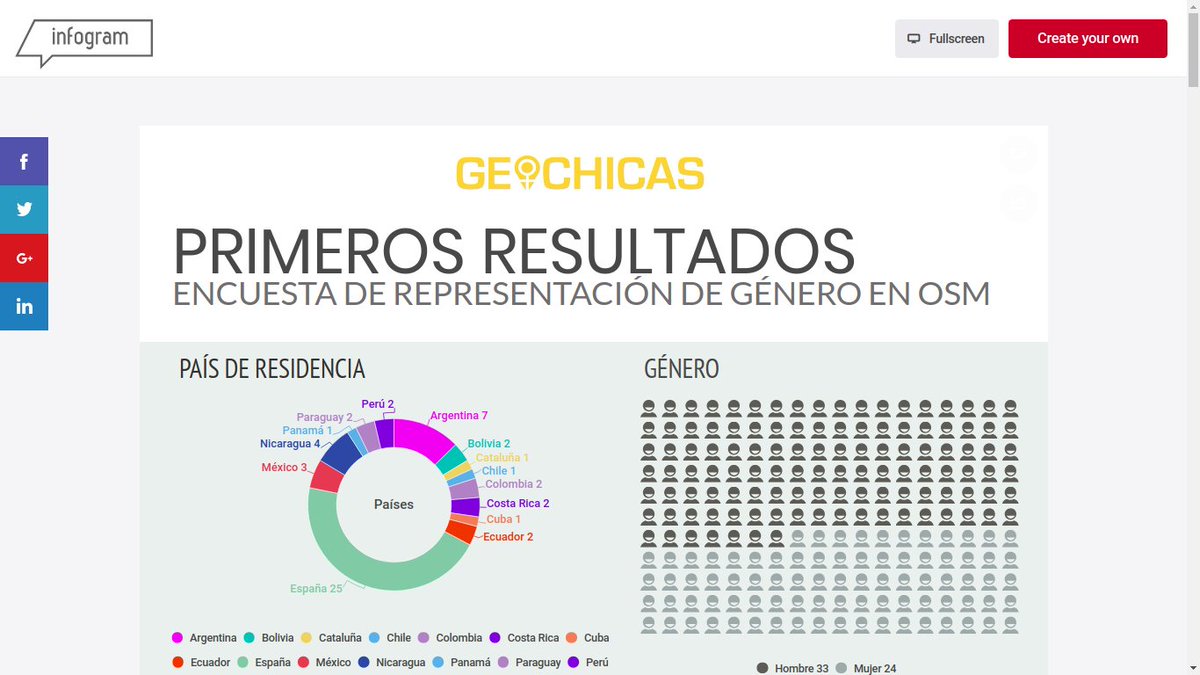 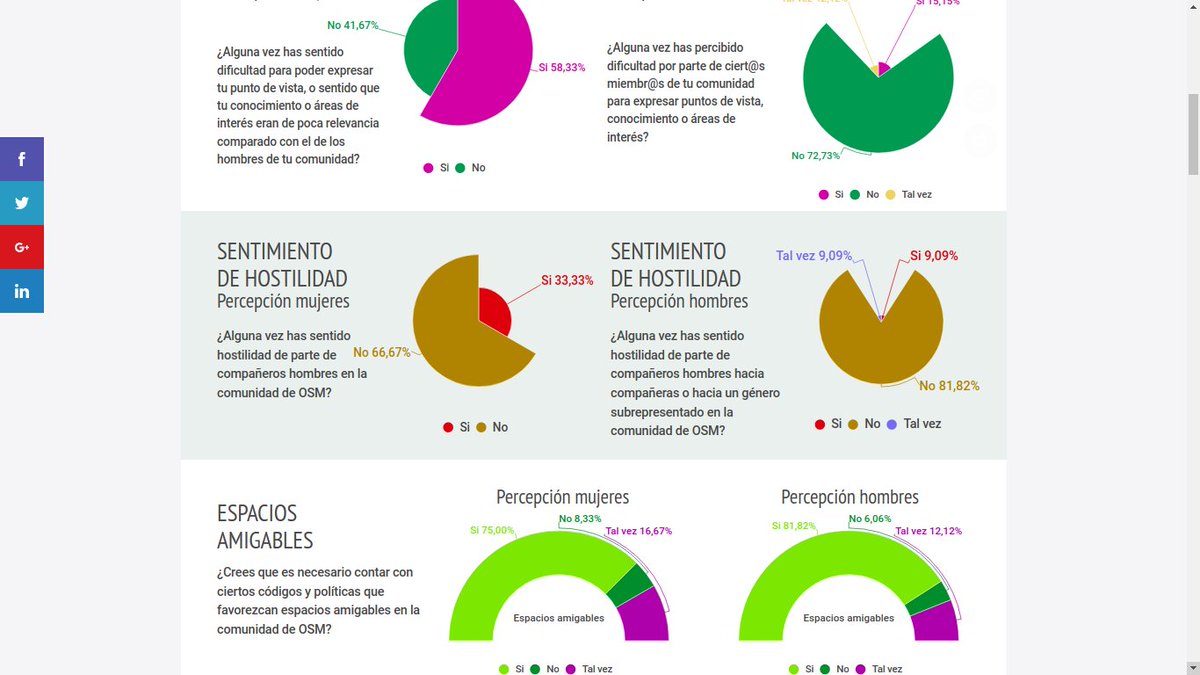 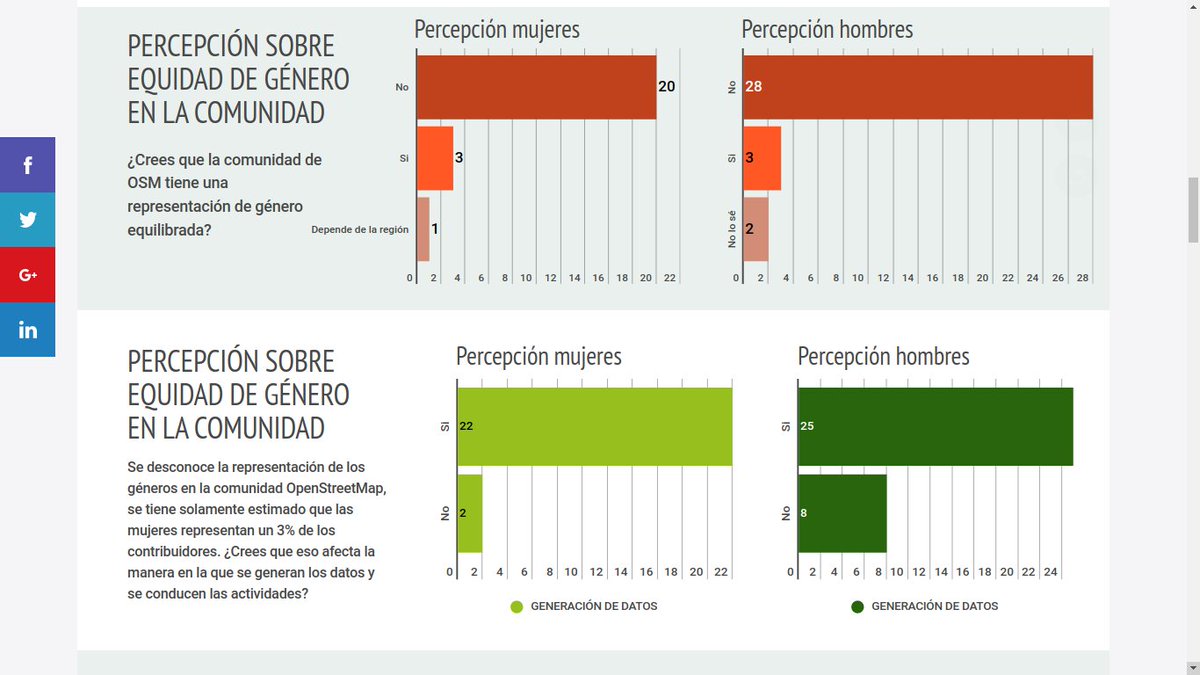 The sampling of the universe population, possibly does not represent faithfully the perception of the whole community. The consideration very commonly expressed by men in forums/lists and OpenStreetMap chats, that the gender inequality in the community is not a problem, let us think that they would not have considered it of interest to answer this survey.

Let’s wait for the final results soon at Geochicas.org

The construction of this survey, its translation into different languages to permeate the largest number of local communities, and the analysis and representation of results has been collaborative and has gathered the support of many people, who we thank warmly.

All women who wish to join the conversations and discussions about gender, can join the Telegram channel of GeochicasOSM, and also all the people are invited and invited to follow us on Twitter @GeochicasOSM.

The updated synthetic results can be viewed in English there: https://infogram.com/gender-survey-results-geochicas-1h8n6me10q192xo.

The survey also contains free comments and qualitative answers that can be synthetized this way:

My personal understanding of these results and my experience:

Final reflection on the role of “separatist” spaces:

Thank you to the GeoChicas for your leadership and making this a data-driven discussion.

By combining experiences and data, we can move towards productive next steps.

You have correctly pointed out that those who participated in your survey are not representative for the OSM community but i am somewhat astonished about your comment regarding the nature of the selectivity. Could you point us to some examples where people have voiced in forums/lists the opinion that “gender inequality in the community is not a problem”? I understand this kind of depends on your definition of “gender inequality” and “problem” but my impression is that it is at least very rare that people think it would not be good if there were more women among mappers than there are at the moment. I do not remember any case where on forums or mailing lists such an opinion was voiced, especially no case where this was not quickly met with strong disagreement.

A more methodological comment - like often with surveys you probably have the problem of separating indirect influences from what you actually want to find out (i.e. the differences between men and women how they experience certain things). It is for example not unlikely that the women and men who participated in your survey are on average of different age, different socio-economic background or have a different level of experience with OSM. If such differences are large they could significantly affect the results in ways that are unrelated to what you actually want to determine (the differences between men and women). Have you included questions in your survey that allow assessment of such indirect influences?

In case of the hostility related questions i am missing the symmetric counterparts of the questions you listed results for. In particular the percentage of men who have felt hostility from other men in their community. That would provide important reference points to the numbers you give.

The apparent higher ‘sensitivity’ of men to the unbalanced gender representation is an interesting observation but could be due to the indirect influences i mentioned above.

@mapeadora thank you and the entire GeoChicas team for work you are doing. This is an important subject. Getting survey data from the community helps us better understand the issues.

When you are ready to publish our final results can you produce the infographic in english? I can understand some of the references, but I’m afraid that I’m missing important detail.

Hi everybody Yes Glassman, we’ll present final results in English in the global SOTM and publish new infography in English, very soon. We’ll present it here in the diaries and in Geochicas networks.

It is not clear that inequality is not a problem, but (1) that unequal gender representation does not directly impact the quality of the database, and that (2) it does not require necessarily action from the community because we should respect the lack of interest (sometimes considered natural, sic) of women in the themes of data, cartography, and science in general. This is a trend of commentary seen very frequently in the various communication channels.

Although we have many Geochicas, sociological, geographical, anthropological interest very pronounced because of our experience and careers, we had to limit the survey to a minimum in order to ensure the response rate, which is always very difficult for autonomous surveys, as you probably know. The objective is not to analyze the underlying reasons for opinions and feeling of hostility or discrimination, but to know the experience in a relative way (genres between them), so we prefer to concentrate the investigation on the experience and keep it short. This inquiry responds to a necessity and a real observation, and not to a curiosity. There are large and many testimonials of women about their experience of hostility in the community (in general in data and technology communities), so the purpose of the survey was not to compare their experience of hostility with the experience of hostility by men, as if we sought to verify comparatively the legitimacy of this feeling, but to know it in more detail, this lived experience of women and groups under-represented. There are differentiated questions for men to know their view of hostility toward under-represented gender groups in general.

I hope I answered clearly -my English is approximative.

Thanks for the reply to my comments. My main point about the methodology was that i for example have difficulties interpreting the 33% of women have felt hostility from men in their community. Quantitative observations like this require context to be quantitatively meaningful. Without context i can only see that there is a significant fraction of women who have participated in the survey who have experienced hostility. And frankly this is something i would expect since occurrence of hostility in social interaction is in my experience something universal and the question was for any occurrence of any kind of hostility. If i assume most of the women in the survey have been in the OSM community for at least a few years (which i am not sure i can) i would in fact expect the number to be higher. Frequent interaction with a large community with a larger number of people for a year or longer without any incident of hostility seems - as desirable as it might be - unusual to me. And in the other numbers i can see there is a significant difference between self-perception of hostility towards oneself and perception of hostility towards others which is - when considered purely qualitatively - also an expected observation, even without any gender difference.

Regarding the impression that many consider gender inequality in the community to be no problem - without examples it is difficult to specifically analyze that. My own impression when talking to people (obviously mostly men) in the community is that many consider it highly desirable for there to be more women mappers, developers etc. and listen very carefully and with interest and compassion whenever they hear from women in the community about their experiences. Both lack of awareness and indifference towards the existence of gender inbalance and gender discrimination are things i see rarely in OSM, especially if i compare it to other diversity subjects (in particular social, cultural, language and geographic diversity). If and what kind of active measures are advisable to address this is a whole different story of course. Here you have in OSM a widespread view (which is also in the OSMF mission) that growth of the community of any kind should be organic and it is not a good idea to actively bootstrap community where none exists yet. This is a widespread view among people in the OSM community but this is not the same as being unaware of or indifferent towards gender inbalance.

I think this is probably also a subject where there are significant fundamental communication problems (it is difficult to articulate opinions on a highly perception dependent topic like this, especially when you do so in a non-native language) and it is easy to misinterpret statements and reactions in a way that is different from how they are meant.

Hi, it’s been a while, but I share the results in English https://infogram.com/gender-survey-results-geochicas-1h8n6me10q192xo. Qualitative responses should be organized, translated, and published in a separate publication. We plan to do so in the next few months.

Providing other elements of response if it still works. The survey has had a statistically low response rate since it is difficult to control in digital media, and that the interest in it, and the time available to answer it, may be limited. The objective of this survey is to be a permanent means of consultation (although it certainly can and should have improvements along the way). For this reason, we communicate the results being transparent about the number of respondents and the quantitative validity that each person wants to give. Its relevance will rise over time and with more responses.

As for hostility and perception of it, it is precisely asymmetric. Men tend to be hostile and have aggressive energy without realizing it. It is common for almost everyone to want more participation by women (I have never heard a man in the community say that he did not want the participation of women), but their ways of convivence can discourage it: being aggressive, not allowing free expression, imposing their opinions, making unwelcome jokes or analogies (as in OSM’s talk-list regarding the upcoming board election). These behaviors that we can call micro-machismo have the indirect effect of distancing women from the various forums and activities of OSM.