Posted by manoharuss on 3 September 2018 in English (English).

I wanted to share how anyone can contribute to suspicious reasons in OSMCha. Recent events have only highlighted that we can tackle the problem of validation by working together and not by isolated efforts.

Wille is working on a new version of this process that would make it easier to flag features in OSMCha but I wanted to document this current way. When the new version lands in a few weeks time, I will document that process publicly too.

What do we need

At Mapbox, we use the standard geojson schema as per http://geojson.org/. This is the reason why, OSMCHA was created to expect a geojson as an input when we want to post a suspicious reason. Please see the example geojson feature below.

This can be any name that we can choose. From mapbox, we have decided that, we will have detections named similar to Mapbox: *detection type* apart from the reasons that we already have from osm-compare. When we post to OSMCha, the suspicious reason should be added into the feature properties.

Note: is_visible must be true, other wise the reason will not be visible in OSMCHA publicly

Once you login into OSMCHA, a new production token is automatically generated for your account. You can usually snoop on any API request in networks panel in your browser, to see your token under the request headers. 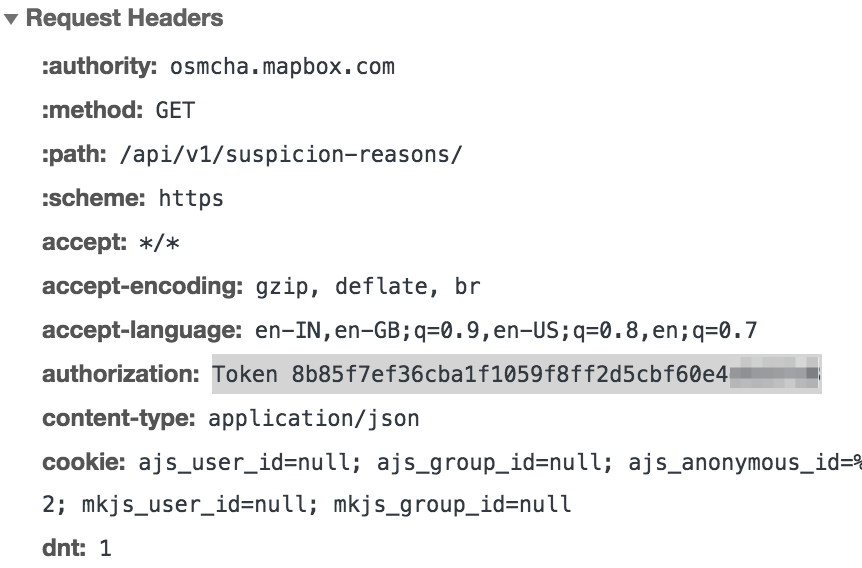 Entire selected part in the above image is used for authorization.

With these 3 resources, we can do a POST request to OSMCHA API and it should show up on OSMCHA instantly.You can use this node js snippet to post to OSMCha.

This is my changeset I tested this script on 61091946. I have greyed out my token code, but it should work as is, if you test with your own production token.

We are aware that there is currently a lot of noise in OSMCha reasons and we are hoping to clean those up soon from our end. If you are going to have a service continuously running that posts suspicious reasons, please let Wille know.

What flag (e.g. “new footway created”) will objects get if they are reported this way by third party applications?

Do you mean ‘suspicious event’. A suspicious reason seems to mean something else to me. Like somebody having an ‘agenda’ of wanting to cause harm to OSM and deliberately acting on that.

But the way I understood OSMcha is that it reports events, so the result of such actions.

@Nakaner Flag depends on the reason attached to the feature in the request. To test this, I tried using a Test flag.

During writing this diary post, I posted the request to OSMCha, you can see that there is a Test flag to my changeset https://osmcha.mapbox.com/changesets/61091946/, added to the feature I used in the snippet.

@Polyglot I think we are on the same page. Sorry for the confusing language. I have called them suspicious reasons but these are what we see in the reasons filter in OSMCha under Reasons for Flagging

Interesting and useful - but you want to revoke your token ASAP. Pixellated block of ~8 letters of the [a-f0-9] set is just as good as posting it in plaintext: http://dheera.net/projects/blur

I will do that asap. Thanks Piskvor.