Posted by krahulreddy on 31 August 2020 in English (English).

This is a GSoC project, which has been developed over the Summer of 2020 by K Rahul Reddy (krahulreddy). This project is mentored by Sarah Hoffmann (lonvia) and Marc Tobias (mtmail).

What are we doing: The problem statement

This project aims at setting up such a search suggester by comparing various alternative implementations like Elasticsearch, Solr. These suggesters set up indexing to facilitate quick suggestions to the users. The finalized stack will be integrated with the Nominatim search API. Complete installation and setup documentation along with a test suite will be created as a part of this project.

Why is it required?

What are the approaches taken?

The following steps were taken to provide suggestions:

What is the end product?

The complete instructions on how to set up the project are available at nominatim-indexing.

The hosted server contains the end product of this project. These links might not be accessible after September 2020.

As an end product, we have:

All the three above can be used to set up Nominatim suggestions anywhere! 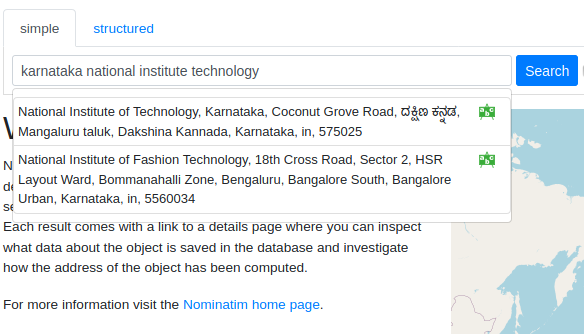 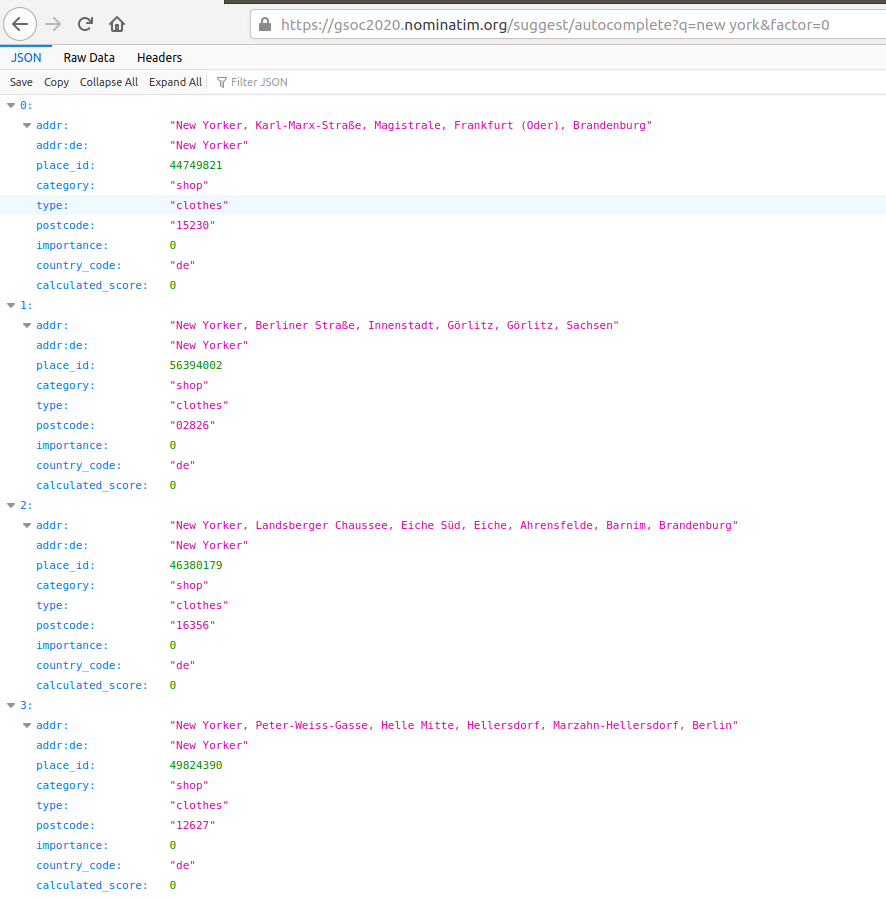 Image: autocomplete endpoint does not provide important places. This is because of the modified factor. 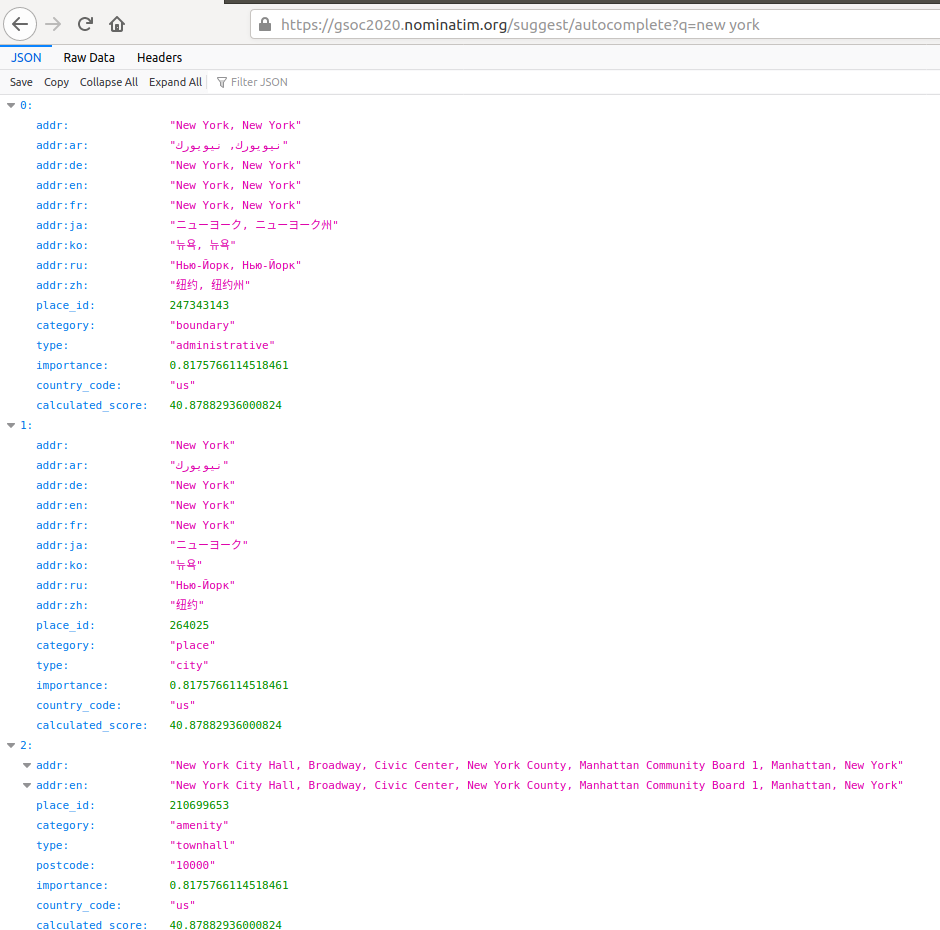 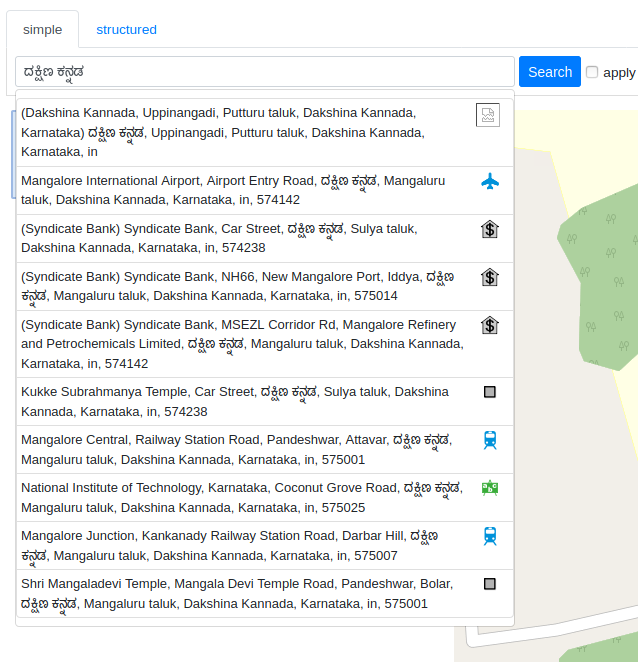 Image: Since the user typed in Kannada, and my browser default is English, addr:en has been shown in parenthesis. 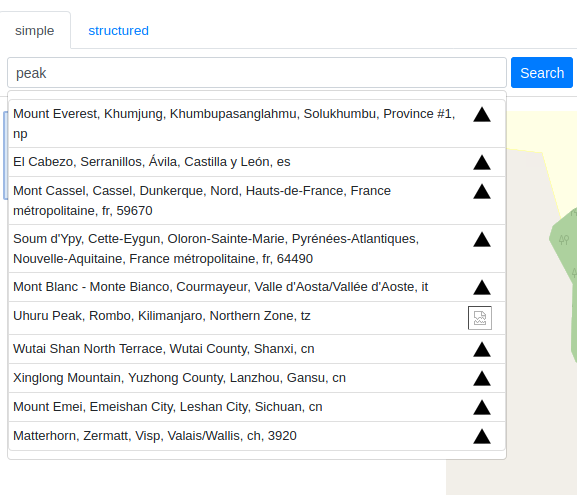 What did I learn?

As a part of this project, I was able to learn

The following area few open ends of the project which can be improved and enhanced:

Recap of the project

The prerequisite for applying for GSoC for OpenStreetMap was to have mapped with OpenStreetMap. For Nominatim projects, there was an extra Pull Request requirement. I started working and pushed the following code:

After this, I went on to select the topic for GSoC. I chose Search suggestions for osm.org, which was featured in the OpenStreetMap Ideas Page. This project was labeled Hard. I was new to Nominatim and Elasticsearch(and other alternatives). I quickly started asking questions on the Mailing list and started gathering requirements and details regarding the project.

Sarah Hoffmann and Marc Tobias helped me out in the process and I was able to come up with a good proposal!

During the community bonding period, I took up an issue in Nominatim - setup-website option. This is part of the modern PHP initiative. I hope to take this work forward by taking up more issues of this milestone after GSoC.

I was also provided a server. I set up Nominatim on this server and worked towards understanding the codebase better. I was also reading about elasticsearch and Solr during this phase. This helped us in a later stage when we had to decide on which search engine was to be finalized.

This phase was meant for finalizing the tech stack and implementing Proof of Concepts. After a thorough comparison(diary entry) of elasticsearch and Solr, we decided to go ahead with elasticsearch. The PoCs(diary entry) covered almost all the technologies to be used in the final code.

Due to other updates to the Nominatim repository, we decided to upgrade the server to Ubuntu 20.04. This was done by me as part of this phase.

At the end of this Phase, we had the server up and running with very simple prefix match suggestions. These were just based on the name of the place. Not with proper addresses, but the server was accessible and contained suggestions from elasticsearch. (diary entry)

As part of this phase, the following work was done:

More than the planned amount of work was done by the end of phase 1. I did another internship along with this GSoC project. That affected my work and communication with the mentors during Phase 2 of the project. This was covered a bit by the extra work done during phase 1. But still, without this other commitment, I could have taken up a few other tasks for this project. I still intend to work on this and improve the project beyond the scope of GSoC.

My mentors Sarah Hoffmann and Marc Tobias helped me throughout the process. Our weekly calls helped a lot in keeping the work flowing in the right direction. They made sure I was equipped with the right set of knowledge and tools to carry on with this project.

I would like to thank my mentors and OpenStreetMap for this opportunity of working on this project. I would also like to thank OpenCage for providing the server used during the project. Hosting a live server with my project made the project experience much better.

I would also like to thank National Institute of Technology Karnataka, Surathkal for letting me do this GSoC project. I was introduced to the world of Open Source and GSoC by our professor Mohit P. Tahiliani.

Nice work ! Looking forward to have it implemented on Nominatim endpoints !

Awesome. Looking forward to seeing this being implemented =)