Mapbox has a document for using a gaming mouse to increase mapping. I build a custom keyboard and assigned JOSM’s shortcut keys, because unfortunately, I couldn’t find easy to use multi-featured trackball.

I built a keyboard is custom keyboard kit called “Dozen0” with 12 keys. 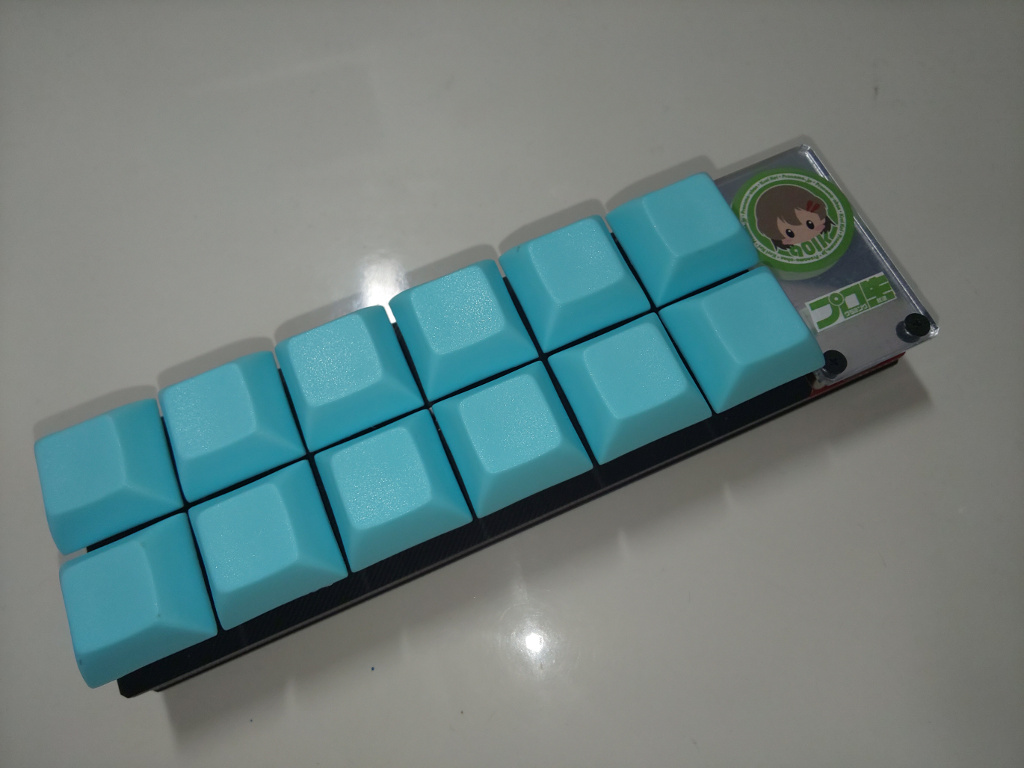 The shortcuts assigned to the 12 keys are follow image.

Key assign are optimized for buildings trace because many of my mappings are buildings trace. Can expect an increase in mapping by operating the trackball with my right hand and using Dozen0 with my left hand.

Even with a normal keyboard, it’s possible to improve mapping, handling the shortcut keys with a hand that is not using a mouse, but it will be more easier to mapping by narrowing the keyboard.

Some custom keyboards allow you to change the key assigns, some require assembly from electronic components. Look for a gaming mouse or custom keyboard you can also get it ;-)

Changesets has reached 10,000 with 10 years after join to OSM

First of all, the editing style is different for each mapper, and each mapper has a different impression from the indicators of “10 years” and “10,000CS”. I see my it as a milestone number, not as a “great editorial background”. I would like to look back my experience.

I’m a Japanese Mapper and met OSM in local Linux users group meeting. There were a lot of people in this group who had an impact on OSM in Japan, It’s very luckily. They have continued to have a positive impact on me and the Japanese community.

I belong to several teams and organizations.

And I had ran an Advent calendar event several times in Japan that mappers post the OSM-related blog.

The early times, I was tracing highways from GPS logger tracks around my house and my workplace. I used CAD in my job at that time, so I started editing with JOSM. and still not good at editing with the iD editor now. Since the GPS logger I was using at that time was non-easy to use, it used there not much editing.

I experienced non-local mapping due 2011 Tohoku earthquake. I remember tracing highways and buildings from aerial images by following hashtag #osmjp on Twitter. At the time, my building trace was not orthogonalize, so even now, I sometimes work on orthogonalize to their objects.

2011, OSMFJ got permit trace of Fundamental Geospatial Data(FGD) from Geospatial Information Authority of Japan(GSI). This trace is still my main target of mapping. Thanks to the members for their efforts to get permission.

Around that time, Community members was running import of The Yahoo/ALPS data in Japan. I avoided its data, because I had a lot of strange points about it(e.g. At least in my AoI, The ways had many unwanted nodes and some networks were incorrect.). For that too I was trasing highways in birthplace and around that, before the import is done. However, the import project was very good in terms of enhancing the road network in Japan.

And I joined OSMFJ at the invitation of one of my most respecting hacker and mapper at 2015. I am currently mainly in charge of “being lively”.

In 2016, I joined the WeeklyOSM editonal team, taking over predecessor. With powerful member. The efforts of the team, we are releasing the Japanese version every week. Great thanks to all of the team members and subscribers.

That year was my most exciting in OSM. I edited website and discussed conference plan for State of the Map 2017 Aizuwakamatsu. I learned the tools for edit website I used for the first time and frequently attended online meetings. Committee members and some participants may have had to condone my mistakes. Thanks very much for that condone. I hope my activities have led to the happiness of committee members and meeting attendees.

Around this time, I was starting fix errors from geometry and tagging, with OSM Inspector. This has increased number of small changesets. I also fixing broken forest relations. However, if I have a large relation feature, may not be able to fix it because my PC is poor spec.

I belonged to the organizing committee for State of the Map Japan 2018, operated the conference, edited website and had a session about the WeeklyOSM. In this conference, A new aspect of the map was discovered in collaboration with the “library”.

As you know this year, doesn’t do much ground survey, It’s the effect of a little Depression and the COVID-19. but I continue to trace buildings and fix errors, as well as working on Map Roulette challenges. The job I will get after treating depression may affect my contribution, but I will continue to enjoy contributing to OSM. There is no growth in my English, but one of the pleasures is to increase involvement in the global community.

State of the Map Japan 2018 was held in Tokyo, Japan. Local conference was the 4th time. This year conference gain 4 companies sponsored and 1 company backing. 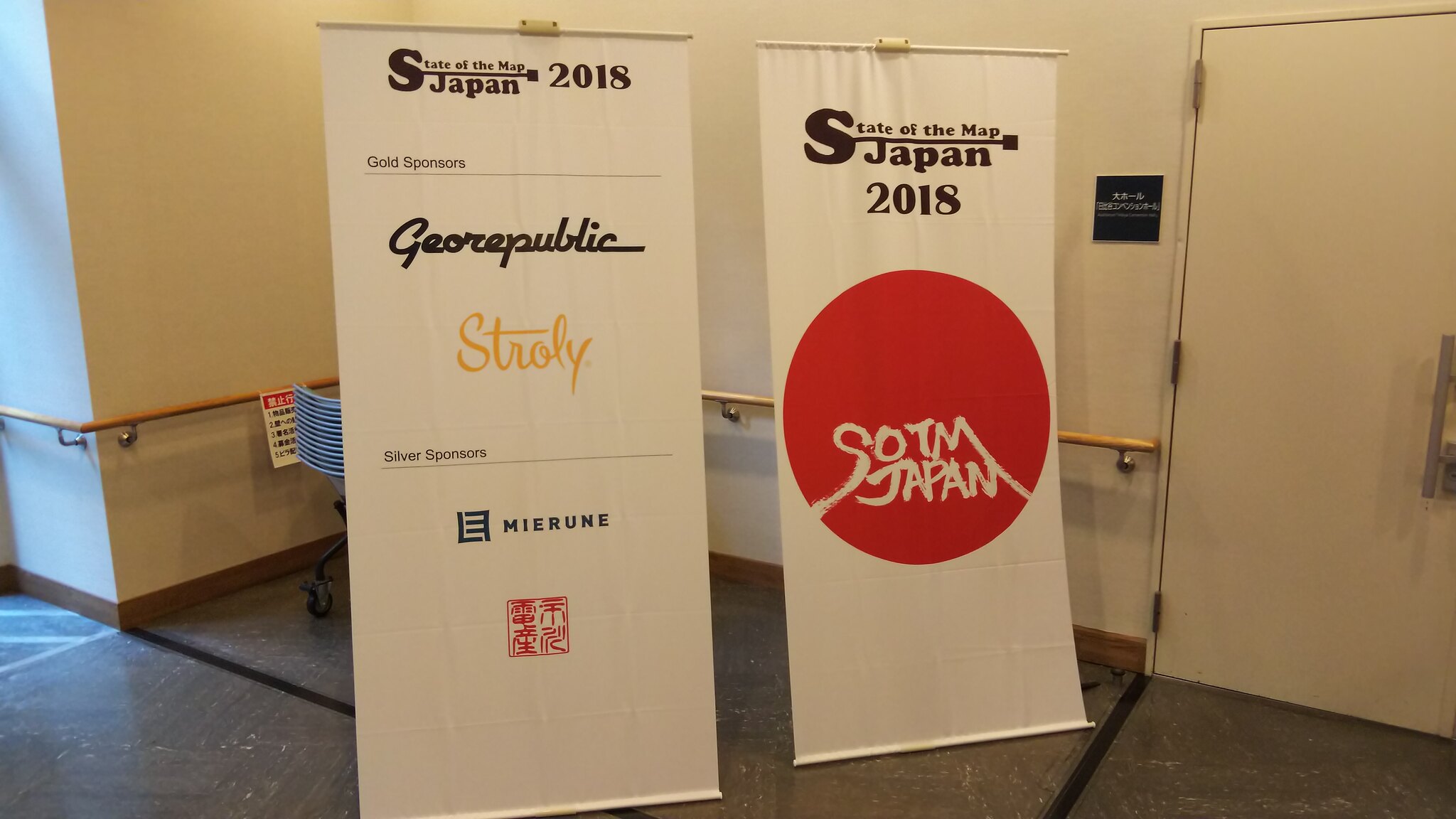 This year’s theme is “barrier-free of knowledge”. OpenStreetMap is a database that records “facts” on the earth in the type of features. It’s a signpost for acquiring new knowledge by the collected facts. It was a conference to think about the map necessary for exploring new knowledge. The map we make is necessary to obtain various knowledge equally, and it’s the power to remove the barrier.
The venue was a hall attached to the library and it became a place where collaboration between knowledge accumulated by humanity and knowledge recorded by mappers. 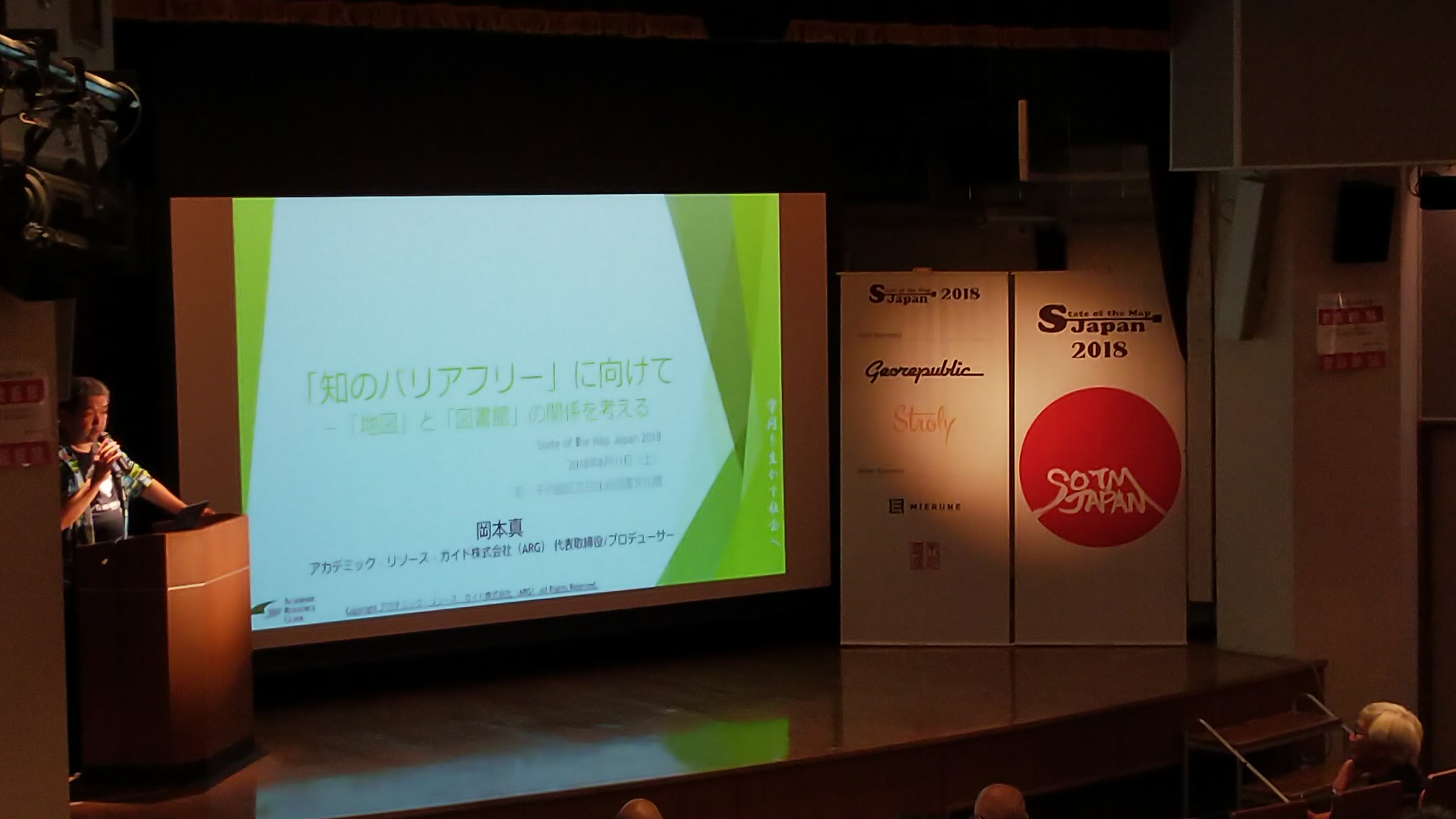 It was fabulous timetable, became one session room increased more than past conference, and two keynotes. 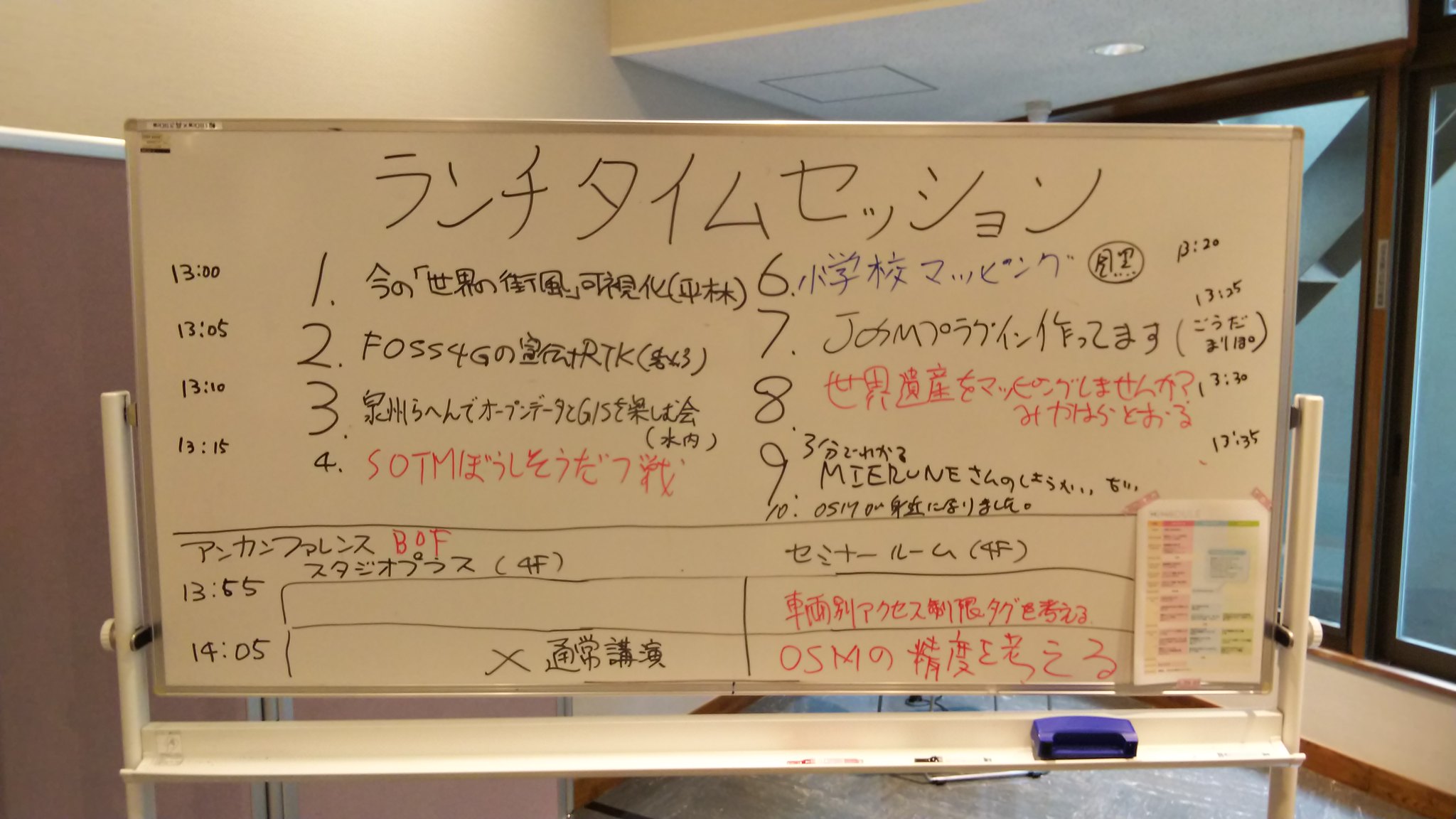 The unconference entrying at the event day was also a success. 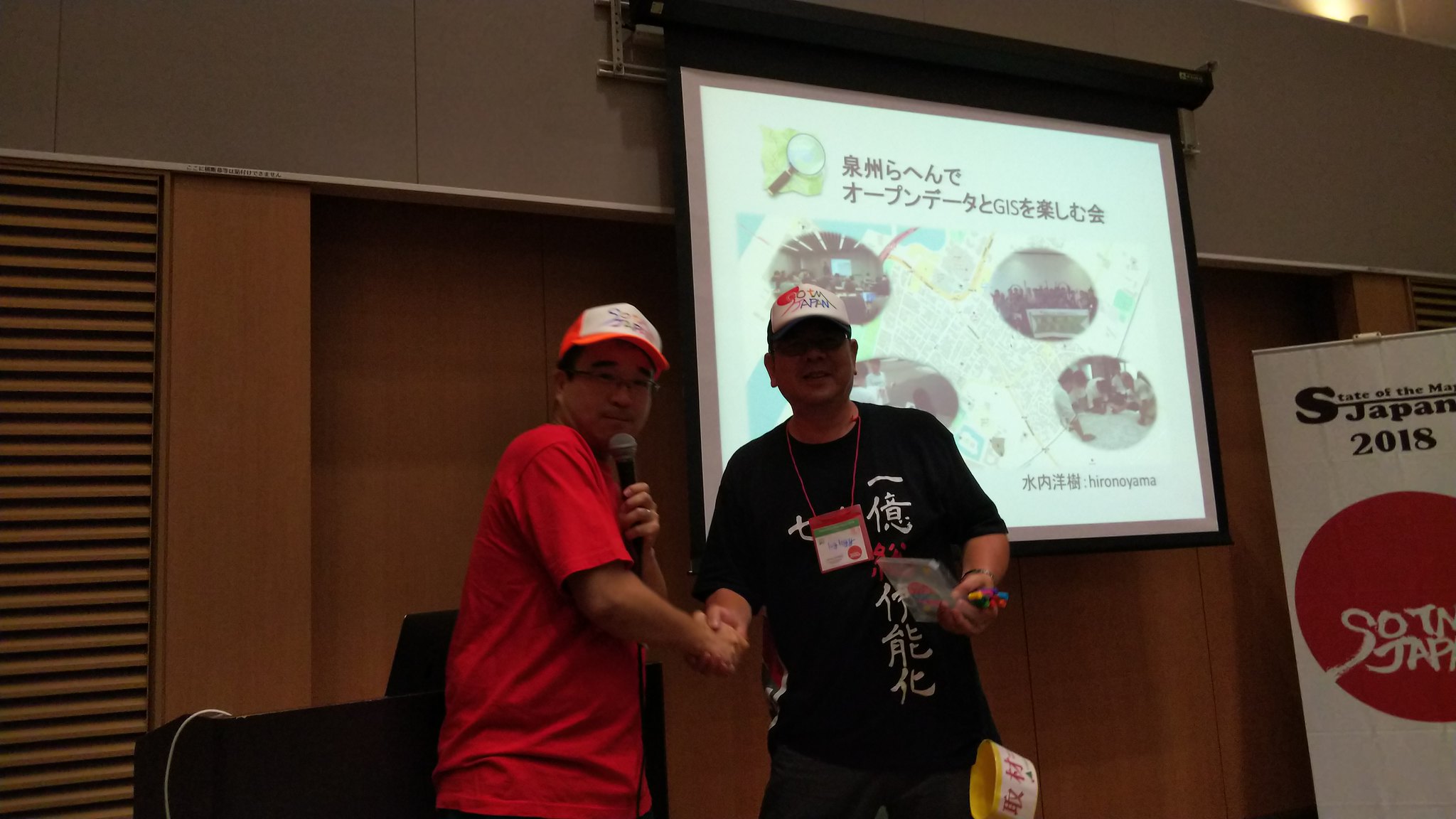 I was able to feel the spread of diversity at the meeting. That is to say not only how to related with OSM but also about Gender.

I continued to the conference held last year at SotM Aizuwakamatsu and was also involved in the operation as an organizing committee this time. This is a tough job, but there are also great pleasures. Let’s extend your joy by participating in the local communities conference organizing. There, you should be able to meet various people and new technologies.

Let’s meet at the next meeting.