My quest to map the fairgrounds.

I’ve seen for a while that my county’s fairgrounds are unmapped, but I haven’t mapped them as I have been unable to figure out a good way to tag them. Yesterday I was going though local notes and I saw one that was asking if the fairgrounds were indeed at the location there are at. This got me intrested in tagging them again, so I asked on the OSM-US slack for ideas on how to map them. A few sugestions I got were to use the amenity=festival_grounds or the leasure=park tags.

I like the sound of the festival_grounds tag, it seems like it is just the right tag for a fairgrounds. Then I opened the wiki…

The description on the page for amenity=festival_grounds is describeing an outdoor music venue. The page doesn’t have anything that even resembles a county fairgrounds. This doesn’t add up, so I head over to taginfo to see how the tag is used and where. It has 101 uses total, so it’s not used that much, but it’s more than a couple uses. I can’t use the map on taginfo because the tag is not used enough, so I do a search with overpass-turbo. Overpass shows a asortment of uses around the world, but mostly in America and Europe.

I took the results from my query into Qgis and went though each one placing them into categorys as best as I could. 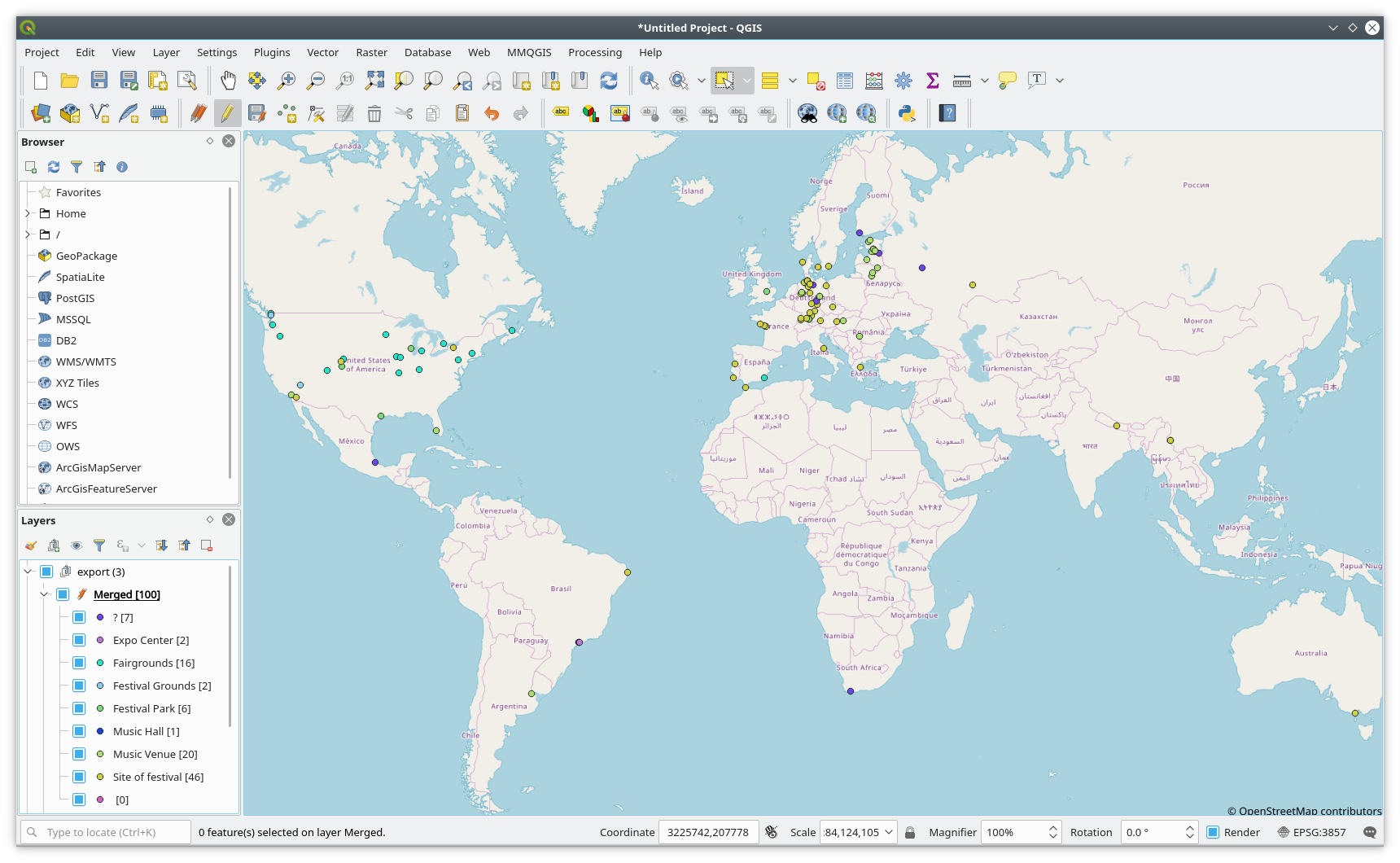 I did also convert all of the ways and areas into centriods so they would be easier to see and work with. So without further ado here are the results in order of most to least uses:

How should this tag be used then?

I think the first use runs afowl of “Don’t map temporary events and temporary features” and should not be a way that the tag is used.

Number two, Using the tag on music venues is very cunfossing, and the tag doesn’t fit the use. There is a proposed tag amenity=music_venue The proposal for it says it should only be indoor music venues, but I don’t see why it shouldn’t be used for outdoor venues as well.

Numbers 3, 4, and 5 are each slightly different, but I think each one could be considerd a valid use of the tag.

Numbers 6 and 7 just seem to have a completly differnt use, and I really don’t get why they use this tag. and of course number 8 I just couldn’t figure out what the actual feature was so they are kinda hard to talk about.

As for my local fairgrounds I think the best way to tag it would be with the festival_grounds tag, and of course the name. I know tagging it as a park was also suggested, but it really isn’t a park, so that doesn’t really seem right.

Lots of inconsistency here. Possibly owing to the varied purposes to which they are put, and the resulting things found there.

Warin61, Those show grounds sound almost exactly like fairgrounds, And the annual shows sound just like our county fair(Which is actually going on right now over here). So I think the same tagging should apply pretty well for both. I would just like to find something that can be used fairly consistently.

Yes - “showground” is British English for what Americans would call “Fairgrounds”. Local ones often less permanent - the nearest one to me is just a field with fancy gates 363 days of the year.

Many in the US are tagged as landuse=recreation_ground. I guess it’s mostly my fault.

It seems “show grounds” was proposed in 2010 but never adopted. Perhaps it is time either to revive it or to propose “amenity=fairgrounds”. Such venues tend to be permanent (and in the case of my home county, to host other events throughout the year, not just the annual county fair).

Fairgrounds in my home state of Washington state seem to be tagged either as tourism=attraction or as parks (but they are not really parks).

I dont know about everywhere else, but most of the fairgrounds in California where I map are tagged as park. Which seems completely wrong. Although I agree there should be a specific tag for things called “fairgrounds”, I think it should be more of a subset of the social facility tag, be considered a community centre, or have a landuse tag. As fairgrounds in America only have a fair there once a year for a weekend and they arent the lands main use. Well not doing the fair they serve other community uses like 4h club stuff, antique shows, etc. They also often have RV parks and race tracks. So, maybe something like a landuse tag would be best.