Third Anniversary of Mapping in the Peak District National Park

Posted by dudone on 22 February 2015 in English (English)

Yesterday marked three years from my first OSM changeset. Not long after starting mapping I set myself the objective of adding enough data to be able to make a good walking map of the Southern part of the Peak District National Park in three years. The main objectives were to survey and add all the remaining public rights of way (PROW) (footpaths & bridleways) and also to add all the field boundaries. When I started there was reasonable PROW coverage in some areas and virtually no field boundaries.

To put this objective into perspective there are, according to the National Park figures, 3510 PROWs in the park covering 1867 miless and 5440 mile of dry stone walls within the park. There are also good number of fences and hedges so the lenght of field boundaries to be mapped is probably half as much again.

I’m afraid to say I have failed to achieve the objectives in the three years I set myself. 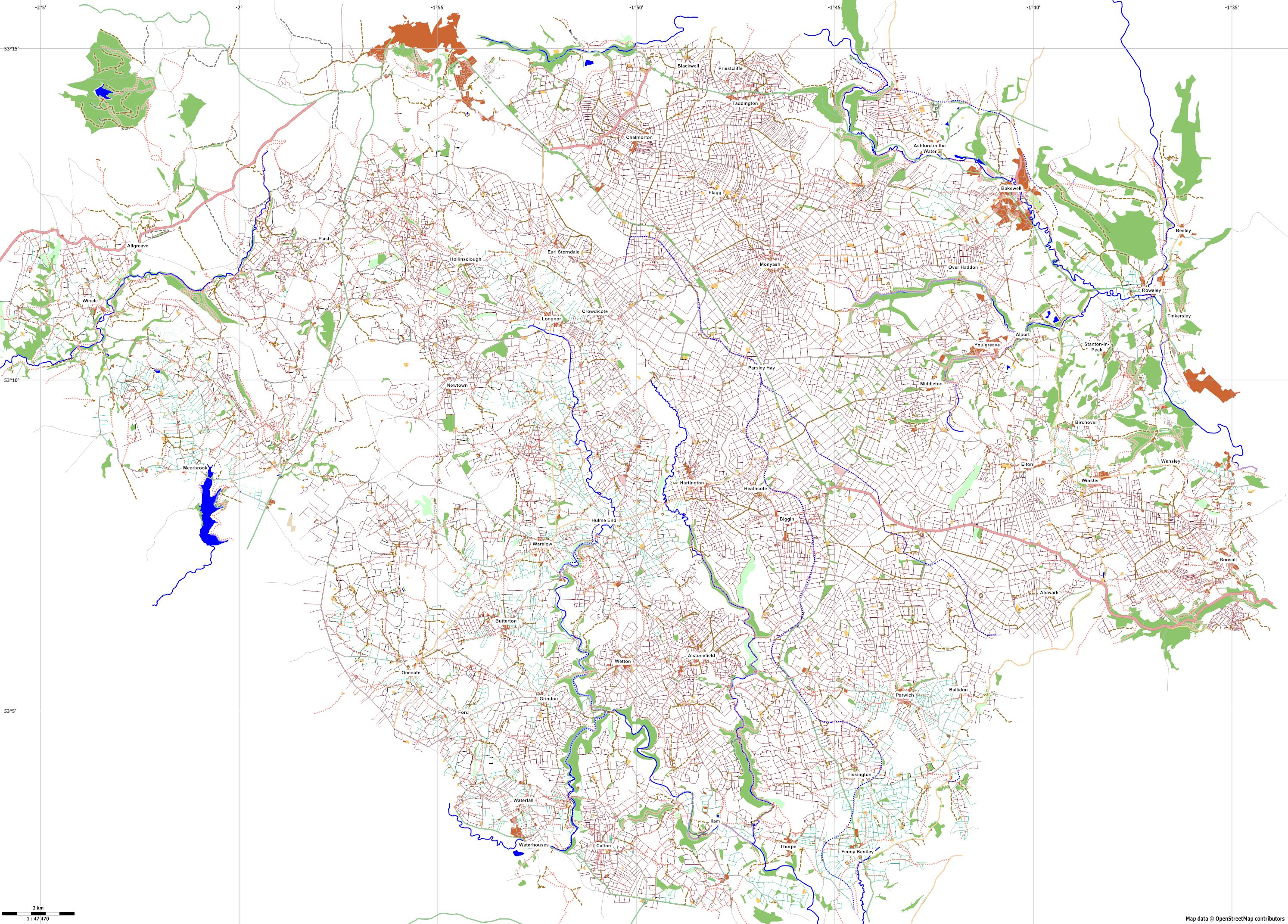 The above gives a representation of what has been mapped to date. I was hoping to have achieved single figures for the PROWs but it stands at around 20. In retrospect it was a mistake to have a target for achieving the objective in the middle of the UK winter. The weather and short daylight hours have certainly been against me. It is also proving quite time consuming to pick off the last few footpaths. Parking is often problematic so you end up walking several times the length of the footpath just to survey it and get the gps trace. Survey is also not that efficient when trying to cover new footpaths. I’ve walked almost 1500 miles in the last 3 years but probably only mapped a quarter of this in new footpaths.

Field boundary coverage it quite good along all the footpaths that have been mapped. There are still a few empty patches. Some of this is moorland without field boundaries. Other areas don’t have any footpaths so they have been the last on the list to map.

After initial experimentation with note taking, voice mapping I became an avid photo mapper. I use to take a few composed pictures but this was time consuming and you could almost guarantee you hadn’t taken a picture of something when it came to editing. I now don’t stop to take pictures but just shoot several picture is an arc at regular intervals. I seem to have amassed 378,099 pictures to date! They have certainly made editing in JOSM much easier and hopefully more accurate and detailed. Editing has generally taken up more time than surveying.

With luck I will complete the above objectives for the Southern Peak District National Park in the new few months and is should be possible to produce, with the addition of contours, an alternative walking map for this area. It is then on to the Northern Peak District. Although it covers a larger area, large parts are moorland so the actual number of field boundaires is probably less. I was hoping to do this in another two years but logistically it is more difficult and surveying will have to be limited to the summer months.

The Peak District is a good place to go walking so hopefully this work will prove useful.

Are your pictures geotagged? They would make quite an addition to Mapillary.

I’m afraid not. It could be done with the JOSM plugin but it would be a very big editing task as they weren’t taken with this in mind as many wouldn’t be suitable for uploading.

That is an epic and wonderful achievement. Good luck with the Dark Peak!

Hello, are you interented in writing a short article about your mapping in the Peak District for the British Mountaineering Council Peak Area Newsletter? It would help raise the profile of OSM and might get more people mapping. I’m the Editor for the Newsletter and you can contact me at peakarea@gmail.com