the centre of Berlin

Posted by dieterdreist on 23 March 2017 in English (English).

This is a follow up of my recent diary entry about the centre of Rome and in parts a reply to Warin61’s comment to that post.

I believe the local people usually know where the centre is. They tell you when you ask them. Give it a try, I bet you’ll see that you get similar answers.

I would expect this most central spot to be often in front of the townhall (maybe sometimes the cathedral) or the main market square (in traditional towns) or likely both. Maybe the train station can be such a center as well (in more recent towns which developed after the railway was invented).

Streetsigns aren’t useful from my experience. Often the centre is inside the main pedestrian area (typical for Germany, where many historic city centres have been pedestrianized) and it is generally so big that you will get signs in the outskirts indicating “city centre”, but when you arrive there will not be a sign stating “this is the city centre”, the signs will simply stop indicating a centre when you are in a central area (they might indicate “all directions” now, but that’s a different story, maybe to be told another time).

### West Berlin In special cases there could even be several centres, e.g. Berlin (there might be a bit of a difference between big cities and smaller towns). For West-Berliners, the centre was likely Breitscheidplatz (in OSM) and as you can see it is also very close to the former main station of West Berlin, Bahnhof Zoologischer Garten). 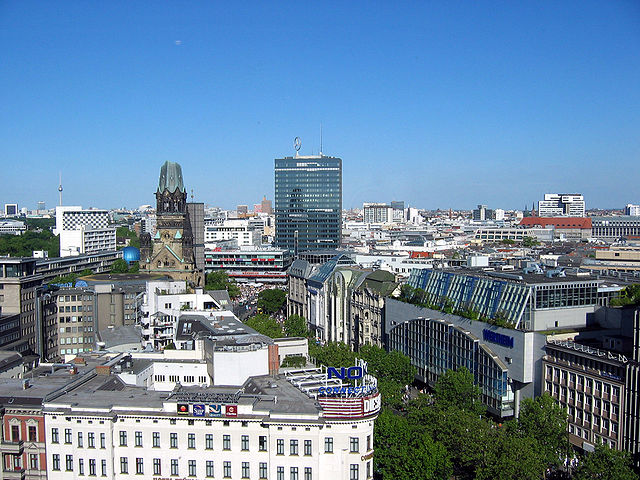 ### East Berlin For the people in East Berlin it was probably Alexanderplatz (in OSM) with the centre extending also to here (between tower and main town hall. There might be some other opinions because the former centre (castle) was also reclaimed by the officials, naturally (see below). This is Alexanderplatz, you can also see the prominent tower, visible from everywhere in the city. Huge towers are generally issueing a statement of centrality). There’s also a station, but it is not important as a train station (it is a very important underground station though, with 3 lines crossing):

Another central spot and maybe the official centre during the GDR, surely during the German Empire, is the palace (Stadtschloss) (now in reconstruction), (in OSM), in times of the GDR this was the place of the “palace of the republic” (Palast der Republik), at its side there is also the national council.

In this map from 1688 you can see the central island (yellow-green). By that time there were still 2 towns, Berlin (purple) and Cöln (yellow), and this origin is likely a reason that there’s some concurrency between Alexanderplatz and the castle. The castle is signed a. Alexanderplatz is in Berlin, while the castle is in Cöln. 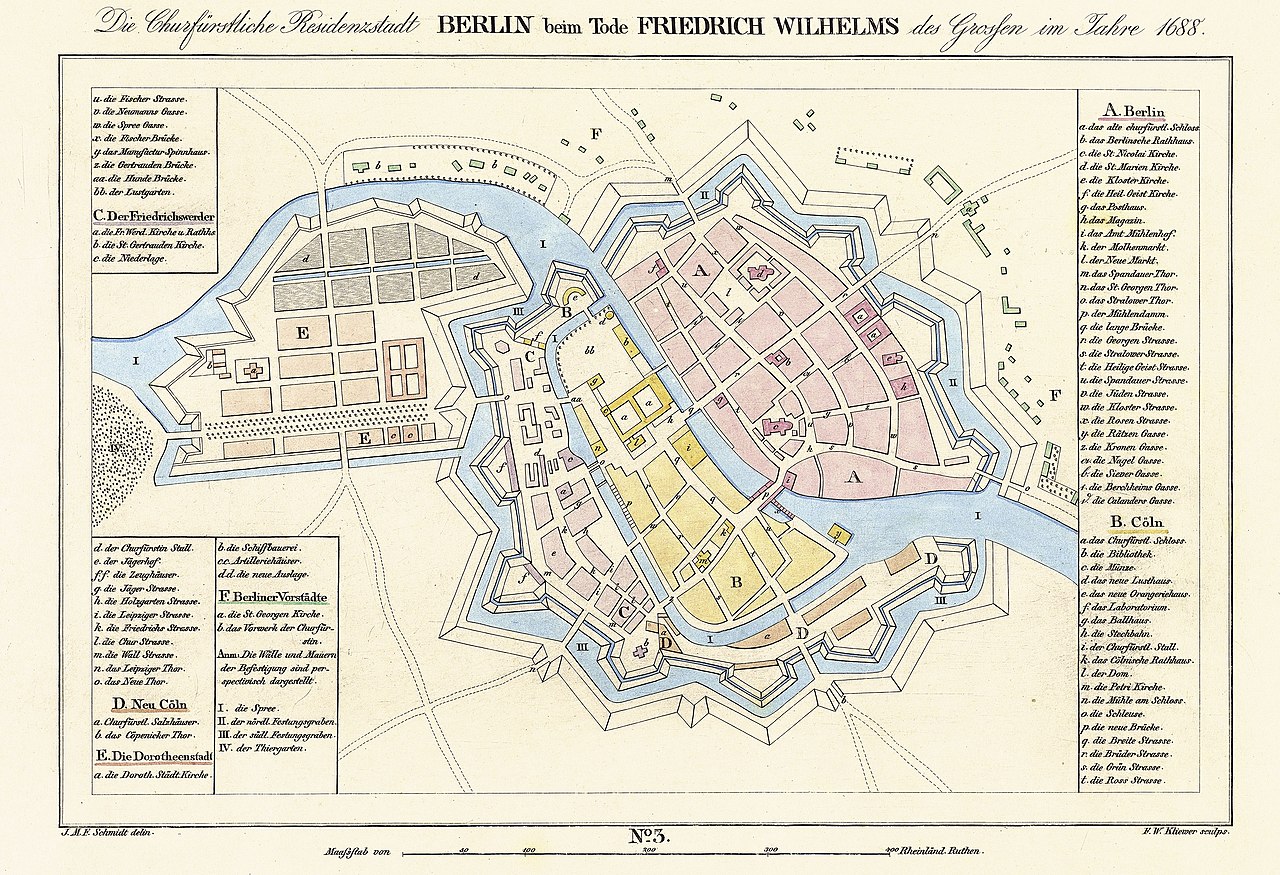 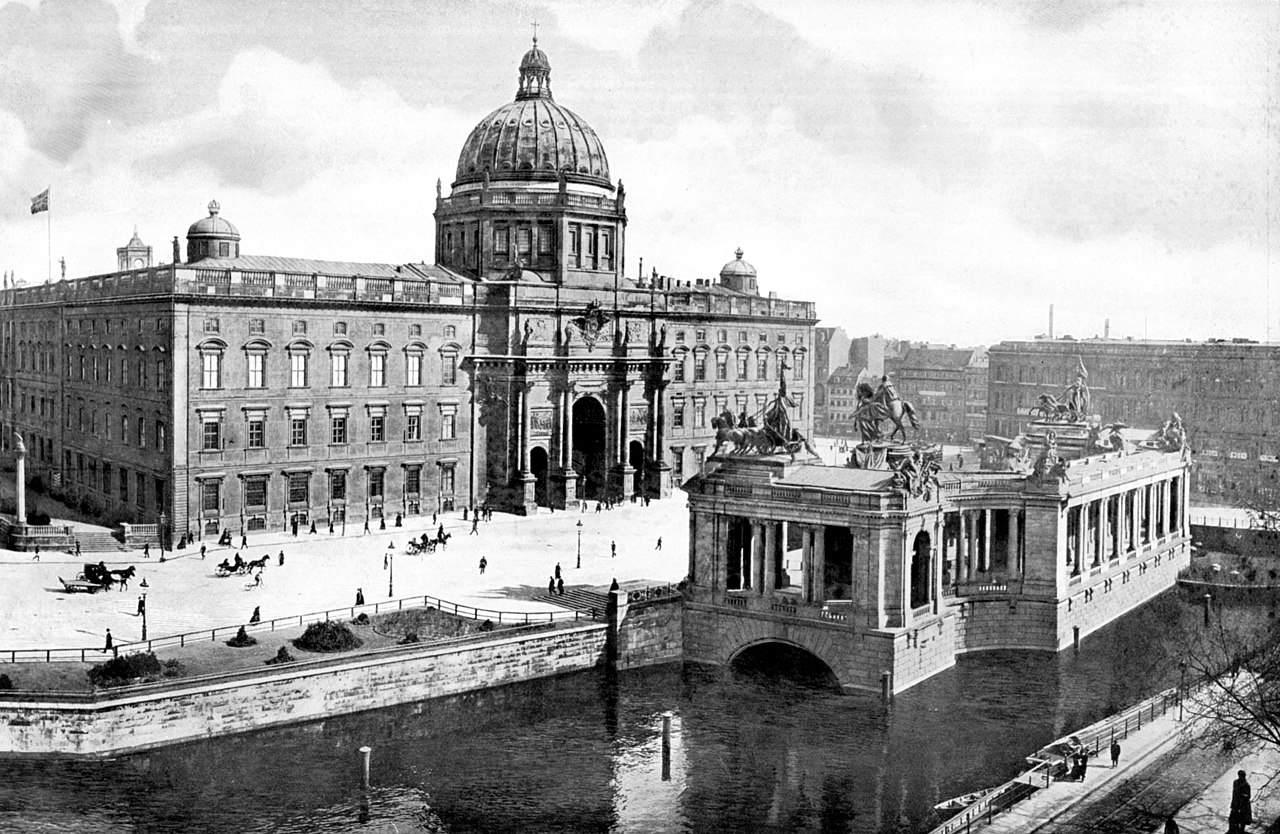 After tearing down the castle and waiting 20 years (in the meantime they set up a permanent grandstand for their military parades on national holidays), the palace of the republic was errected (after the reunification, the Germans waited again 20 years, until they decided to demolish this “palace” and reconstruct something which imitates the imperial castle’s volume and facade).

Grandstand for parades at the place of the former castle, 1952 (likely not perceived as a centre):

Closeup of a parade in front of the Palast der Republik, 1978: 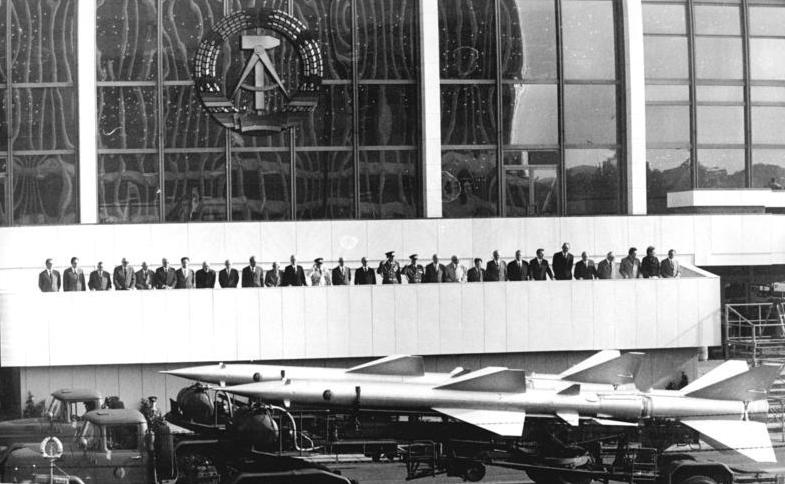 Palast der Republik from the inside, 1976

Here’s another map to illustrate that this is the centre of the centre (also note how the avenue “Unter den Linden” points straight to the castle (=centre), for many kilometers, and bends right in front of the centre to pass the castle). In red the former castle, gray underneath the palace of the republic, to the north-east Alexanderplatz and its tower):

The current reconstruction called Stadtschloss, (2015). Very visible how Unter den Linden bends for the castle, see it also in a much bigger scale in OSM. This is the main road, leading straight to the castle (current federal road does not completely follow the old road, but I think you can get it) and at the time used by the king to got to his residence in Potsdam. What is now there is in part also result of more recent times: the Nazi plan by Albert Speer).

The OSM crowd currently has set the centre a bit closer to the west, at the crossroads Unter den Linden and Friedrichstraße (in OSM), it’s not completely off as this is a very central place (and in the historic parts of Berlin, pre-industrialization), but it isn’t a centre where you would go to gather for protest (these would be Pariser Platz in front of Brandenburg Gate and close to the Reichstag, or Alexanderplatz).

I will soon have a look how this node moved around in OSM with the years (and also look for the previous Berlin node that was deleted in 2008).

I would expect this most central spot to be often in front of the townhall (maybe sometimes the cathedral) or the main market square (in traditional towns) or likely both.

In Britain, it’s often a central junction where the historic through-roads meet. So in Oxford it’s Carfax, in Gloucester it’s The Cross, here in little Charlbury it’s Bull Corner, and so on.

Yes, you can find this historic central junction in many places, although I am not sure if I would associate it with the “centre” in the case of Rome, where the expression of the “central centre” was a couple of main temples on the palatine hill above the forum. In Leipzig, the historic crossing was here, but the current centre IMHO could be in front of the old town hall, or maybe where the locals have put it.

Also bridges often play an important role (settlements are often founded along rivers, more particularly at spots where you can cross the river easier than elsewhere). In Berlin, the most important historic bridge was this and as you can see it is quite close to the castle but still distinctively different. After slightly de-routing the ancient merchant’s long distance road which passed in Spandau and Köpenick (older towns than Berlin, now suburbs of Berlin), the merchant main road passed by Cöln on that bridge. This road splits Cöln (the central island, formerly independent town) into a northern part (castle and related buildings, later also museums) and a southern part (Fischerinsel, fisher’s island).

In Rome there were also confluencing important merchant roads like Via Salaria (salt road), the Via Latina (Latin Road), and if I recall right an important crossing was close to the eldest bridge, a wooden bridge (Pons Sublicius) which is now lost, close to the tiber island (where you can still observe 2 original ancient Roman bridges). The oldest Roman stone bridge was the nearby Ponte Aemilius from 174 B.C.:

here in OSM These places are some 300 metres distant from the actual centre on the hill.

Sorry, there’s a typo in the previous comment, it’s of course not palatine but capitoline hill.

Here is a model of the first settlement of Rome in archaic times, with the capitoline hill close to the river, from where the development went on. Here the valley around the hill is already covered with houses and the first stone temple is errected on the hill, dedicated to jupiter: 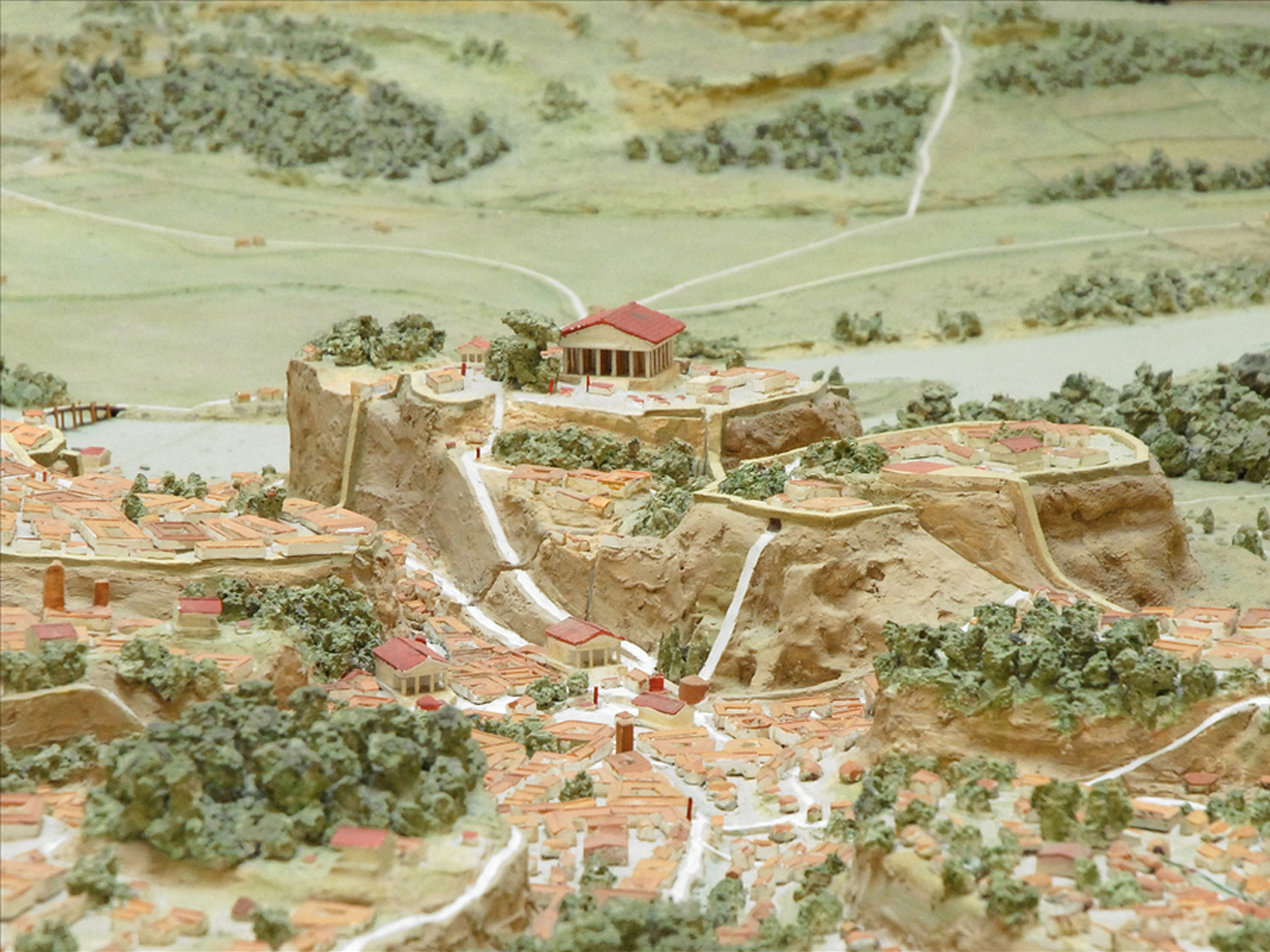 the square on the capitoline hill in the 18th century, similar to how it is today:

This is an interesting discussion. When I started reading this, I thought about the center of Berlin, and my immediate answer was: Brandenburg Gate. It definitely is not some kind of historic center, because, after all, it is a gate, located at a border. But Berlin is special and the Brandenburg Gate is special. It is the place where East and West meet, so in a way it is in the center. It is historically important as a symbol of the split and re-unification of Berlin. It is definitely the place where crowds gather for important events. The Stadtschloß might have been important once, but it isn’t any more.

It’s interesting you mention Brandenburg Gate. I agree that it is a very good candidate for the current centre of the whole city (as opposed to local centres, Berlin is known for being polycentric by urbanists), for several reasons:

While I am not suggesting to use Breitscheidplatz as the current centre (it’s a centre only for West Berlin), I believe there are at least 3 good candidates for a centre of the whole city: the mentioned Pariser Platz / Brandenburg Gate, Schlossplatz and Alexanderplatz. Here are the arguments for the other 2:

Both, Alexanderplatz and Schloßplatz, are also very close to political power (the senate of the Land Berlin, Rotes Rathaus, lies in between both). Maybe the Brandenburger Tor (generally

There’s even another central place that might be perceived by many as the centre (and which has been hyped a lot by big money): Potsdamer Platz. (My impression is that this is the centre for the people living close to but not in Berlin, maybe still after Alexanderplatz though).

Everything inside the S-Bahn ring.

The place / grass before the Reichstagsgebäude should be mentioned, too. I am surprised that this very huge space is not so important for gathering crowds. But Berlin has so many places as you pointed out.

it is forbidden to gather there (“Bannmeile”)

I’ve done it where the directions I asked for were “to the university center”. On one time of doing this, I realised the directions were aiming for the other campus (about 1 hour walk away) so we stopped following them early and found someone new to ask. We repeated this until we ran out of time to do the psycogeography activity (thanks Tim Waters for leading the session).

@LivingWithDragons yes, I can imagine it useful for some cases (smaller places, e.g. the university you mention, a hamlet or village or small town), but in big cities people will look strange when you are in the centre (area) and ask for the centre. The centre in big places is usually/often perceived to be an area, not a single point (there are exceptions as well). You might ask about the “centre of the centre” though, and maybe get useful replies. I have done this with several people for the centre of the centre of Rome, and univocally received the equestrian statue of Marc Aurel on the capitoline hill as a reply. In Berlin it is more complicated, because of the different epoches of history and many potential centre spots due to this history and the current situation.

Some places are very easy to solve ;-)

Auroville in India, everything spirals around the centre (place of worship)

Karlsruhe in Germany, radial streetsystem pointing to the king’s castle which is in the middle of the town and nature (park north of the castle).