Go Map!! on your Mac

Did anybody ask for a desktop version? In fact a few people did, but the primary reason to release it is “because we can.” Many people edit using iPad, and many of those people use mouse/keyboard, so adding support for those input methods got the app 80% of the way to full desktop support. Enjoy! 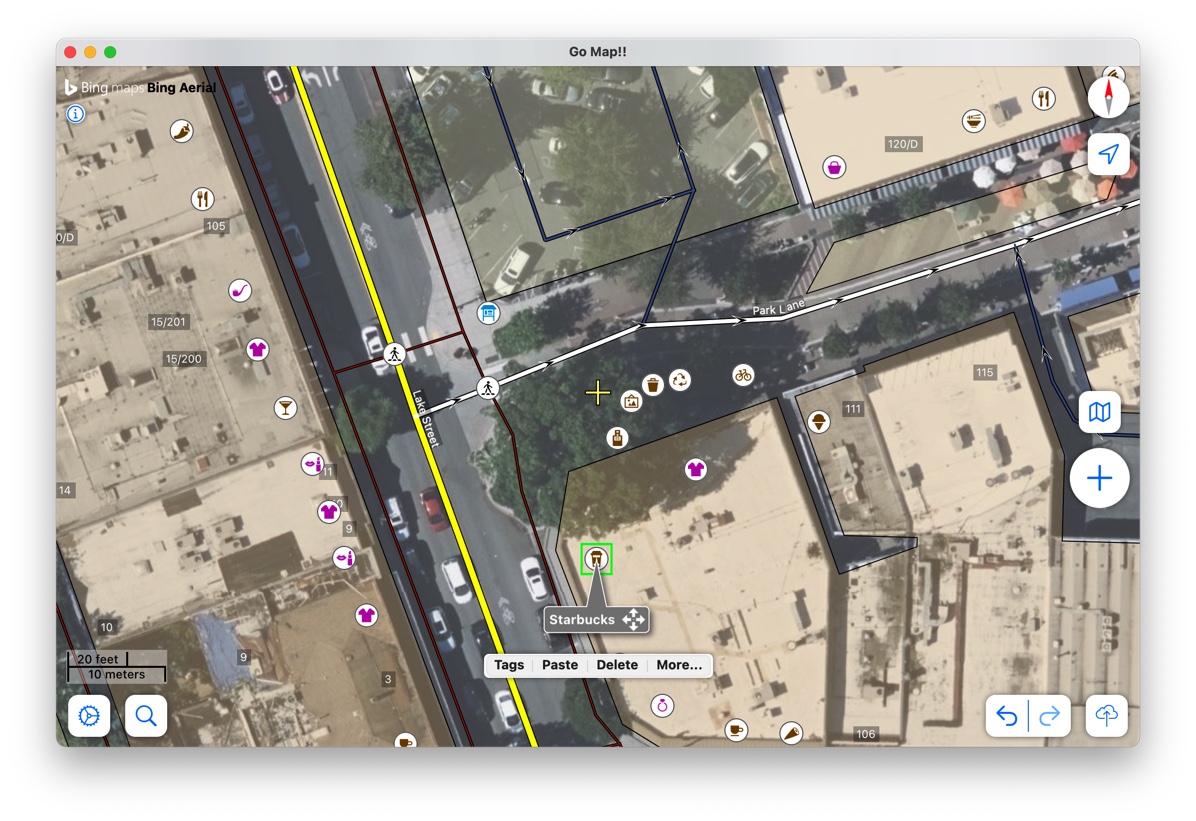 State of the Go Map!!

Posted by bryceco on 3 October 2021 in English (English).

Go Map!! v3.0 was released today for iOS, and while superficially not much looks different, there are some big changes under the hood: All 38,000 lines of code are now written in Swift after a laborious conversion from it’s original Objective-C implementation. This make the code faster, easier to understand, easier to debug, and brings it in line with Apple’s direction for modern apps. It also greatly simplified a lot of refactoring to improve general readability of the code base. If you’re a developer this is a great time to get involved with the code.

My involvement with OSM started in March 2012 and I wanted to be out surveying and mapping on my iPhone. I had downloaded the few iOS apps that existed at the time (remember iLOE and Pushpin?) and found them too limited. Although I had a strong Windows/C++ programming background I was new to iOS, Objective-C, OSM, and GIS. Nevertheless I began work on the first version of Go Map!! writing in Objective-C and learning about the OSM API along the way. (Apple did not introduce the Swift programming language until several years later, and it took an additional several years to become stable.)

I wasn’t really sure whether a new mobile editor was something of interest to the OSM community, but in October 2012 I drove down to Portland, OR for my first SOTM US, where RichardF (author of Potlatch, the OSM web editor at the time) delivered a talk titled (IIRC) “Let a thousand editors bloom” where he suggested that OSM should have a wide variety of editing tools, and the more the better. I’d been working on the app for only a couple months and his talk inspired me to continue.

Soon after that I began attending the OpenStreetMap Seattle meetup that Steve Coast was organizing at the time. While he was clear that he would never use a mobile editor himself he still encouraged my efforts and provided feedback on the user interface and other aspects of design. He especially disliked my terrible taste in app names, which went through several iterations before arriving at what it is today.

Go Map!! v1.0 was released on the iOS App Store on Jan 24, 2013. The range of features has increased on a slow and steady pace ever since, but due to the inertia of the code originating as Objective-C most improvements were added in the same language for consistency. Going forward all work will use Swift.

Bonus fun fact: Initially I wrote the app for Mac, then migrated it to iPhone. Although the original Mac app is gone you can still build and run Go Map!! on your desktop using Xcode and Mac Catalyst.

Thanks to everyone for your support, suggestions and contributions along the way.

The latest version of Go Map!! is now available on the iOS App Store featuring:

Posted by bryceco on 25 September 2018 in English (English).

Go Map!! is an OSM editor I maintain for use on iPhone and iPad, available from the App Store.

Version 1.6 was released last week, with the primary improvement being support for multipolygon relations, and much improved protection against accidental damage to relations of all types.

More importantly, I’ve published the source code on GitHub if you’d like to contribute or use the code in your own project: https://github.com/bryceco/GoMap Building the source requires a Mac and Xcode. Contributing code requires fluency in Objective-C. It is released under the ISC license, the same as iD.

If you are a frequent user of Go Map!! and wish to be a beta tester please send me an email using the app’s “Bug Reports and Suggestions” button.

Finally, here’s a short video showing basic use of the app: https://youtu.be/GUWg4d-jt5o

The 1.1 release of Go Map!! is available in the Apple App Store today. It includes many relatively minor usability improvements:

About 7500 people downloaded version 1.0. Hope you enjoy the update!

Posted by bryceco on 2 February 2013 in English (English).

The wiki has a nice page on editor usage statistics showing how many people are using each editor on a year-by-year basis. The data is compiled using data available from this page, where each 550MB archive contains the entire history of changesets starting in 2005.

Because I released Go Map!! about a week ago and the weekly changesets file became available last night I wanted to see the degree to which people are using Go Map!! for real editing. Here are the top editors sorted by number of edits for the week ending Feb 1: Go Map!! has a very solid showing at position #4 for its first week, and as people become more comfortable with the app’s feature set and mapping on a mobile device it seems entirely reasonable to reach 100K+ edits/week in the near future. Clearly many people want to map on the go, rather that at home in front of a computer.

I was surprised at the proportions of the countries downloading the app. While supporting multiple languages would be nice to have, at least in the short term it doesn’t seem like being English-only is limiting the user base much:

I’m also disappointed and sorry that a font rendering bug in v1 may make many street names render incorrectly in those Asian countries, and it will be addressed in the next update.

At first most downloads were in the US and Europe, then later in the week Russia and Asia were the largest downloaders. It will be interesting to see at what level download rates stabilize over the next couple months. OSM is a relatively small community and it is hard to predict how quickly market saturation is reached: Around 1200 people had downloaded the app when the changeset snapshot was made, but only 170 people had uploaded edits, so the rate of use isn’t as high as I’d like. Part of this might be due to the font rendering bug that affects non-Roman fonts, disenchanting downloaders in Asia/Russia, and part just because of the relative newness of the app.

My new OpenStreetMap editor for iPhone and iPad is now available for download from the App Store: Go Map!!

Or you can read about features and use on its wiki page.

I have lots of improvements and additional features I’d like to add in later versions and it would be great to have additional beta testers. If you find yourself using Go Map!! on a regular basis and want to receive the latest builds and provide feedback please let me know. I did a pretty big test of my iPhone OSM editor today. I’m in Mexico and don’t have cellular connectivity, but nevertheless I was able to download the Bing tiles and OSM data at the hotel over wifi, then walk around town adding almost 70 POIs, and then come back to the hotel and upload everything. Full changeset for my walk is here: http://www.openstreetmap.org/browse/changeset/14384380

Posted by bryceco on 6 December 2012 in English (English).

I am working on a native Cocoa based editor, with the goal of having a reasonably high quality editor for iOS devices. I’m starting with a Cocoa-based desktop editor, will then port it to iPad, and then to iPhone. It will never have all the features of JOSM, and possibly not even Potlatch, but it will be a fast, friendly, easy to use, mobile editor whenever your primary device is an iPhone/iPad and you’d like to do some OSM editing.

If you wonder why we need yet another editor, RichardF (primary author of Potlatch) has a nice overview of the need for new and better editors in his blog (http://www.systemed.net/blog/index.php?post=24).