I’ve come to notice (and it wasn’t a surprise) that rural areas and especially the historical features there (castles, churches, standing stones, dolmens) in Ireland are somewhat poorly tagged. Now, to be fair, I haven’t compared with other countries, but I think a lot needs to be done there. The main reason is probably that OSM is still not known enough in Ireland amongst the demographic that is interested in this area of history, but I’m trying to tackle that with my YouTube series.

Another reason is maybe simply the lack of appropriate keys and values in Ireland, which results from too few people trying to map them. I will try to propose several keys/ values which I think are both essential for tagging historical places and features and will also entice new mappers to use them in their locality.

The first one are guard stones, which are by no means limited to Ireland, but there happen to be dozens in Kilkenny and it was suggested by a non-mapper that they could be included. The voting process is open now.

The next one will be ogham stones for which the proposal is open and the voting will start within the next couple of days.

I would also like to tag former building uses like creameries and RIC barracks which are now often re-used or derelict. Creameries were the social hub of the village or town where everyone would meet and exchange the latest gossip, so they played a vital part for the locality and have historical value through that.

I have used castle_type=towerhouse wherever I knew from having been there or could see on the satellite view it was one. There is no official tag, but castle_type=userdefined is allowed.

Another feature worthy of tagging is sheela-na-gig (see on Wikipedia), I’m just not quite sure if it should have its own icon. :D

I was recently asking Rory McCann if he could remember some recommendations which Brian Hollinshed made about tagging such features. Unfortunately I havent re-located this information.

ad Ringforts: I would hope that the tagging is consistent, as the tag is quite clear and established.

ad Dolmens: I think they are not limited to Ireland, but I would suspect not much attention has gone into mapping them in Ireland. I could be wrong.

ad Holy Wells: I’m not aware of a tag, adding the name would help to identify them as such. The British War Office map has some of the names, I think.

ad Celtic Crosses: I agree that they are not the same as wayside crosses, however, tagging should make their historical period clear, because they are still used as grave markers. Shouldn’t say “still”, because that’s not what they were in the Middle Ages.

ad Round Towers: I agree as well that they should have their own sub-category and that man_made=tower is often not satisfactory. However, I’m not sure if there is a consensus about their use as bell tower. Is there not also a school of thought that they were used as watchtowers to see the Vikings coming? They could of course have had a dual function.

ad sheela na gigs: Also not limited to Ireland which I only found out yesterday. We will still have to do a proposal for it, I presume. Including “moved=*”, because a lot of them were. There’s a guy 3D scanning all of the ones he can access.

ad Passage Graves: Yes, historic=monument is the lazy way of tagging them. On a similar note, I think we need historic=burial_site which could apply to cillíns as well, because they are neither graveyards nor cemeteries imho. Maybe passage graves and cillíns could be a subcategory of that.

I think all of these have examples outside Ireland: Celtic Crosses on the Atlantic seaboard of Argyll (Iona, Kildalton etc); Passage Graves, at least one example in Brittany, two round towers (Brechin & Abernethy) in Scotland, and dolmens are common across much of the UK and France to my personal knowledge (Wikipedia cites them from across the world with masses in Korea).

I think burial site is a very sensible approach as it can covers tumuli, long barrows, kurgans, tholos tombs & many others.

This is a photo of the holy well I surveyed: 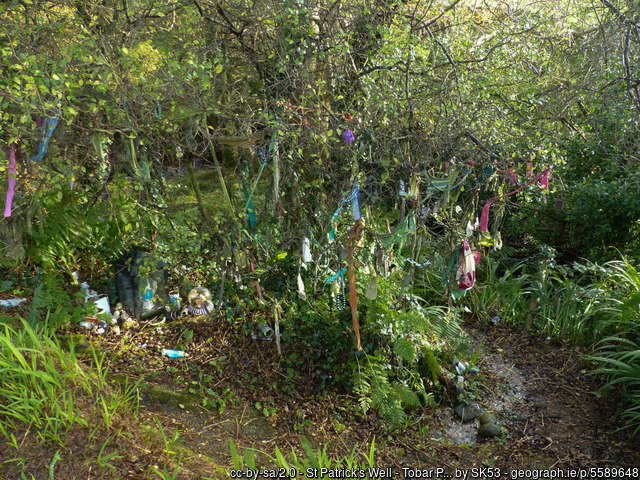 Various stone types, including Ogham stones, are now shown on this map. I can have a go at adding some of the other archaeological site types etc. as well.

ad holy wells: Your photograph brings up the topic of raggedy bushes. I think they should be mapped too, to be honest.

ad sheela-na-gigs: I have mapped two (1 and 2) now using your suggestion for sculpture_type, but I’m not sure if it should not be sculpture_subject instead. I remember visiting another one, I just have to find a reference.