We are still in Covid-19 Lockdown, I’m still diligently mapping schools in the HU (Hull & East Riding of Yorkshire) Postcode, and I’ve reached an interesting school near Anlaby that incorporates my family’s Alma Mater of Hull Grammar School (I wondered where it had gone).

HE tags for Tranby Croft (these are specific for the UK):–

My father, myself & my son all went to Hull Grammar Schools. Because of the vast churn in Hull, we all went to very different buildings (my grandson goes to a grammar school in Hertford, but if it had been in Hull then it would also have been at a different building to all the other three). Hull has zero respect for history; it used to have some medieval buildings, but they got torn down following WWII, even though they had zero war damage, presumably because they were too old.

Hull Grammar School (for boys) is reckoned to have been founded in 1330. A house in the old-town Market Square was built for the school in 1486 (Blue Plaque) (picture below) and remained a school until 1878. It had two very famous old-boys in William Wilberforce & Andrew Marvell. 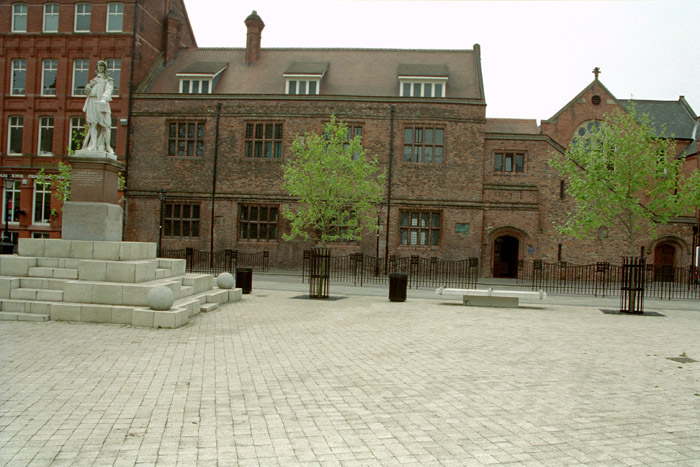 I had a table at the market held there each Saturday when a young man, and my back was to that wall. Sadly, no-one in Hull seems to have thought to map the buildings properly nor to photograph them for Mapillary. That’s a shame, so I’ve mapped it, at the least.

HE tags for the old Hull Grammar School (these are specific for the UK):– 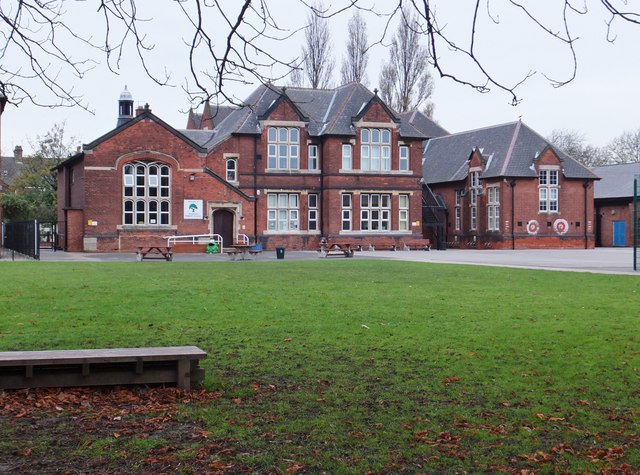 My father was at the school in the 1930/40s, and presumably that means at (what is now) Pearson Primary School on Leicester Street. There is zero info that I can find to confirm that, but the wiki information is that Hull Grammar moved into “a new and commodious building … on Leicester Street … officially opened by the Mayor of Hull on 27 January 1892 … built in the Collegiate Gothic style”. That matches Pearson perfectly, but there is nothing within the school website about it’s history. The school is round the corner from Mayfield Street where my father lived with his family.

My father had to pass the 11+ Examination in order to be accepted in to the school. I had the same-name exam to pass in 1961 at the end of my year at Hopewell Road Junior School. When my father heard this he passed on a piece of advice:–

One of the questions that I got at my 11+ was:–
“Which is heavier: a pound of feathers or a pound of lead?”

Naturally I scoffed at that. That was a question from the Stone Age. What was the point in telling me that? (yes, it was one of the questions on my paper). 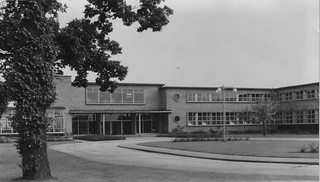 The place I attended in the 1960s was a nondescript post-war (1953) building that taught boys (only) from 11 up to 18 years. It has since been torn down, and now just a plain field on the edge of the city boundary remains. I doubt that anyone will miss it. I hated the place; it was soul-destroying.

One of my clearest moments with the school is a Stockholm Syndrome moment. It was 1969 & my last day attending; my future was to go to Newcastle-upon-Tyne University after the summer, and I was elated that my imprisonment was over. But then, as I stood on the steps of the school to go, I suffered pangs of regret that I was about to leave (and considerable confusion at my mixed feelings).

This is the failed branch of the family. Amy Johnson School was an 11-16 years girls school at Ringrose Street, a few miles away (edubase=118110, the area has been redeveloped). It merged with William Gee in 2001, renaming the combined school as “Endeavour High School” (edubase=133422, Fountain Road, also redeveloped since then).

This is the more-intelligent branch of the family.

Marist college was a RC school for boys (edubase=129325) that got closed down as a part of the carpet-bombing that affected all Hull schools in 1988. It amalgamated with St Mary’s Grammar School (a RC school for girls on Anlaby Road) and successfully became St Mary’s College. Marist & St Mary’s were the only Catholic secondary schools within the whole of the East Riding, and thus had a large region to draw their intake from.

A group of folks got wind of the impending changes at the 1988 school reorganisation and decided to rescue both the name & ethos of the Grammar School. Thus in 1989 they created a new independent Hull Grammar School, a co-educational school for pupils up to the age of 18 years, using the former Marist College building as it’s base. This is the school that my son went to (he was born February 1973).

An interesting personal feature is that, following divorce, my son was living at his (maternal) grandparent’s house at Ventnor Street. And so, in an odd twist his situation was virtually identical to my father’s in the sense that the Grammar School was literally just around the corner from where he was living. That was the polar opposite to me, in that I lived next to the City boundary, and the Grammar School was 180° (and tens of miles) away at the other City Boundary.

My son went to university in 1991, but in that year the Grammar School hit severe economic difficulties and was acquired by Nord Anglia Education plc from the administrator.

United Learning (formerly United Church Schools Trust) is a Church of England-affiliated body that ran Hull High School — a co-ed 11-18 Independent School, with a girls-only senior school — since 1890 (EdBase states 1918). They bought Hull Grammar School in 2004, merged it with Hull High, and opened in July of the following year as Hull Collegiate School at the same site as Hull High, which is Tranby Croft.

The only place that I have been able to find Grammar School in the new school is in their School badge:

Fun facts:
The 3-crown flag (LHS of the Collegiate badge) is:

I should not finish without mentioning that Tranby Croft is just outside the Hull city-boundary so, for the first time, the Grammar School has been transplanted outside of it’s home.