Posted by SimonPoole on 5 March 2019 in English (English).

Yes, 10 years ago was the first documented public commit to Vespucci

This seems to have marked public availability including the wiki a couple of days later. 10 years is methusalem age for Android apps given that the first commercial Android device became available at the end of 2008, Naturally both functionality and code base has developed a lot since the beginnings.

In any case thank you to all the developers that have contributed, lots of them long before I became involved and special thanks to Marcus for his contributions and for continuing to provide the access to the google play store.

Back to current times, version 13 is nearly ready for a beta release that I expect in a couple of days.

Some of the highlights:

Vespucci will now render multipolygons, the standard style for this and some common area types is to have a thick border on the inside of the polygons similar to other editors. In principle it is possible to use a fill style, however particularly large multipolygons will typically have some non-downloaded members which will lead to rendering artifacts.

Turn-restrictions will be indicated with an icon near the via node or way.

The style configuration has been substantially revamped to allow cascading styles (and by that requiring less typing) and matching on arbitrary tags or tag combinations, further some previously hard wired constants are now exposed for configuration, for example the maximum zoom level at which icons are displayed. 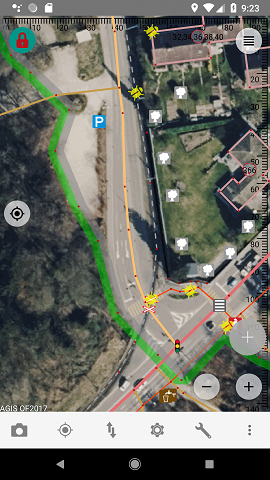 osmChange format files can now be applied to loaded data. This makes the functionality to save such files much more useful, for example potential problems can be inspected and fixed in the saved files and then re-applied without having to use JOSM.

MapSplit sources contain original OSM data in PBF format tiles. These files can be configured as read-only data sources and be used for editing on the go when there is no expectation of network coverage or there is only slow Internet connectivity available. While it was previously possible to simply load larger areas directly in to memory, this has a larger impact on performance that is avoided by being able to load data on demand.

Vespucci can now read OSM data from files in PBF format, the most popular binary format for OSM data.

Thanks for Vespucci! It is great for editing during survey, preferable to making many, many notes and later deciding to not spend my time on processing them :)