Posted by SimonPoole on 9 December 2018 in English (English).

The fist beta/test version of Vespucci 12.0 is now available from the play store (together with the monthly update for the current release, 11.2.3).

The current way (pre version 12 that is) of adding new objects with a long press goes back to the work done by Jan Shejbal during GSOC 2012 (a couple of years before I had anything to do with the project). This has the advantage that it doesn’t need an extra menu, you can inspect where you are placing the object before actually creating it, and in general that it is fast. The downside is that it can be a bit fiddly at times and users need to be told about it in advance and as we all know RTFM is not very popular.

Simple action mode replaces the long click action on the screen with a menu driven way of creating new objects. Long clicks are disabled as long as the mode is active.

Tapping the large green floating button will show a menu. After you’ve selected one of the items, you will be asked to tap the screen at the location where you want to create the object, pan and zoom continues to work if you need to adjust the map view.

The mode can be toggled on and off via an item in the main menu. See a comparision of the two modes for more information.,

MapRoulette tasks are now supported in the task overlay. While mostly MapRoulette tends to be revolve around aspects of mapping that can be done remotely, in line with the support for OSM Notes, Osmose bugs and custom tasks, it does seem to advantageous to be able to view and resolve such issues when you are actually on the ground at the location. 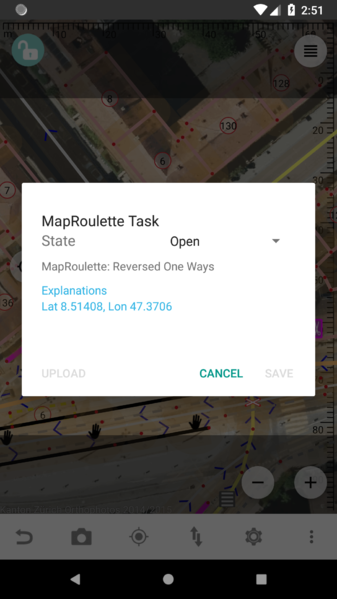 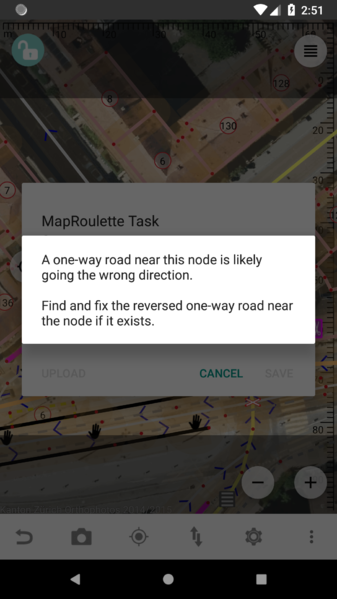 To be able to change a tasks status you will need to set you API key. If you have not set it, you will be asked on first upload, preferably you should set the key before making any changes via the “Tools” menu. This is a first cur at support, and may evolve over time.

Newly created OSM Notes that haven’t been uploaded yet can be moved by selecting the Note and then dragging. Behaviour for downloaded Notes remains unchanged.

Most recently used support for OSM keys, values and roles

This adds support for storing, retrieving and prioritized selection display of keys, values and roles that have been recently used. When possible the mru values are associated with a preset.

Persistent storage is provided by an XML format file (“mrutags.xml”) in the publicly accessible “Vespucci” directory on device. The contents of the file can be inspected, and for example used to indicate what is missing from the presets.

You now can, by using the “Provide feedback” function in the main menu, directly open a new issue on our github issue tracker with the most important information about your device and app version automatically included. If you have a github account you can simply login with that, if you don’t, you can submit an issue pseudo-anonymously with your OSM display name included. If you are using the later and haven’t yet authorized Vespucci with the OpenStreetMap API, you will be asked to do so.

The anonymous issue creation is only available in the official builds or if you are building the app yourself if you have configured a github personal access key during the build process.

And last, but not least …

Nice, thank you for your continuous work on Vespucci and these detailed changelogs, they really do help in learning how to efficiently use it !

i dont know why on this app have no a good features and map loading is too slow and stacks , anyway i will try that new version hope it changes

Hello, I would like to ask you about the localization of the application in Russian