We released Vespucci version 11.0 at the beginning of July, 2 months later, the first beta of 11.1 is now available on googles play store and from our github repository..

Before going in to some details on 11.1, a quick word on the plans for the rest of the year. I hope that we can limit the testing period of 11.1 to the month of September and release early October.

My current plan is that 11.2 will have no new features and will solely be a vehicle to deal with googles forced update policy (see https://github.com/MarcusWolschon/osmeditor4android/issues/773 too). This also implies that there will be no update/bug fix releases of 11.1 after November 1st, so get on with testing :-) and that the google play version of the app is very unlikely to support pre-Android 4.0 devices any more.

Version 12, if all goes well including some interesting UI changes, will become available early 2019 in time for Vespuccis 10th anniversary. Back to 11.1.

The internal representation of presets has been overhauled allowing us to implement some new features without adding to already very byzantine code. The major changes for users are:

The default preset has been reworked to work with the new features. The effect of these changes is in general a more compact representation of objects with a large number of check fields, the most notorious example the payment methods preset that currently has 34 check fields. In 11.0 that looked like this: 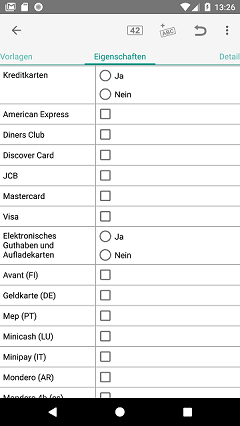 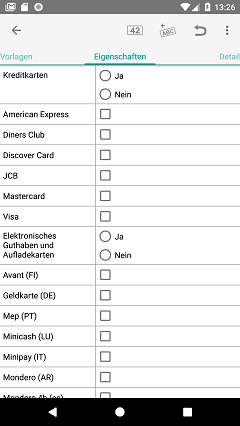 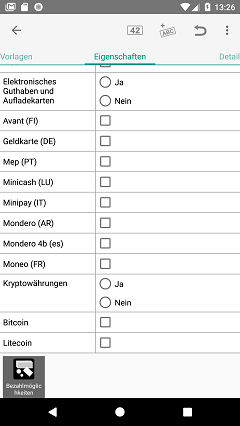 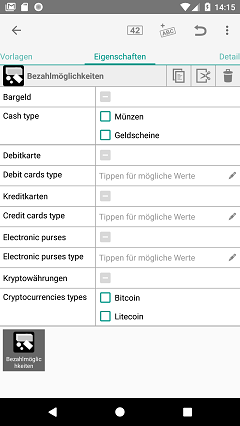 with individual check fields selected in a separate dialog: 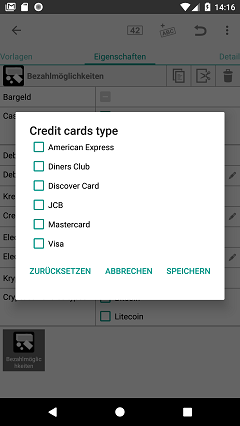 Readers that saw my, slightly gone wrong, talk on presets at SotM 2018 in Milan, will realize that this change plays a bit in to the observation that there is a clear trend to move tag values in to the tag key space. While I disagree with this, in the end we still need to provide mappers tools to deal with it.

Version 11.0 introduced “auto-presets”. These continue to be available but the online query needs to be explicitly started by tapping a button in the preset search result form. We’ve found that the performance of the feature varies so much across mobile networks that doing the query automatically was too confusing and annoying.

The corresponding preference to enable/disable the feature has been removed. There are some further improvements to this functionality that didn’t quite make it in to the first beta, but which will be included in the release.

Tag copying and pasting has been redone. New functionality includes:

The later functionality allows you to copy property data from a GeoJSON layer to OSM object, naturally this shouldn’t be misused).