This is a minor release mainly containing UI improvements. You can install the beta from the google play store (after enabling the “beta” releases setting), or obtain it from the Vespucci repository.

The opening hours editor (a separate project found here) has received a number of updates, including

Use of SAF file picker for Android KitKat and later

Previously, to give a consistent look and feel over as many different Android version as possible, we were using a third party file picker/selector for those operations that require a file to be selected for input or output. Unluckily in recent Android versions removable “SD card” storage has become unavailable to the third party library which is rather annoying as this is the location where you typically want to save larger files.

To work around this we are now using the system SAF (Storage Access Framework) file picker for Android KitKat (19) and later, in older Android version the third party file picker should work fine. Using the SAF file picker does have the additional advantage that cloud-based storage location are usable for operations that don’t need direct file access, so you can save and load files from your favourite cloud storage provider if you want to. 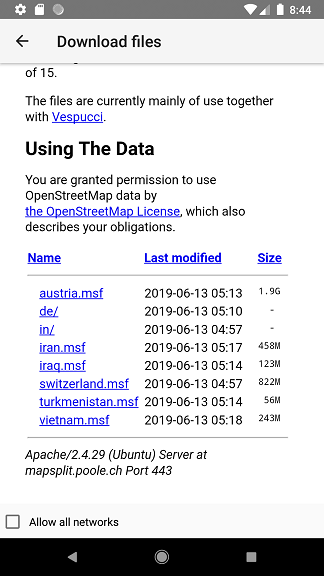 To make using offline OSM data in MSF format easier I’ve added a small UI that will display the available files from mapsplit.poole.ch, download them with the Android download manager and configure a new API entry if necessary.

Yes, I know we should be using lavish amounts of corporate newspeak to generate “excitement” among the more gullible here, but frankly I can’t be bothered. We’ve mentioned the work on complete offline support more than enough as is.

Support for multi-line comments and source in the upload dialog, and multi-line text fields in the form tag editing UI

Comment and source field are now multi-line making adding longer texts far easier. Further multi-line input fields are supported in the form based tag editor, depending on the “length” attribute in the presets.

The layout of the JS console has been improved and scripts from preset fields are now evaluated after all fields have been set, allowing for order independent consistent behaviour. Further the key - preset mapping is now visible to scripts.

GPX and GeoJson files can be loaded via Intent

Clicking a GPS or GeoJson/Json file in a file manager should now show Vespucci as an app that can read the files.

The “GPS” menu now features an item “Go to coordinates” that will display an input field that will accept coordinates in a wide range of formats and Open Location Codes. Further, the element information dialog will display the OLC equivalent of the coordinates for Nodes.

We do make an attempt to resolve shortened OLC codes, but this requires network connectivity and is not guaranteed to give the same results as a google based implementation or even remain stable over time.