Two years ago I produced some statistics on addresses in OSM. While I did regularly re-run the scripts, I never really revisted the topic to see how things are developing, 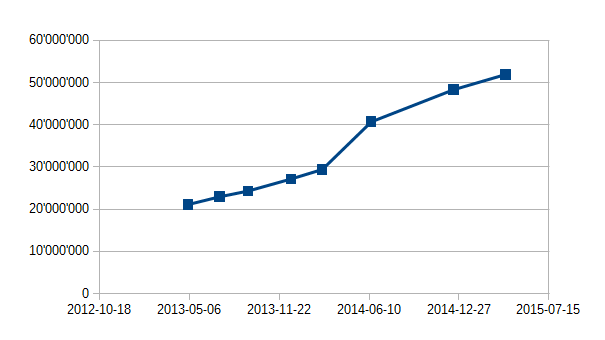 The complete set of numbers can be found [here] (http://qa.poole.ch/addresses/), According to official statistics there are 18.5 million residential buildings in Germany so I would expect that we are roughly 1/3 to 1/2 of the way to complete coverage there.

The large global increase in early 2014 is mainly due to the import of 8.7 million addresses in the Netherlands which due to peculiarities in building and numbering in NL led to a far larger increase in the counts than you would normally expect of a country with a similar population size.

When I first produced the address stats the openaddresses.io project didn’t exist and it it is now interesting to compare the two projects. It should be noted at this point that openaddresses.io does not make any representations wrt licences of their individual datasets and there is no guarantee that all or any of the data could actually be used in OSM.

OA currently claims to contain 115 million address, slightly more than twice the 52 million in OSM. However how large is the overlap? A very rough (and unfair) estimate based on the numbers for the US, ES, NL, PL, DK, NO and JP in OSM, would indicate that 24 million address likely turn up in both projects, but, more interesting that OSM contains 28 million addresses not in OA. Or put differently a combined dataset would contain 143 million addresses (see caveat above).

Given that there are 113 million residential buildings alone in the US, we’ve got a huge uphill battle to get addressing worked out, especially since 99% of the current US address are from about 10-15 large imports.

I’m not quite sure why it would be an “uphill” battle given that it tends to become easier with more data.

True it is a lot of work, but as Germany shows (roughly 1/4 the population and 1/5 or so of the addresses) it can be done in a reasonable time frame even when the majority of addresses are not imported. Given the wealth of PD data in the states, it should be a no-brainer (the data can be used as reference even if it is not imported directly).

I think we have more than “1/3 to 1/2” of all addresses in Germany mapped yet. There a lots of buildings without a house number (even in the official cadastre). These adjacent building (“Nebengebäude”) like garages or barns often are located on the same parcel and that’s why they do not have an own housenumber.

according to some dataset i have here there should be something like 19.6-20MIo Adresses in Germany. I have 20.6 Mio but i know there are approx. 5% faulty/non existant addresses in there. I occasionally do regional compares against that Dataset.

So i guess we are at 2/5th of the Adresses done in Germany. That number sounds high but most of them are in very dense Urban Areas. The rural Germany is not that well covered.

My guess is that Citys like Hamburg, Berlin, Munich e.g. Citys above 3-400K residents are mostly done.

in Germany, at end of 2013 we had 21.24 Mio Addresses, according to a slide from adv-online.de, which i got last October at Intergeo.

Unfortunately, my request to take this slide for public use was ignored, so i can only tell this absolute number (i have the numbers for all german states).