Recently I stumbled upon some large areas that where mapped as forest, but Bing aerial imagery showed just a bleak, empty space. I was irritated first, shocked right after - having some thoughts about the earth climate in mind. Only some time later recognized: “Ok, wait. What do you think where your furniture comes from? This kind of thing has to happen. These are actually reneable resources.” 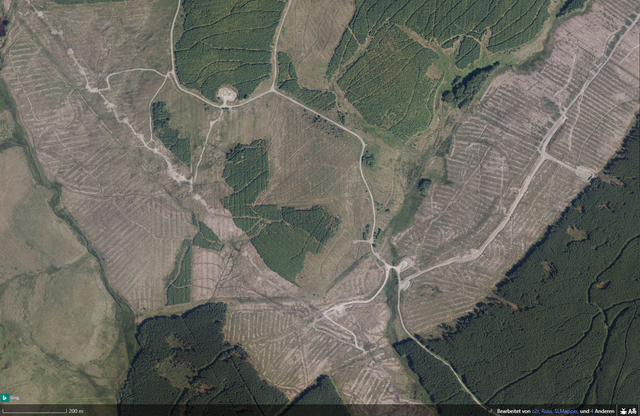 So with less shock I went ahead to look around. I wanted to make sure that the imagery I was looking at, really was the latest one. The empty area and the visual progression between the different images already told a certain story. When zooming close into the Bing imagery, you could see the cut off stumps and occasionally even some stapled wood. 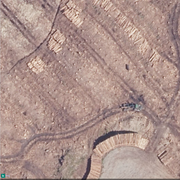 I tried to find dates for the different aerial imagery and also checked if there were any street level photos nearby. The Mapillary images I found were partially helpful. They were dated to October 2019 and there the stumps were also visible.

Bing material information did not show any dates for Bing, neither did Esri Clarity. But for Esri it mostly showed 22. Mai 2010, but partially 3. Mai 2017. You can clearly see the difference between existing trees in 2010 and cut off trees in 2017. 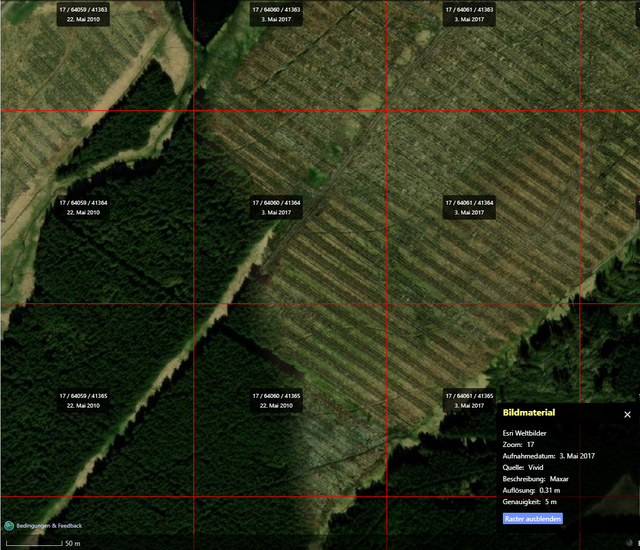 More to the south the Esri imagary was even from 2021, and there more cut off can be seen, which is not yet visible in Bing imagery (and also not yet mapped). 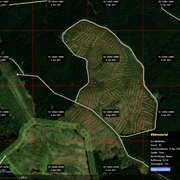 While it was interesting to analyze the imagery, my agenda with osm was a different one - to enhance the map. So for everybody waiting for the editing part, here you go. Let me jump into how I experinaced it and explain more considerations on the go.

My first thoughts were: hey there are no trees. If it is mapped as a forest, this is wrong. Double checking the wiki: ok mainly no trees, which means e.g. a clearing can still be part of the forest. But imho not a whole section that is gone.

Next question: what actually is a forest. I know the discussion between landuse=forest and natural=wood, but that’s not what I was after. Rather: is it a larger, defined (maybe named) area of wood or can it be also parts of it (like a compound) or any (visual) collection of wood? - also answered in the wiki: Actually it could be any collection of (managed) wood, because for the defined/named parts there is boundary=forest (not often used) and boundary=forest_compartment.

Ok, so let’s go: Deleting all the wrongly tagged forests … … … I recognized soon that often I could not just delete them, because they where stretching partially over tree covered and no longer tree covered areas.

Only later I thought about if it was a good idea to completely delete these areas, as the geometry might have been interesting for nowerdays use as well, even when it is no longer covered with trees. However also I did not find an approriate tag for cut down wood. Maybe you can give your inputs / advice on this.

How did I deal with the overlapping geometry?

How did I do the split in iD editor? In case you know an easier way please let me know

Now coming to the point why this blog post is called “wood rotation” and not “deforestation”: When comparing different aerial imagery, to my surprise I found that in some areas, where nothing was visible on an imagery I rated older, in the newer imagery there were some green areas visible. First it made me overthink my hypotesis of image age. But soon I recognized that these had to be newly grown trees. 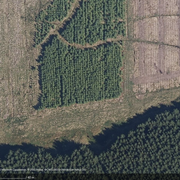 After understanding this it was pretty well visible by the form of the tree rows, that this trees had been artifically planeted to re-grow the forest (reforestation). So I looked for a matching tag and started mapping these (formerly unmapped) areas with landuse=plant_nursery. Small amount of them had existing mapping with natural=scrub which partially I kept where trees did not seem to be placed in structured rows, or changed otherwise.

Here are my changesets:

You may want to mention that I have never been at this place nor asked people who have been there. That is correct. However I think that after the amount of considerations I did, I could be certain enough to do the mentioned updates. Of course I could have asked people earlier about their opinion, but while recognizing this in the middle-off I thought that I will just continue the changes with the most carefulness I can and hope that the positive aspects will predominate any potential negative ones.

In case you have more up to date information I would love to get in contact with you. As you might have seen there are more areas of tree rotation around that are awaiting to be mapped … 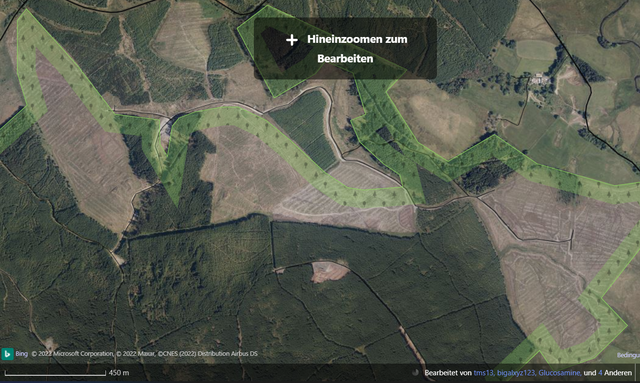 Even when I saw reforestation, I saw much more deforestation, which still makes me feel uncomfortable. If you want to influence the climate in a positive way, plant a tree :-)

To summarize, mapping this was very interesting and eye opening. I learned something about

It’s quite likely that the recently felled areas will either not be re-planted or planted with a rather different mix of species.

There has been discussion in various places about how to tag felled areas of forestry plantation (also relevant to burnt forests in less damp places than S. Scotland), but probably the tag which is used most widely is man_made=clearcut. It really helps if one can estimate when the forest was cut as they might scrub up, or regenerate (unlikely for UK conifer plantations) and this helps keep these areas under review.