Posted by Richard on 7 October 2018 in English (English).

Well, you know, it’s been a while since I wrote an OSM editor and I found myself missing the experience.[1]

We’ve pretty much reached the apotheosis of the traditional OSM editor workflow. There isn’t any point building another iD, because iD is terrific and does everything that needs to be done. There might be some merit in building a new native power editor for macOS, say, but even that would be a marginal gain and the sort of project best attempted by a company which employs dozens of mappers.

But we certainly haven’t reached the limit of OSM editing. The traditional workflow was never designed for integrating third-party datasets, for working with street-level imagery, for surveying on a smartphone, for QA. These activities were unheard of in 2006 when JOSM and Potlatch 1 were first conceived, but are big parts of today’s OSM data landscape.

So we should be experimenting with different editor experiences, to see if we can attract wider contributions through presenting an alternative workflow/UI. 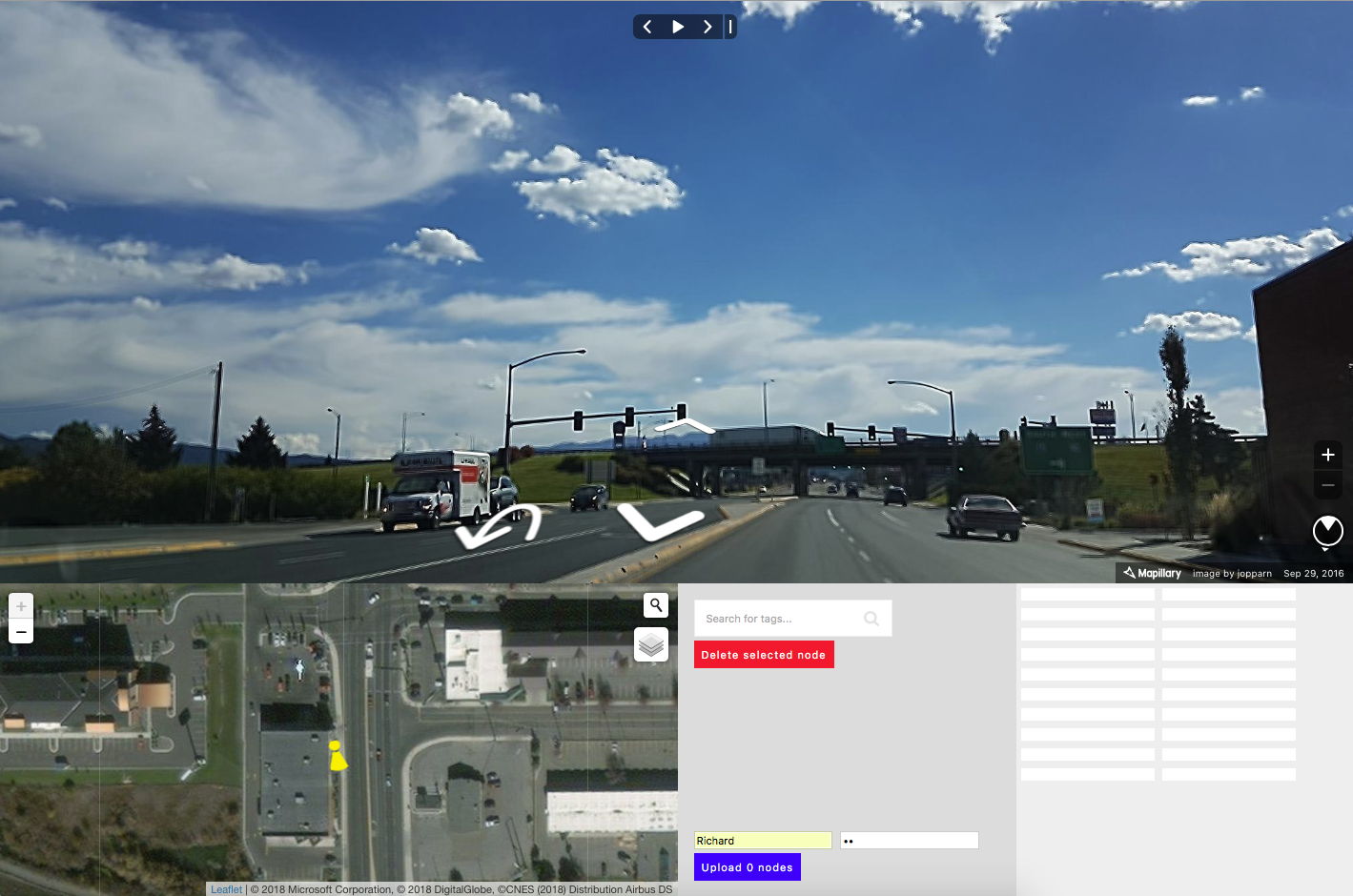 Deriviste is a POC for a big-screen street-level editor. POC may equally stand for “proof of concept” or “piece of crap” given that it’s really just 300 lines of Javascript I knocked up over a day.

The idea is that the Mapillary street-view takes centre stage, and you can add POIs by just double-clicking on the imagery. My initial use case was small towns in the rural US that are less likely to get an editing community any time soon, but which might get drive-by street-cammers recording imagery that can be used to map POIs.

It isn’t really an editor, in that you can’t read and modify anything, only write. There’s no dupe detection, the presets are a very simple hack on the iD .json file, and it suffers a little from Mapillary JS’s capriciousness (sometimes it’ll find a lat/lon from clicking on the imagery, sometimes it… won’t). It’s a POC. I don’t have any great ambitions for developing it into something world-beating, but you’re welcome to have a play, and if you like, send patches!

We could use Mapillary deltas to generate the eaves of buildings that are otherwise impossible to see on satellite imagery. I imagine the lower right table is for cropping, saving, and mapping your favorite Mapillary image of a building facade to a texture database.

great work! few suggestions: add more layers (having Public Transport helps if you are mapping bus stops); in areas with a lot of imagery, its almost impossible to see the map (yes i know we can turn off the mapillary layer), but maybe decreasing the size of photo location on the map would help; mention that you should zoom in if you want to map, lets say a waste basket, so that the georreference will be improved instead of having the photo as taken and having less accuracy.

Awesome tool that can help improve armchair mapping a lot. Keep up the great job

I think there could definitely be a user base for a street-level imagery focused editor. The feature wish list needs to be worked out though.

For one, I think the Mapillary filters would be really important. Can I limit to just my images shown on the map, just images from the last month (or both those filters at once). Then it would be amazing if I can see on the map the filtered out Mapillary (i.e. there are photos here, but they don’t meet your requirements).

Pressing up & down arrows on my keyboard progresses the photos, which is handy.

Oh, and changeset tags could include a source:mapillary_id=… auto-filled or things like that, maybe survey:date too.

Great suggestions LivingWithDragons. Richard this idea to mention the source and survey date is already being done on Pic4review. I’m sure it can be cloned and adapted to your amazing editor. Keep up the good work