What does the path say?

Posted by Richard on 7 November 2013 in English (English). 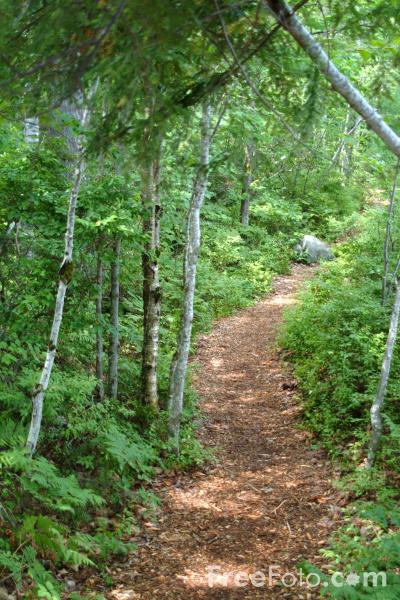 BUT WHAT DOES THE PATH SAY?

Like the moo of a cow, everyone knows what a highway=cycleway means. Yes, there are variations. Lots of them. But in the absence of any other supporting information (like a surface tag), you can make an assumption that the above pic probably won’t be too far wrong.

But just like no-one has heard a fox, no-one knows what a highway=path means. It could be anything.

So if you are using highway=path because “it makes it easier for data consumers”, it doesn’t. It makes it a pain in the arse for data consumers. Right now I am consuming data for a cycling router and highway=path is the bane of my life. When I see “highway=cycleway” it’s a safe bet I can route a bike down there, whereas when I see “highway=path; bicycle=yes” then maybe a bike might want to go there, or maybe it’s a steep drop over a precipice with a rocky surface but, by some quirk of arcane legislation, bikes are allowed.

And then we’ll actually know what the path says.

And by “some quirk of arcane legislation”, many countries have a right to cycle just about everywhere. its just England and Wales with arcane restrictions.

That’s absolutely it. highway=cycleway tells you it goes “whoosh” and you can cycle on it; it works in E&W and elsewhere. highway=path and an access tag doesn’t tell you it goes whoosh in any country.

So should highway=cycleway only be used for smooth/paved paths you can cycle along?

It is currently also used for mountain bike trails with rocks, mud and steep drops etc.

That’s the point here. highway=cycleway has implicit meaning; look at 90% of cycleway usage in OSM and it means more or less the same thing. But if you want to overrule that implicit meaning, you can do so.

highway=path doesn’t have implicit meaning, other than “here is a path of indeterminate construction”. Unless you supply the meaning with both access and surface/tracktype tags, it’s pretty much useless.

highway=path is not a road or a footway created by someone, but just a way were many people walk (or many bikes ride, or whatever), so the grass stopped to grow there, or the dust became more compacted and the way became visible. So the surface is supposed to be ground (at least by default).

@Diomas: No, highway=path has nothing to do with “informal” paths - use informal=yes for that. The “path” value can be used for for basically all sub-car highways. Based on the original definition of higway=path, you could technically replace all highway=footway/cycleway/bridleway with highway=path (although the article explains why this might not be a good idea).

highway=path was a stupid, completely pointless invention that has served to make the data less useful, not more.

Richard, thanks for introducing me to “Ylvis”, whom I otherwise wouldn’t have got to know ;) Funny and creative post! As you may know SomeoneElse gave me the pointer to your blog.

Substantiallly from a 2015 perspective I do not agree completely with your point of view.

As dieterdreist stated here “While duck tagging works very good within the same culture and region, it bears at the same time the risk that mappers in different regions have different assumptions of what is implied by certain words. “

On first sight, descriptive keys like footway or cycleway seem to give a clear indication of the type of a path. Actually globally that’s only true, if you provide - in addition to the highway tag - other decent attributes, like surface, width, smoothness, incline, access restrictions etc. So either way an almost equal number of tags are usually required to describe a way equivalent. So to my impression duck tagging might not be that intuitive and naturally for others than for you. Non-native English mappers (like me), may have different assumptions of what is semantically implied or what is usable according to their region.

I wonder how much of the path/footway controversy is due to regional issues. Here in the US, footway isn’t a very meaningful term. Governments here don’t build paths and say, “this is a footway.” They generally build paths and make them available to whoever wants to use them. Sometimes they ban bicycles from those paths, in which case we use bicycle=no. To me, the 2nd and 4th pictures in the examples are called “paths” or “trails” in common parlance. I wouldn’t call them a footway or footpath in conversation. There’s nothing special that makes them more for pedestrians than other non-motorized modes.

As for bridleway, the only ways I’ve ever seen in the US which qualify are sections of trail which run parallel to a path or cycleway, for the purpose of separating traffic. I’ve never seen a stand-alone bridleway here, and Taginfo confirms that it is relatively sparse usage outside of Europe.

It’s generally agreed-upon by most that a “path” is a non-motorized way. Richard, your contention is that there’s less information in highway=path. To me, that’s a good thing. Too much information, when inaccurate, is just as bad as too little. Without the path tag, mappers are forced to shoehorn a path into a footway, cycleway, or bridleway, adding information that they don’t actually have. Sometimes (or most often, in my experience) a path is just a path.

You seem to be asking why we need path when we have footway, cycleway, and bridleway. I think the question should be: why do we need footway when we have path? Cycleway makes sense, because some ways are clearly and verifiably intended for bicycles first: they have dividing lines, or special signals, or painted symbols like in your first picture. What makes a footway clearly and verifiably intended for foot traffic over all other modes? Perhaps the presence of obstacles, like power poles, mailboxes, bus shelters, etc. which would make cycling undesirable on that way? Otherwise, at least in the US, walking is implied on any way except motorways, or where otherwise tagged.

Nor should signage and restrictions alone constitute a footway. That would be redundant with the access key. The highway key is about the way itself. A motorway isn’t just a motor-only road; it has a meaning beyond that.

No, the great problem I see is trying to push too much meaning into the highway key. We should be encouraging greater objective detail by using the other keys we have, like smoothness, surface, and access, not trying to fit all the information into a single key like highway. I think you’re on the right track (path?) in your last two paragraphs: we should encourage more detail. I just don’t think ideas like Duck Tagging or “whoosh/splush/plod” encourage that detail to be added, and I don’t think using footway/cycleway/bridleway necessitates that detail any less than path does. Vclaw has a nice example in the mountain bike trails: they go “whoosh” for a mountain biker, maybe, but “plod” on a road bike.

This is the typical situation where one extrapolates from the local situation to presumed worldwide implications. IMHO we should always add surface tags to highways, as it removes uncertainty. Here 3 examples from my local area that illustrate how the legal, signposted reality does not meet with central European expectations: 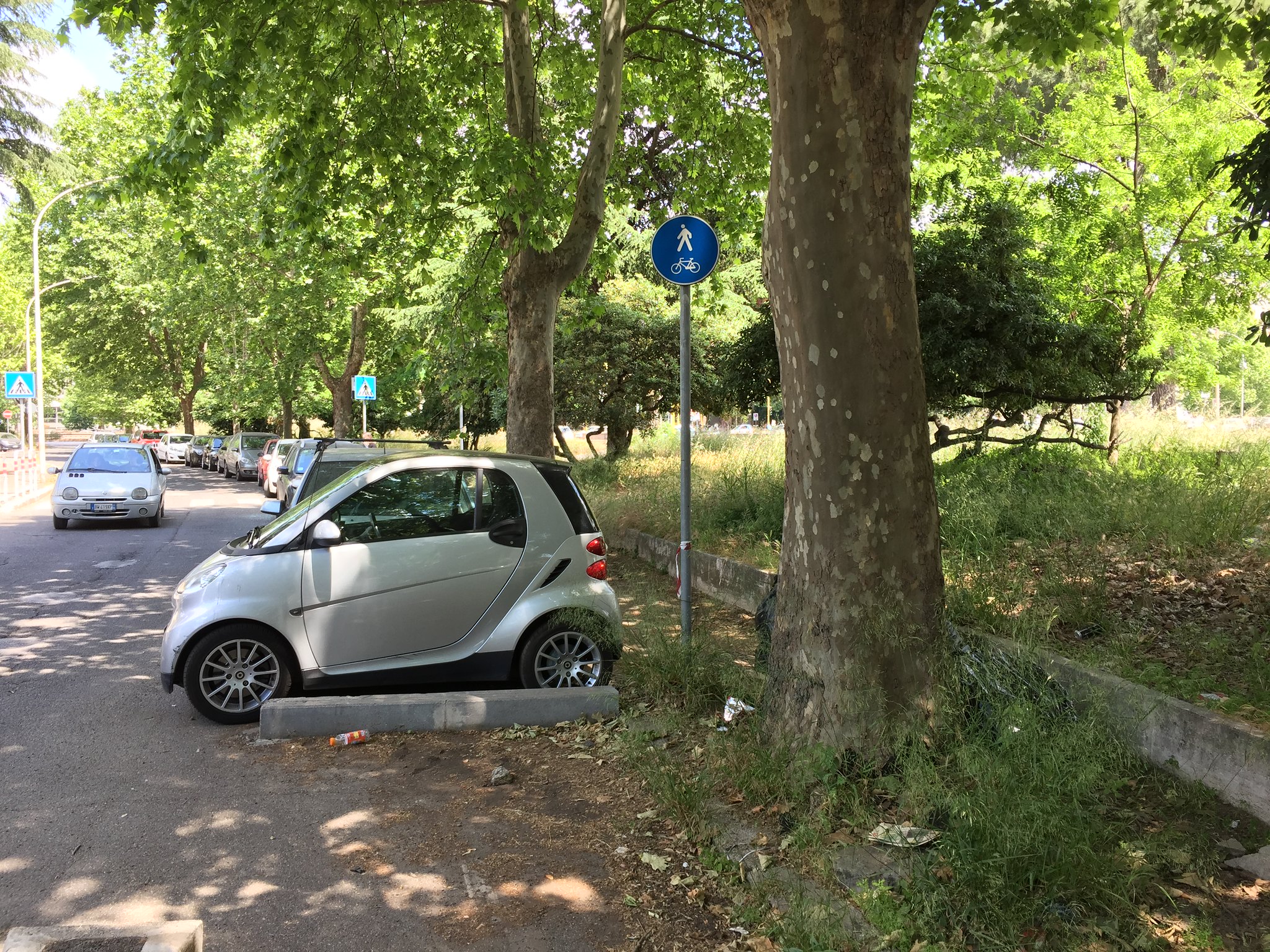 pedestrian area - with some “exceptions” 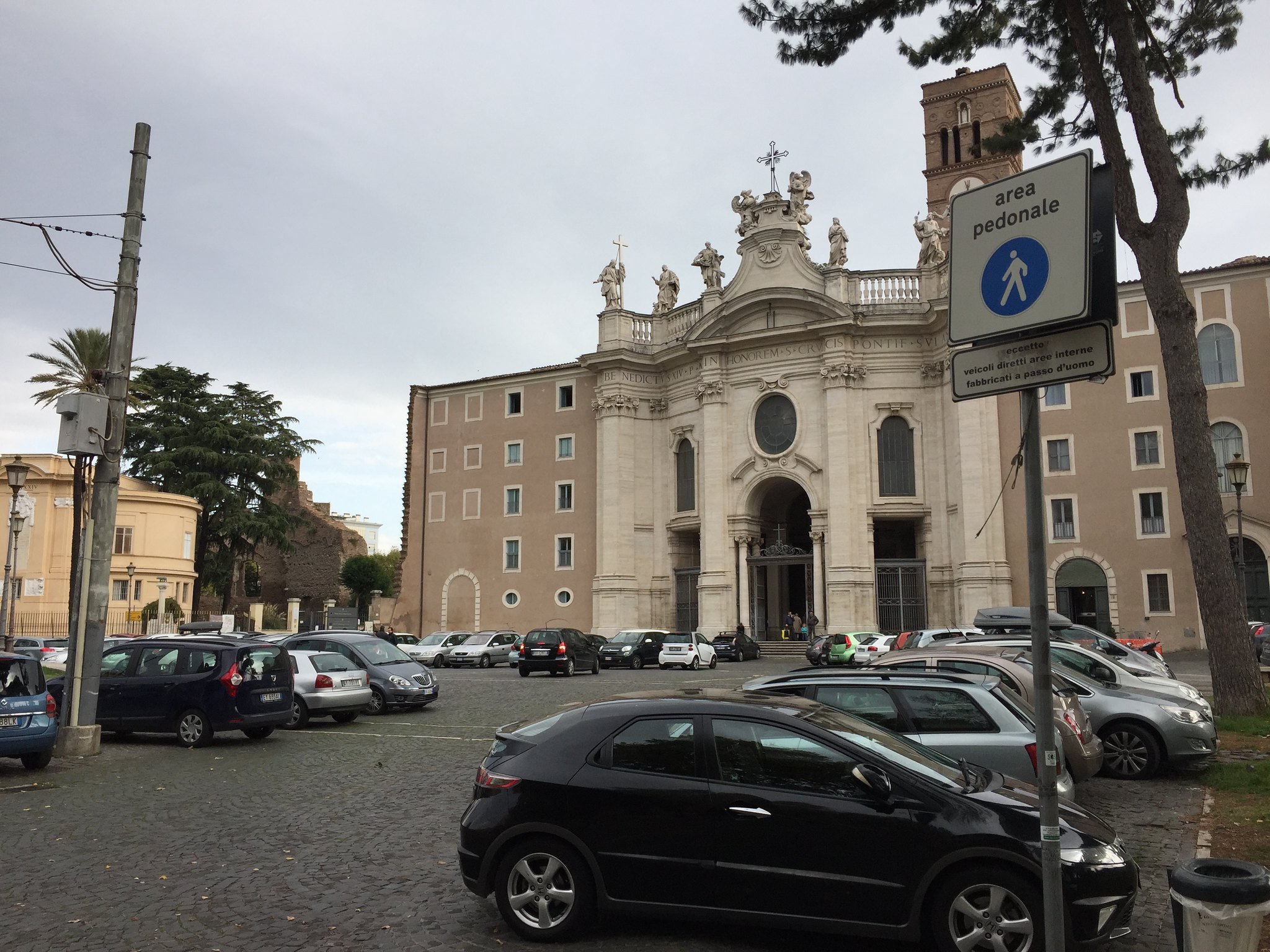 cycleway with some obstacles - whooosh

another “whoosh” in Italian: 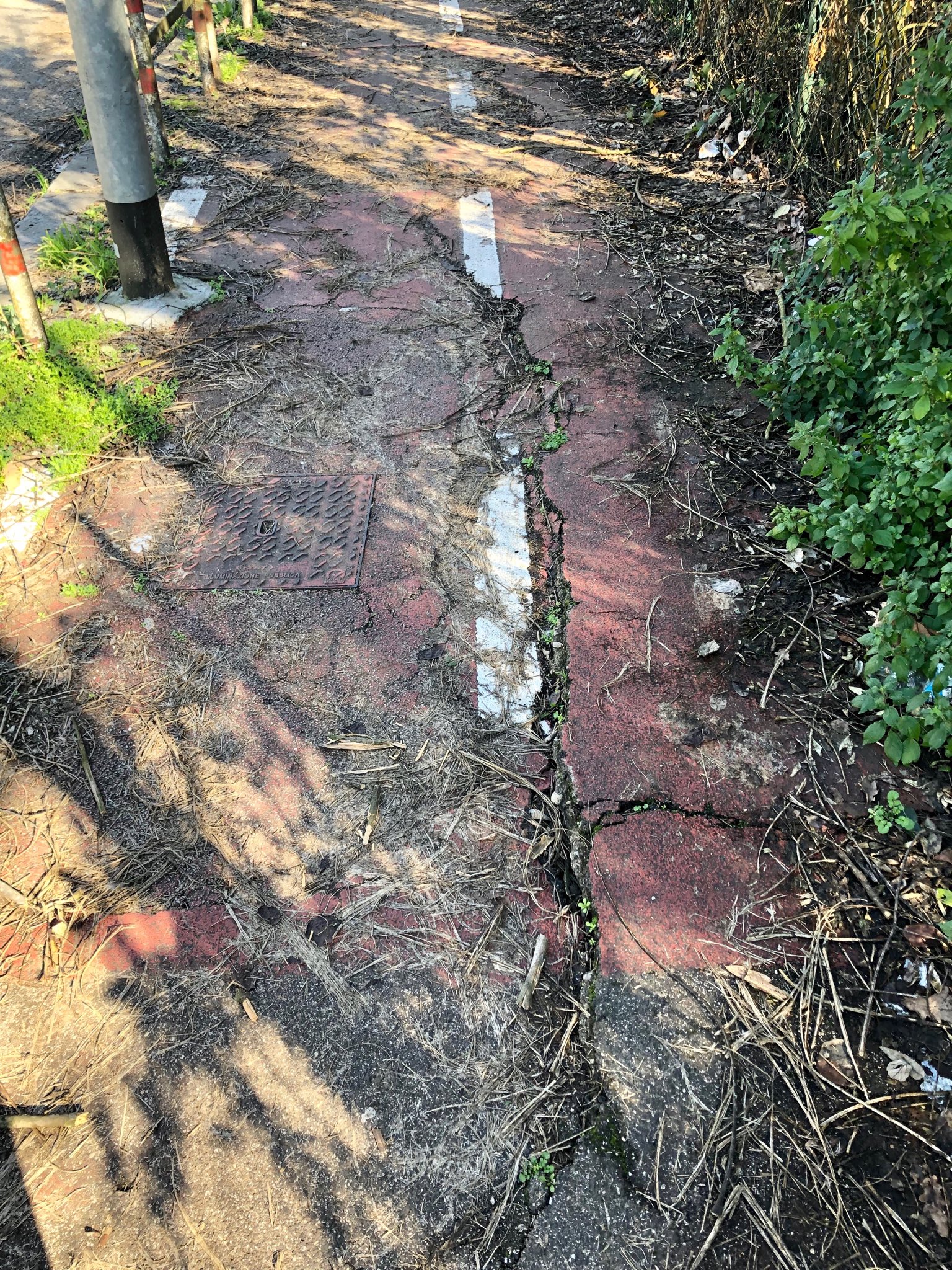 Really old diary entry but I feel like responding anyway. For background, my focus is on hiking and rendering maps suitable for use by hikers.

To me the distinction between footway and path is about the same as between, say, highway=residential and highway=track. With a footway I make the assumption that it is smooth surfaced and requires no special equipment, I can walk it using my dress shoes if I feel like it. It is probably suitable for pushing a child stroller and maybe even with a wheel chair (though curbs might be an issue). With highway=path I make the assumption that it is unpaved, has a rough surface and probably narrow: I probably need shoes with soles that provide good traction and maybe ankle support.

With regard to your 2013 question of is a way tagged with highway=path, bike=yes suitable for bicycling, in my area the answer it that it is only suitable for use with a mountain bike and if the mapper has the ability to judge it, it should also be tagged with mtb:scale. I would exclude it from consideration for use with a road bike.

I am not a mountain biker so I am not able to judge what the mtb:scale should be on a trail but I can see the signs posted at the trail junctions and see whether bikes are allowed or not. So I will be one of your villains, tagging some trails with highway=path, bike=yes.

@n76 You’re welcome to do so, but bear in mind that an MTB trail tagged simply with ‘highway=path, bicycle=yes’ is completely indistinguishable (to routers and other clients) from the thousands of km of French voie verte already tagged that way - even though the cycling experience is very, very different.

@Richard I just searched for what a voie verte is. Looks like you have the same type of problem in France with that as we have in the western United States with trails open to mountain biking. Probably several thousand km as well though I haven’t searched that to establish a number.

In both cases available tagging was pressed into duty where it was not an exact fit. The results being that quite different features now share the same tagging.

I’d suggest that new tagging be developed for both the voie verte and our local mountain bike trails. But the only way I know to do that it on the tagging email lists which, in my opinion, are nothing but a bike shedding echo sphere.

In the meantime, I maybe I could take a guess at the appropriate mtb:scale for the trails local to me. At least that would give a renderer a hint that the trail wasn’t a voie verte.