Analysis of usage of similar tags over time

Recently, a new tool was created by Martin Raifer (@tyrasd) to generate graphs of the usage of tags over time. This is a great tool that gives us more insight in what drives the choice of tags by mappers. In this diary, I compare the usage of some related tags. We can see that amenity=public_building was added to the map features page wiki in March 2006, before it even was used once in the wild. The tag started being used later that year, and usage increased rapidly from there on. No increase in usage could be detected when JOSM or Potlatch added support for the tag. Growth in usage slowed down in 2013, and in 2014 even a decrease started. I wonder if anybody has a hypothesis for the cause of this decrease.

office=government was added to the wiki in May 2010, when two objects were tagged as such. After the features was documented on the wiki, usage immediately increased. The tag office=administrative was added to the wiki in September 2011, when about 180 objects with this tag were in use. The increase of the usage of office=government and office=administrative sped up when iD added support in October 2013. Usage for both tags was around 15 shops until voting and documentation started. Potlatch 2 added a preset for seafood despite fishmonger winning a vote. When Potlatch 2 added the preset, the tagging of seafood strongly increased (despite the vote and documentation supporting fishmonger). When JOSM added seafood half a year later, usage of this tag rapidly grew too, causing two similar tags to exist in parallel. A deprecation warning for fishmonger on the wiki had little effect. In 2013, iD added fishmonger, but moved to seafood a year later. When iD moved to fishmonger, the number of newly tagged fishmongers dropped rapidly, and later even the total number of fishmongers decreased, allowing seafood to become significantly more popular. When JOSM added a deprecation warning for fishmonger, the drop intensified.

This is a clear case where the choice of tag is driven by the editor of the user (see the increase of seafood and fishmonger when Potlatch 2 and JOSM added their preset). When documentation started in 2009, amenity and leisure had both about 100 instances. This slowly increased until in 2011, suddenly the use of amenity exploded. It is not clear to me why, does anybody have an explanation? After a vote for leisure, a change of the wiki and a deprecation warning in JOSM, usage of amenity decreased. Initially the plural was more popular. However, the singular started being used more and more when a wiki page was created and when JOSM added support for the singular, overtaking the plural in 2011. A mechanical edit in 2014 removed the remaining tags. When documentation started in 2013, about 400 shops of each type were created. Increase of both tags was about equal, until bookmaker was approved by a vote, the wiki was adapted, and iD added a preset for bookmaker. Then the use of bookmaker exploded, but since these three events were so close in time, it cannot be determined which of them was responsible for this. Usage of the tag grew rapidly after iD and JOSM support was added.

For those who want to run their own analysis, the tool can be found at http://taghistory.raifer.tech/, and the source at https://github.com/tyrasd/taghistory.

That’s just super-cool thing. Here is the comparison of tags from old and new leaf property schemes, clearly demonstrating that argument about re-tagging being a bad idea is wrong: But if there were people who can’t read, it’s a separate issue from changing old scheme into a new one. They are equally capable of adding any other wrong tags.

My point here is that there were traditional arguments like “new scheme is too complicated”, “nobody will use that”, and so on.

simple great tool, would have helped a lot during the discussion about name_1: 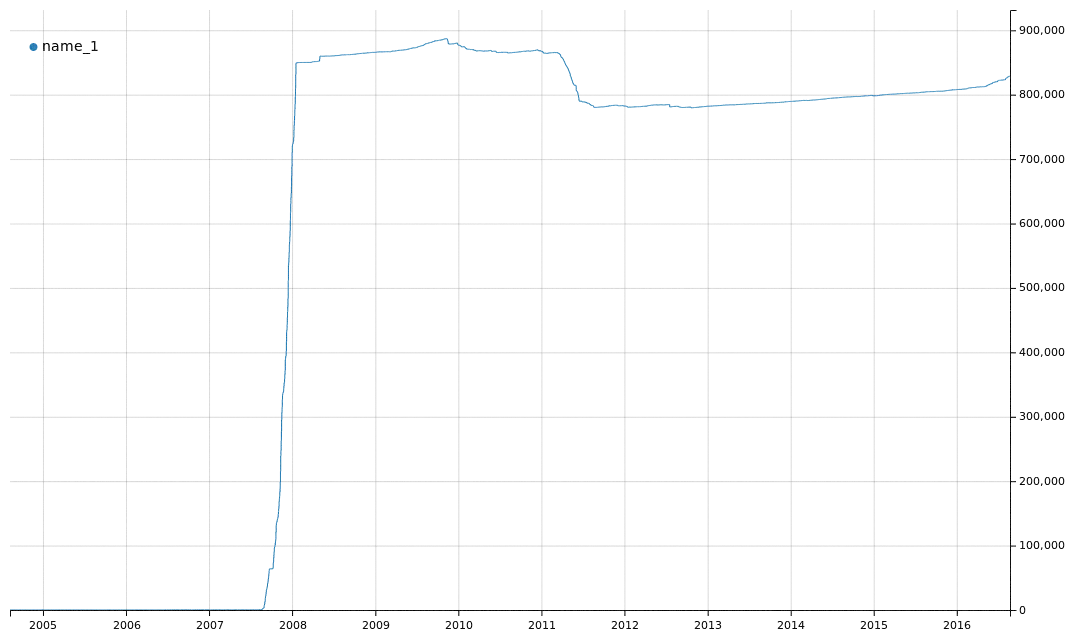