Posted by Komяpa on 1 December 2017 in English (English).

OpenStreetMap.org tile rendering operates on edge of its capacity. It’s possible to get more from already existing cluster if rendering queue is not continuously dropped, but instead is preserved and processed during low load hours.

Ttile.OpenStreetMap.org uses mod_tile and renderd to manage rendering queue. mod_tile is currently a core ecosystem project lacking an active maintainer for years. There are currently 19 Pull Requests that nobody merges.

I tweaked values in source code to allow for a longer queue. Pull request is available at https://github.com/openstreetmap/mod_tile/pull/152. In comments there was a proposal to make it a configurable parameter.

I offer 50 USD to person who manages to:

This should make the map browsing experience better for everyone.

Republic of Belarus is now covered with forests.

Used:
1. Some weeks of Komzpa's time
2. JOSM as Teh Editor
3. Yahoo! satellite imagery, which is Landsat on the most of Belarus (but in a good palette for foresting ;)
4. TWMS on localhost as Yahoo WMS data source.
5. Fuzzer JOSM plugin by Upliner (on OSM wiki here, needs some updating)
6. fuzzyselect, a python part of Fuzzer plugin.

Mew to all teh uzers. Enjoy!

On Tuesday, 16th of March, Ihar Mahaniok sent an invitation to mapmaker-belarus google group to come to Google Mapping Party in Minsk on 19th of March. OSM BY team looked into this invitation, and finally an idea was thrown on IRC-channel: let's go and tell them about OSM!

A group of volounteers (Komzpa, timerov, andrewsh, Haryaalcar) started preparation process. Hind, a cat from Moscow, helped us with T-Shirts designs. Various other people, including Blackadder, helped me with my presentation.
Thus, on March 19th 18:00 our group entered the GMM-MP room. What did we see? A lot of computers with old 17" CRT displays, with Chrome opened. The whole envionment seemed to be made to limit people's ability to communicate and socialize - "sit straight and map".

After listening to wonderful Ekaterina's speech ("that's cool! let's change teh world! you map, we show!") Ihar gave a master-class on using mapmaker. After showing how to add a POI to misplaced building of place the event was held (wordplay: IT&telecom centre - Центр Информационных Ресурсов и Коммуникаций - ЦИРК - circus) (compare: http://tools.geofabrik.de/mc/?mt0=mapnik&mt1=googlemapmaker&lon=27.55132&lat=53.90163&zoom=18) and showing how to edit other cities (my beloved Cherven: http://tools.geofabrik.de/mc/?mt0=mapnik&mt1=googlemapmaker&lon=28.40447&lat=53.71553&zoom=13), where no hirez data was available (unfortunately ;), he said the keyword "Questions?".

Timerov started in an interesting way: "Can some more about what mapping party is be told?". Ihar answered, that mapping party is the event when google mapmakers go to place with computers and broadband internet. "Can we add a bit about the history of mapping parties?" - "What?" - "May we show it on projector?" - "Yes, if not long".

My turn. Go to their projector, download my PDF, open it. Start from 2006, Isle of Wight. No interested faces. Barbecue... hey, really changed audience! Traces and photos from previous micro-mapping-parties in Minsk... Google guys change in face, and I start to strip-tease, showing my OSM t-shirt :) Photogrammetry finishes my presentation.

Continue questions to GMM. "How can we use them in GPS?" - "Afaik, no way of doing this".

Seems some mapmaker guys thought I work for google. They asked me questions about GMM! I was carefully showing them how to do that on OSM.

A guy from wikipedia asked if OSM is wikipedia-compatible. He liked the "yes" answer :)

Speaking to others was hard. "We're not mappers, we're just students" - a number of people was gained not because they liked mapmaker or accepted invitation, but just because their teachers told them to come. I remind, everything's held in Belarusian State University.

30 leaflets went away in minutes. Used projector a lot to show alpha-stage features of http://latlon.org/ - people liked 3D mapsurfer.net houses :)
Me: "Ihar, how can I map some grass?" - "Isn't it in types?" - "It's not" - "Can't be! Look a bit more!". Then he scrolled the list for a minute and finally answered: "Unfortunately you can't add grass to mapmaker for now." 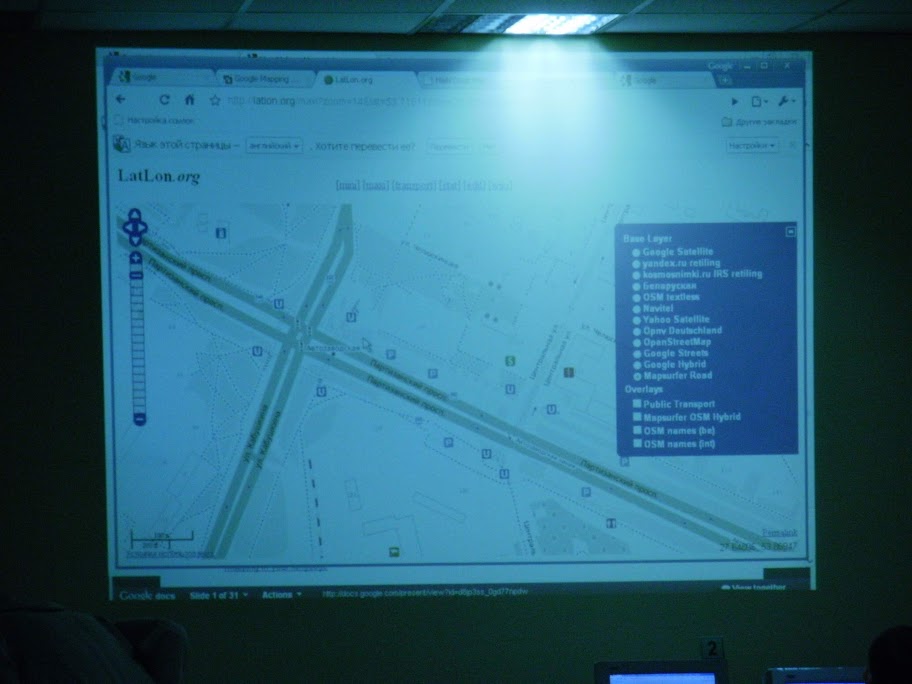 After all, they gave everyone a mapmaker t-shirt and invited to a group photo. OSM Team was in OSM black ones (Thanks Hind!), mapmakers - in blue. Then they gave everyone diplomas (yeah, I'm trined mapmaker with 3 edits there!) and special ones to most successful moderators, me ("to the mos socializin guy here") and andrewsh ("the guy who asked most of the questions" ;) Special diplomas had 4gb pqi USB Flashes as attachments.

Finally, while leaving (OSM Team was one of the last), we were given 3 pizzas and 5 bottles of water - "anyway we don't know what to do with it". So we went to the park, ate it all, and returned home, making photos of everything we've seen. Gotta map!

PS: Thanks google for a really nice day and for attracting people's attention to map-making topic!

Thanks to http://www.mapsurfer.net, Google Maps Mutator is now beta, with new features!

How to enable Google Maps Mutator

Open your /etc/hosts file with text editor and add this line (for windows - c:\windows\system32\drivers\etc\hosts):

How to change Google Maps to OSM globally

Tired of all those sites, showing Google Maps instead of mapped-by-you OpenStreetMap, and not going to change? That's time to throw away Google Maps with new map changer!

To use it, add this line to your /etc/hosts (for windows - c:\windows\system32\drivers\etc\hosts):

make sure your proxy (if you use one) has updated its DNS-caches, point your browser to http://maps.google.com and watch OSM appearing instead of old Maps layer.

If you want to see stats on your country in your language or have other nice ideas, feel free to conatct me. :)

Posted by Komяpa on 8 September 2009 in Russian (Русский).

Hope somebody will start making daily dumps for them :)

Hope, somebody will set up a daily .osm.bz2 for them. Cloudmade's weekly dump is toooo rare... :)

In the last some days, some people from foreign countries came to my playground and wanted to see stats on their regions. So, I added them to the daily script :)

And, to those who haven't seen before:

Thanks a lot to Geofabrik guys who daily create dumps of all these countries. They lose relation members for Belarus, half-a-country for Macedonia, but anyway - they do a tremendous life-easifying work :)