Posted by IsStatenIsland on 9 May 2020 in English (English).

CGP Grey made a video about this issue.

Ellis Island (and Liberty Island, formerly called “Bedloe’s island”) sits on the New Jersey side of the Hudson River. New York was quite territorial over the river, claiming the entire river as New York territory, such that New York claimed that even New Jersey’s piers belonged in New York’s jurisdiction. New York and New Jersey agreed to a compact in 1834, which set the proper boundary, as one might expect, down the center of the river and bay. The compact also set the other interstate boundaries around Staten Island and into Raritan Bay.

This is Ellis Island in the New York harbor. The New York-New Jersey border runs to the east: 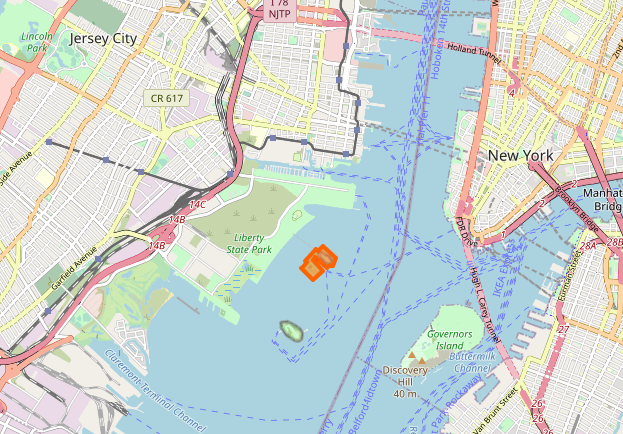 Now what if you expand the island? The federal government had bought the island in 1808 and was used as a fort in its early days. The island was first expanded in 1857, which is important to note as the 1834 compact already set the interstate boundary. Ellis Island started its immigration history in 1892, processing over 12 million aliens, and had been expanded multiple times until its closure in 1954.

The federal government had been clearly working under the premise that any additions to the island were part of New Jersey, having been granted a deed to some of the land from New Jersey. This excerpt is from the SCOTUS case, giving a background:

Controversy arose when renovation plans came up in the 1980s. Nothing serious happened leading to the lawsuit, but it reached a critical point where there was a clear dispute and both Jersey City and New York City claimed local law applies on the island, except Jersey City seemingly didn’t claim the New York part, consistently with the compact.

The Supreme Court is granted original jurisdiction for any suits between two or more states. New Jersey sued New York in 1997 and proceedings took place in 1998. New York tried arguing that New Jersey had abandoned its claim, but this flies in the face of the 1834 compact. Historical reasons and logical inference give some credibility to New York’s claims, but New Jersey won the case 6-3.

There remains an actual gap in information on New York’s territorial claims before losing the case. I cannot locate any maps that show New York’s border surrounding the island, as the maps I’ve found don’t draw any border at all.

There is probably little practical effect of who owns the island, as it behaves somewhat like private property as it’s owned by the federal government. Jersey City considers the island tax-exempt, probably in terms of local real state taxes. Perhaps some sales taxes?

Our friends at Esri have written about this, especially since some of their software was used in the suit.

I’ve been watching activity around Ellis Island on OSM for a few years. Sometimes there’s a note about how the border looks weird, but this is how it’s supposed to be: one exclave of New York inside a portion of the island. The rest is part of New Jersey, as is the rest of that side of the Hudson River. In early April, a few weeks before the note, there was also talk on Wikipedia, with the same verbiage as in the note.

Alas, here is how it appeared in OSM at least within the last few years: 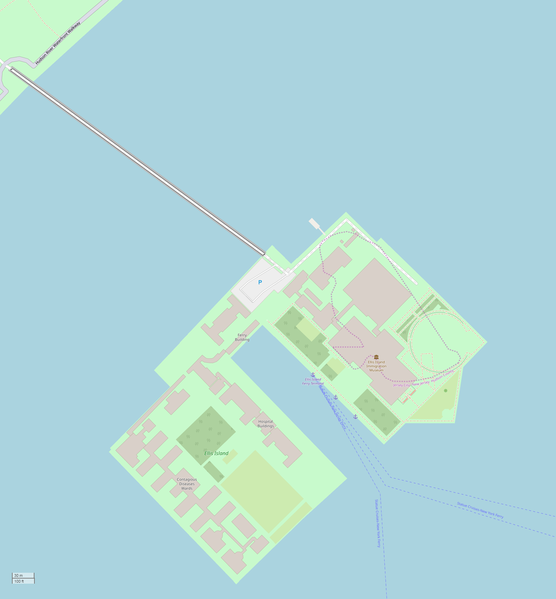 That looks weird and matches all the descriptions of the boundary, which is perfectly fine… except until I saw this note. The person provided pictures, so there was clearly something wrong.

I’d rather not trace from an image of unknown accuracy. In the SCOTUS decision, the boundaries are described in courses and distances starting with a latitude and longitude point. While not in an immediately usable form, and not knowing much about projection systems, I figured out a way to convert the points to something usable in OSM.

My first step was converting the 182 courses and distances into a spreadsheet-ready format. This is in fact very easy with the common text editor on Linux distributions, gedit, since I get direct access to \n and \t (newline and tab) in find and search/replace. Notepad++ (3rd-party Windows program) would probably work as well. For example, if I want to delete a repeating empty line, I can simply find “\n\n” and replace with “\n”, rather than going through all 182 rows. I converted “ degrees “ and other fields to a tab and so on to divide individual numbers into columns.

Now that my data was in a spreadsheet, I needed to take the course angles (“North 45 east” for northeast) and convert to the regular compass angles, then again to a regular cartesian angle system where I can start using trigonometric functions. I broke the length/angle into X and Y components, so now I could just add the starting point’s latitude/longitude (fortunately provided in the SCOTUS decision, so I didn’t have to learn too much about the state planar system) and have the entire list of coordinates. The best way to actually get this onto earth coordinates appeared to be by using the starting’s points equivalent easting/northing from OSM. Working directly with latitude and longitude would be quite difficult and I couldn’t find any immediately tools to add distances and courses directly.

After an annoying 182 points, here was the result against the original boundary: 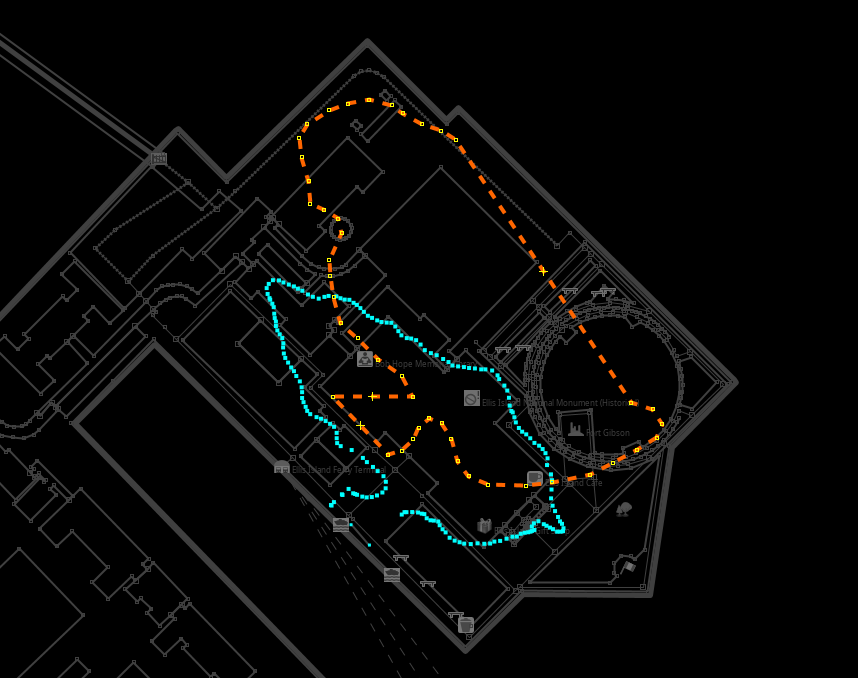 An island map, probably from the museum: 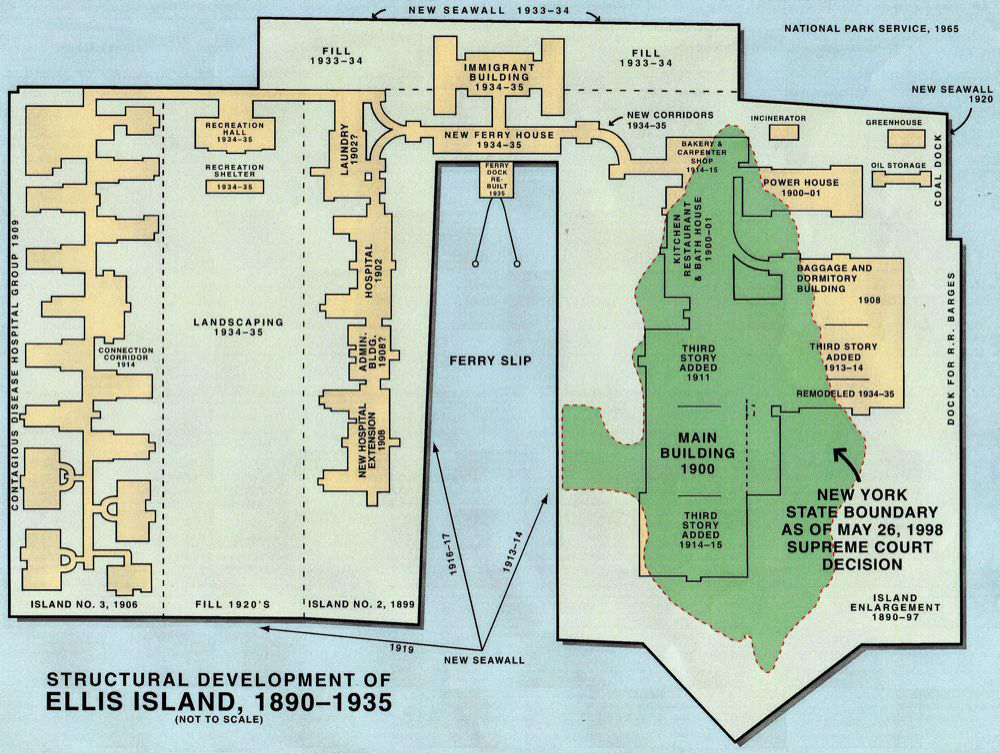 OK, not quite, but the shape is correct. It took me a few days after uploading to realize it was actually about 1.3x too small. Planar coordinate systems are unfamiliar to me, so I didn’t immediately realize that you couldn’t work linearly that far from the equator. Since the length of a degree latitude shrinks the further you get away from the equator, all I had to do was multiply the computed vector distances by sin(90 - latitude) and the correct values were ready.

Now I wanted to be more creative with uploading. Why add 182 nodes by hand? I had some fun with xdotool, again using “\n” in gedit’s find/replace to add to the beginning or end of a line to insert each coordinate into a command:

This opens the “add node” menu, tabs to the coordinate system selection at the top, selects all the previous data, clears it, types in the coordinates, moves the cursor to the beginning of the line, and deletes the first character. The extra space at the beginning is because xdotool couldn’t read an argument beginning with “-“, even if it’s inside quotes. JOSM also doesn’t trim whitespace from coordinate input, even though there is no reason not to. This was probably overkill and it ended up in a few missed points, but it was fun. JOSM should really have a way to insert multiple nodes.

The final result against the previous mistake: 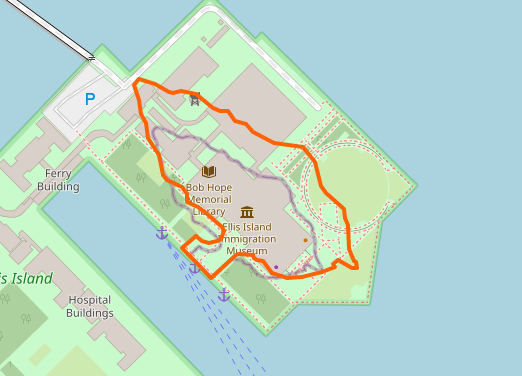 I do not understand the origin of the “little island” border, which comes from the 2008 TIGER import. You can still see the same border data on Google Maps, as they likely rely on the TIGER data as well. If you go to the NYC city map and turn on “assembly district”, you can see the correct boundary:

Some maps get it right, others get it wrong. It doesn’t help when a federal government source is publishing incorrect information.

This is really an interesting read. Great work with a serious level of attention to detail.

I did a quick check using the pyproj library and you’re not out by more than 200 mm so I wouldn’t worry about it.

There is an article that explains how they scaled the boundary off an 1857 map, so that’s going to be super accurate…

I also enjoyed the explanation about why NJ and NY spent so much time fighting this: “It’s a fight over gift shop sales tax revenue”.

Glad to hear my import worked. One must wonder how they measure heading/course in their surveys, since the heading of a straight line isn’t constant unless you’re going north or south.

Well they tried the best they could to extract the original border, but their inaccurate result becomes the legally binding, accurate boundary.

Also, I linked to that article in the main post -> “Our friends at Esri have written about this”

I hope that someone can at least to report to Google Maps this serious error reported by me (first on Wiki and therefore on this site) because it isn’t right to see this wrong map on Google Map and Google Earth. Thank for the possible help.

I just corrected it to use the specified coordinate system (NAD 83 EPSG:3424, which is actually metric) and did the trigonemetry from there in a spreadsheet. How does it look now?