I don’t think anyone blogged about London OpenStreetMap Q&A events yet, but we should! We’ve been experimenting with this new event format in London. Well I haven’t. I’m still setting up occasional pub meet-ups, but thanks mostly to Firefishy’s organisational efforts, we’ve been escaping the pub, and doing something a bit different.

These are presentations evenings, and also (trying to be) an opportunity for discussions and questions, and getting help with mapping or using OSM. We’ve had a few now. They’ve been pretty successful, with increasing attendance each time. On Wednesday night we had maybe 30 people attending.

I’ve been forgetting about the FOSS4G UK conference, which was taking place Thursday and Friday. We missed an opportunity to advertise our thing as a warm-up event to that. Some people figured it out though. Janet Chapman was going on to give a similar talk at the conference, and there was at least one other person who was visiting the UK for FOSS4G UK, and taking in our event beforehand. 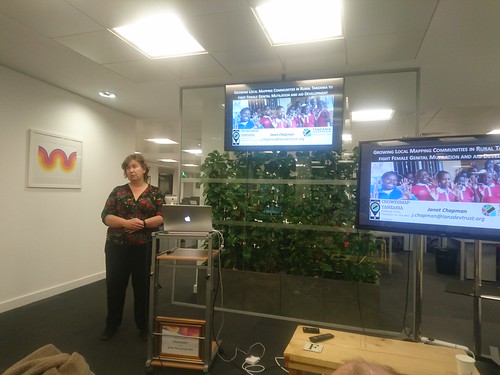 Janet Chapman gave the first talk “Crowdmapping rural Tanzania to help end Female Genital Mutilation and aid development” (Crowd2Map Tanzania). Janet has been well meshed into the London Missing Maps humantarian mapping crowd, and her talk was describing all the various tools (tasking manager, field papers, mapswipe, etc) which she has adopted to good effect for this ongoing Tanzania project. You can join in with this work via ‘Tanzania’ on the Tasking Manager. But this is a great example, not just of humanitarian mapping from afar, but of tight collaboration with the locals. The local activists who are tackling the FGM in Tanzania, seem to be seeing the mapping feedback loop. They’re joining in with contributing data, (on-the-ground gathered data. The good stuff!) because it makes the maps more useful in the areas they are operating in. 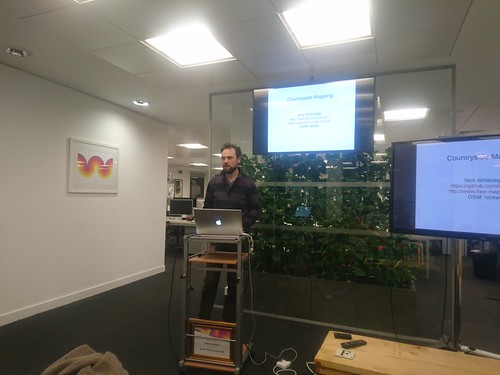 Nick Whitelegg talked about a topic a bit closer to home, “Using OSM for countryside mapping”. The rendering on his website, freemap.co.uk is designed for country footpath users. It colour-codes the paths by their legal classifications. In particular the designation tag is important, or at least it is important in the UK if you want to understand the legal status of footpaths. Nick has been involved in OpenStreetMap since pre-historic times, and in his talk (which went into some technical detail) he described how freemap.co.uk was intially displaying maps built upon the OSM API before OSM offered planet dumps!. He was in this game early! Certainly I remember freemap.co.uk as a feature of the early OpenStreetMap landscape. Nick himself joined the project in 2005!

After those talks we had a little bit of time for a group discussion. I wasn’t sure if this was going to work well, and I had been writing down some ideas for discussion points, worrying that discussion flow might not be forthcoming. No need to worry though…

We had one question/observation from a chap called Will who said he was new to OpenStreetMap and found contributing via mobile apps wasn’t as easy and approachable as he would have liked (although techy himself he was looking for an easy experience to recommend to less techy friends). That was all we needed to trigger a lively group discussion with ideas for app recommendations, ideas for making things easier, ideas about whether mobile apps are a good way to start, all of which burned through the time quite easily, and we had to continue discussions in the pub.

Additionally we had a good long period before the talks started, to chat amongst ourselves. I was trying to advise someone on options and software choices to solve a particular map usage problem. Trying to help people with their map-based projects is one of the main ideas of the event, and the reason for calling it “OpenStreetMap Q&A”. I’m not sure we’ve figured out the ideal format for making that happen yet, but it does happen just with getting people in a room together (with pizza)

Huge thanks to Firefishy for organising and to WeAreFriday for hosting this event! The next one is already being pencilled in. It may happen on the 2nd of May. Join the meet-up group to keep track

Is the Q&A an example of the sort of event we could organise round the OSM UK meeting in Manchester this May?