To monitor the changeset count and make my own attempt at getting the hundred millionth changeset, I had a bash oneliner running in a terminal that refreshed the count every 2 seconds and, after changeset 99 999 878, every second. These are the resulting graphs (click to enlarge):

The X-axis here is the time, which I think makes the most sense. Another interesting way of looking at it, though, is to plot the changeset number on the X-axis so you can more easily see where the 100 000 000th was and what happened before vs. after:

Note that this is a scatter plot, meaning that it plots the points on the X-axis equidistant. If there is a gap in time, it will plot points further apart, or if there is a jump in the changeset number, it will also plot points further apart. Since there were around 10 changesets per second for a few seconds, you can see it pulls those data points horizontally apart.

These edits were of course made before the milestone so the true rate will be off, but the true “what would have happened if this event hadn’t been tonight” is indeterminable. We could look at previous Thursday nights’ rates, seasonal influences, growth rates, and still have error margins. The people that I talked to seemed to have their changes lined up much longer than 10 minutes ahead (more like a few hours) so I don’t think this influenced the 1.204 figure much.

Perfectly. I see no disturbance at all.

But wait, what’s up with Exim, the mail server? 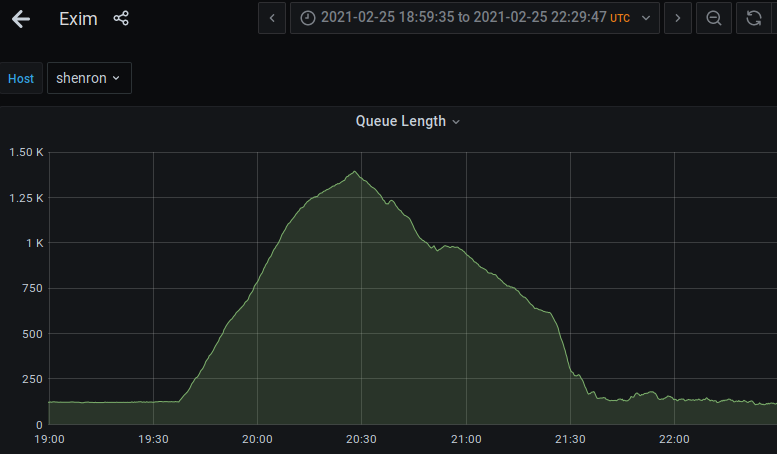 The changesets were handled just fine, but emails are acting funky. Why are thousands of emails being sent in the first place? Well, people started congratulating Lamine Ndiaye on the changeset: each one sends one email. But everyone who replied also gets an email notification! So the second comment will trigger two emails (to the author and the first commenter), the third one three, etc. Within 30 minutes there were 65 comments, which would have triggered 2145 emails if nobody quickly unsubscribed. On Telegram I heard that someone on IRC asked to stop congratulating and, if you did, unsubscribe from the thread.

This isn’t even exponential growth, e.g. the fourth comment didn’t trigger 8 emails or anything, but still it created quite a storm. Interesting to see what behaviour is created during unusual times.

The top two graphs were made with LibreOffice Calc, the bottom one is from a server monitor as linked by brabo in the Dutch OSM Telegram group.

Data collection was basically fetching the recent changesets page (you could find that link by looking at what page is requested when you click History on the homepage) about once a second. It’s fairly crude, it would be more accurate to download each changeset and look at the timestamp, but this was a quick way to also do an attempt at the milestone edit and afterwards I just used the data I already had. To actually turn this page into something useful, a little bit of Bash was used:

This will forever (while true; do) fetch the page, look for changeset_[digits], take the first one, cut off the changeset_, and remove the trailing newline. Because it’s not piped further, this will now be printed to the terminal. The second command prints the current date and time. Because we removed the newline from the previous command, it will appear on the same line, hence the starting space. The two date formats used are 2020-02-25 19:29:30.12345 and 1614390123.12345: the former is easier to read for me and can also be used in LibreOffice Calc, the latter is convenient for doing calculations on since it just counts the number of seconds since January 1st, 1970 (commonly called a unix timestamp). The terminal will show something like:

To get this into LibreOffice, you can either copy and paste the whole lines and have it be parsed as space-separated csv, or take the individual columns by pressing Ctrl and then selecting the text you want. This will let you select, for example, only the changeset numbers as a block without taking the rest of the line (at least in Gnome Terminal).

And from there it’s basic LibreOffice Calc usage. For example to get the number of changesets per second, if the changeset numbers are in column A and the unix timestamps in column B, insert into column C2: =(A2-A1)/(B2-B1)

And then drag it down or copy it down until it covers the whole range of values. This formula divides the number of changesets made by the amount of time elapsed between the two requests.

In case anyone wants to do the more accurate changeset submission time method, that would probably look something like:

Of course, for very large volumes it might be better to download a planet file with history, but for just a couple hundred changesets around some event this is presumably better.

Let me know if you could use some help obtaining or analysing the data!

By the way, don’t miss the OpenStreetMap blog entry:

This milestone represents the collective contribution of nearly 1 billion features globally in the past 16+ years, by a diverse community of over 1.5 million mappers.