When I moved to the United States six years ago, center turn lanes were a new thing to me. Two Way Left Turn Lanes (TWLTL) , as they are officially called, make traffic safer on busy roads where left turns are made frequently, by offering a dedicated lane for left turns:

When I first started to map these lanes, there was no documentation on the OpenStreetMap wiki on them, so I just started to map ways that have them with center_turn_lane=yes, thinking that I’d revisit them later if the community came up with more sensible tagging scheme.

In 2012, infamous US mapper NE2 created a page dedicated to TWCTL, adopting the British spelling centre_turn_lane=yes. There are around 6000 uses of this tag, most of them in the United States. The page was created without much if any discussion in the US community: there is only one reference to it on the talk-us mailing list[1].

Since 2012, more elaborate tools and tagging schemes have emerged to map lane configurations. I particularly like the Turn Lanes Editor JOSM plugin which, together with the Lane and Road Information paint style, offers an intuitive and visual way to add lane details to ways. 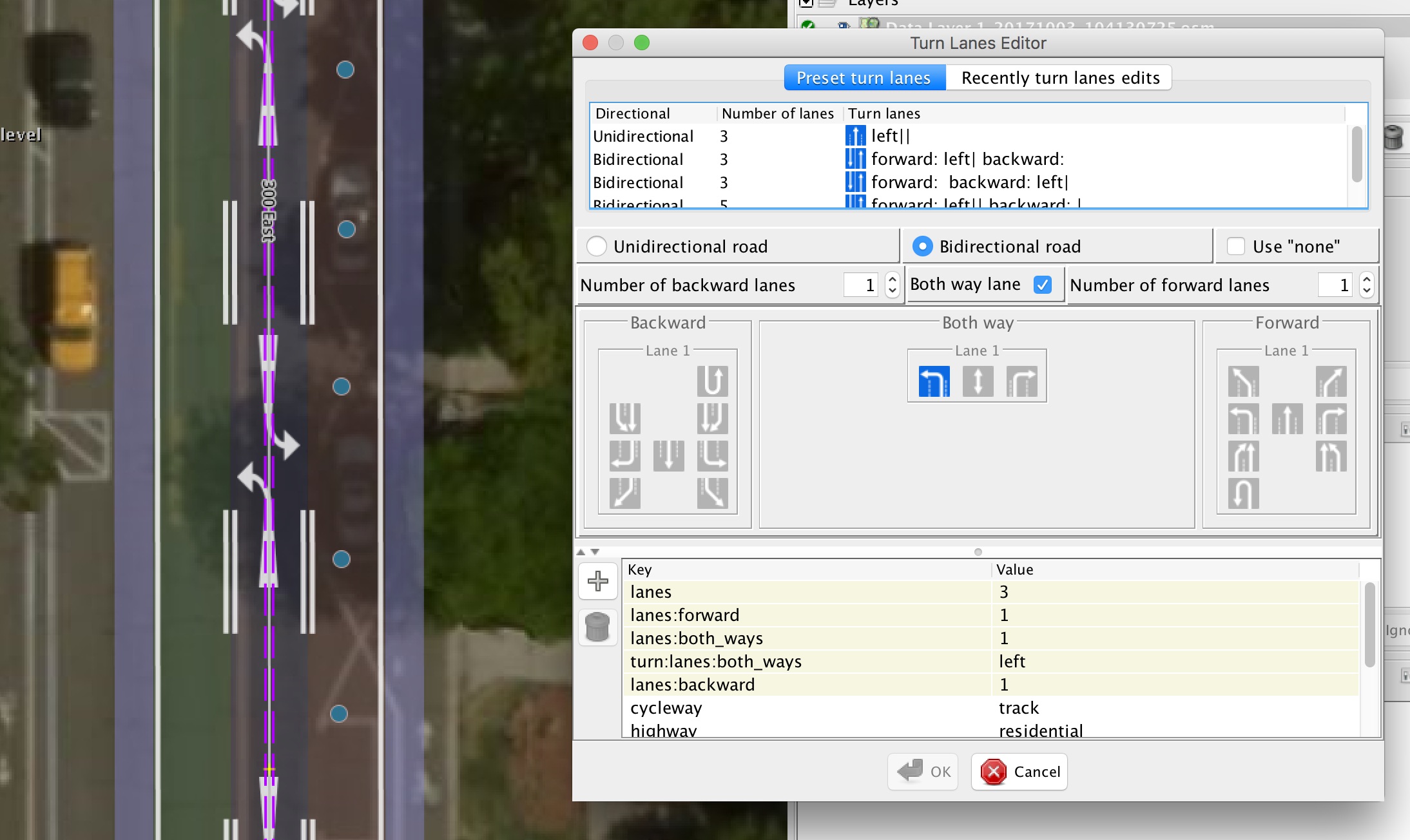 As you can see, when a two-lane road with a TWLTL is tagged using the plugin, the map paint style offers the correct interpretation. The tags on this way would be as follows:

Even though this looks much more complicated than just centre_turn_lane=yes, the plugin makes it straightforward to map (it even remembers recently used configurations so you can easily apply to other ways) and it uses the generic lanes tagging schema that is already in wide use, and allows for tagging even the most complex lane configurations.

TWLTL have been a topic of discussion in the Telenav mapping team. We have been adding a lot of lane configuration details in Detroit and Phoenix. For now, I gave the team the following guidance:

I would rather have one consistent tagging style for the United States (and other countries where TWLTLs are common. I would prefer to use the lanes / turn:lanes tagging for that. What do you think?

I’m in favor of the lanes/turn:lanes syntax, if only because that’s the style used by the current plugin and it allows for center lane uses other than left (or right) turns.

What we are really missing is a consistent way to tag reversible lanes, either as a center lane or such as those found in the Houston area as HOV/HOT lanes. The syntax used by the plugin isn’t recognized by the map paint style, the default rendering style doesn’t seem to do anything special for oneway=reversible, and that tag seems to confuse a lot of tools.

In general I change the centre_turn_lane=* or center_turn_lane=* tagging to the more widely used turn:lanes tag.

Just remember that in the UK (and some other countries) the final tag would become turn:lanes:both_ways=right

The OSM mailing lists are notoriously hard to search.

It used to be a lot easier when Gmane’s Web interface was still around. If you use a newsreader like Thunderbird, you can subscribe to gmane.comp.gis.openstreetmap.region.us and search threads using the built-in search function.

Looking at that example screenshot, kind of leads more support to my theory that it’s time we start tagging for where the parking strip and bicycle lanes are on the street in order to provide correct lane guidance.

I would rather have one consistent tagging style for the United States (and other countries where TWLTLs are common. I would prefer to use the lanes / turn:lanes tagging for that. What do you think?

@mvexel I support you on your willingness to have consistency in the data in the US and around the world.

As you see on the screenshot, turn:lanes:both_ways tag has three values: for the left or right turn and for the case when the center lane is used for reversible driving. It is much clearer tagging then just cent{er,re}_turn_lane=yes (and I just like namespace approach 😏).

I use The Mail Archive to search the OSM mail lists:

In fact, something as obscure as centre_turn_lane you can search all their mail lists: