Geochicas, closing the gender gap in OSM is a path that is just being mapped

Posted by mapeadora on 11 January 2018 in English (English).

The dialogue of the Openstreetmap LATAM community in the channels used (chats, lists, forums, events) has revealed a very low female participation and the need to develop a general and permanent reflection on gender in this community.

Staring 2016, with this objective, a group of 10 female mappers (Geochicas) has been formed within the community, who dedicate a particular effort to help the development of this debate, in addition to mapping activities directed by and toward women with a gender perspective. One of the channels for this debate is through the organization of panels for reflection and discussion at each event of the OpenStreetMap community (State of the Map) and different events in communities related to technologies and open data.

Since the creation of Geochicas, we had organized three panels focused on gender which took place in SOTM LATAM 2016 (Sao Paulo, Brasil), SOTM International 2017 (Aizu Wakamatsu, Japón), CubaConference 2017 (La Habana, Cuba), SOTM LATAM 2017 (Lima, Perú) and other activities in different events such as the 1st Meeting of Cyberfeminism in Ecuador, Digital Security Workshop in Paraguay, among others. At the end of 2017, the main channel of Geochicas has 74 members and about 15 active people.

The purpose of the panels is to demystify the gender topic, sensitize the community to the existence of a gap, understand the problem that this gap represents in terms of production (technology, information, space representation, definition of work agendas), of data generation and validation, to raise awareness about the structures that condition participation, and also about difficulties and discriminations in the community.

Only a few men participate in the dialogue, many leave, maybe considering the talk of little interest for them or considering it is a panel for women. Those who stay tend to take an observer role or to provide an idea to the mode of the statement, of the testimony, but do not debate or pay too much attention to the answers.

The panel made during the SOTM Latam de Lima, has made visible what was said previously, a little participation from men, but also contributed to understand that a lack of participation and silence are a response from the community about their position regarding integration and diversity. From Geochicas we emphasize that the map is a structural reflection of those who build it. 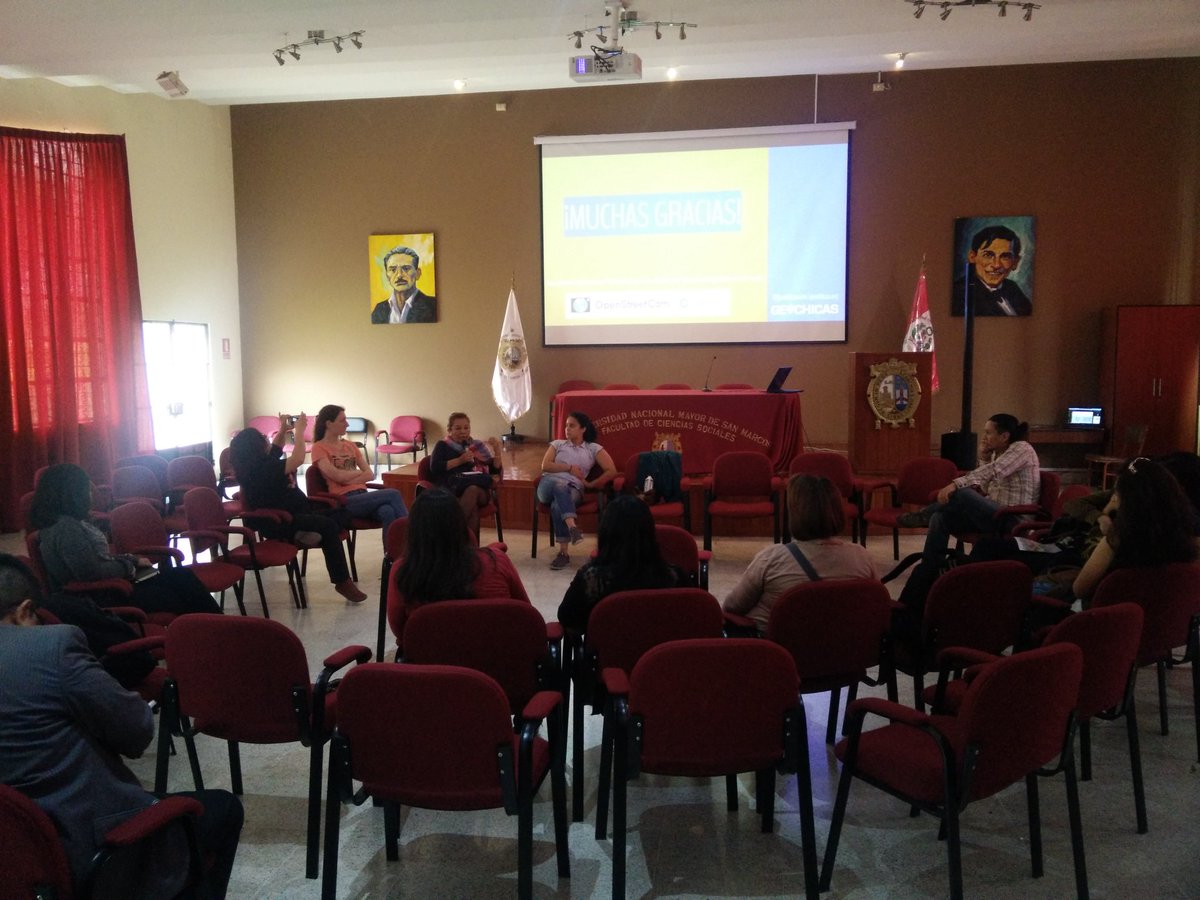 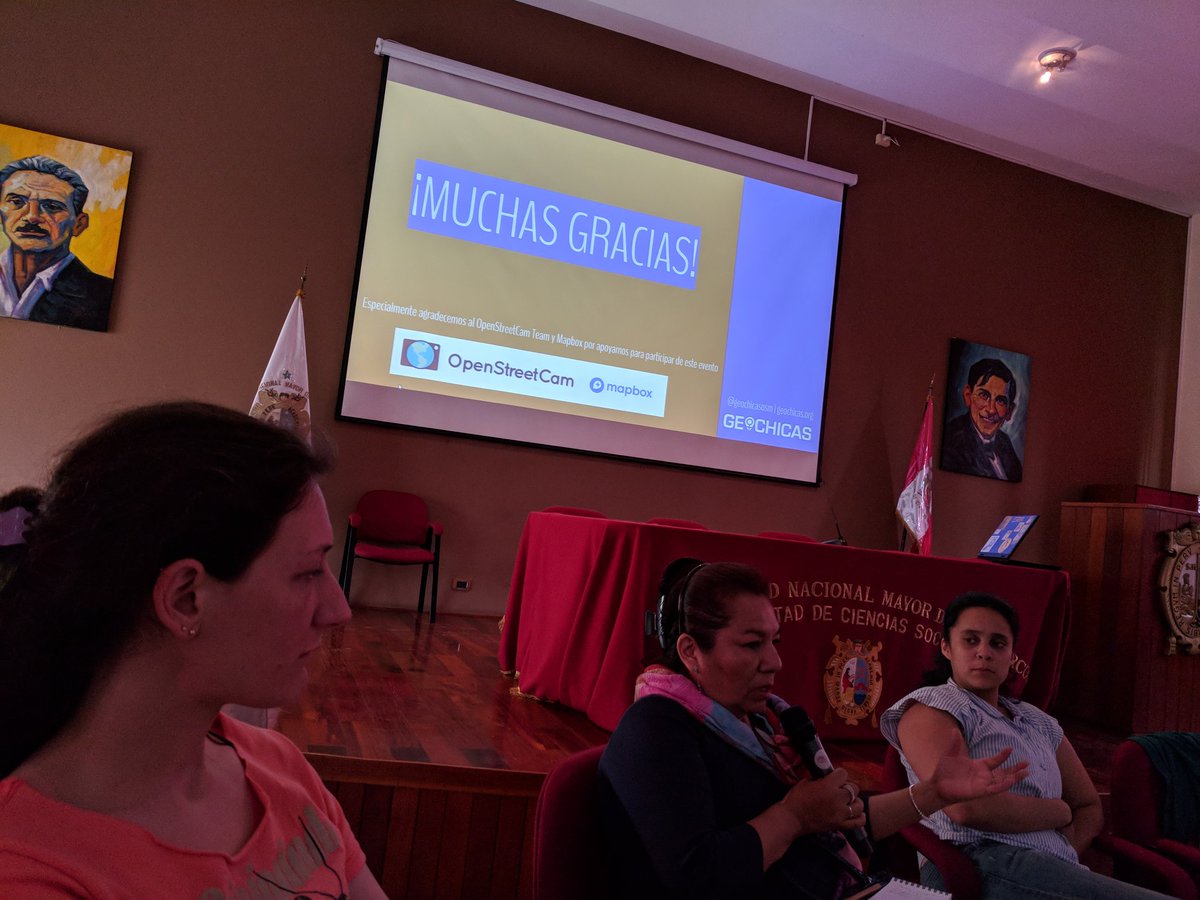 We are doing a survey on the gender gap and the type of participation women have in global OSM, which aims to contribute to the dialogue between peers of the community. See preliminary results of the survey -in Spanish-

In conclusion, there is a very broad road to travel to: 1. Know the causes and effects of low gender diversity in the community 2. Generate a successful analysis on inclusion within OSM communities 3. Innovate in communication methods that are given within the community as in the production of data and information so that it is relevant to everyone on the map 4. Achieve open, keep open, and expand the dialogue in the community on gender, with a sensitive, in-depth, responsible participation, on the part of all the people who collaborate and the diversity of genders. Let’s move from testimonies and statements to a real dialogue and collective construction of the agenda.

The activities carried out by Geochicas in the framework of the SOTM Latam 2018 in Lima, Peru, were thanks to the support of the OpenStreetCam Team and Mapbox, who have been a fundamental contribution for the projects of the collective and also for the possibility of participating in events of community.

Geochicas actively seeks for the support of companies, groups as well as the community to carry out projects focused on closing the gender gap in OSM, and also financial support to achieve greater participation of more women in the OpenStreetMap and open technologies events.

Hi there. Thanks for posting this. I recently had a Physical Geography teacher in college that is a woman. Although I had put brief thought into her gender and carrier choice at the time, I hadn’t taken the time back then to reflect on how being a female might inform her experience in the field of geography or the challenges she might have faced getting where she is. It is an interesting thing to ponder though. Are there any STOM talks or any further reading material on the subject in English that you can recommend? As a male, that is sadly mostly ignorant to this subject, Id like to learn about it and also do what I can to help the OSM project be more inclusive to women. I really have no idea where to start though. So anything you can recommend would be great.

Keep up the good work. 👍