I made an attempted to display boundaries according to some countries official point of view. Most of boundary are consensual. But some are de facto with no recognition from one or two of the neighbors. This facto are the ground mapped in OSM. But some countries have different political claims over the territories. Display this claim is often mandatory in these countries. So some boundaries or territories are disputed by countries. Disputed here meaning, that the country is not officially recognized the de facto ground status. Some other boundaries or territories are claimed. The idea here is partially based on the rejected proposed features “Mapping disputed boundaries”.

Disputed boundaries are here treated as way level. As only a part of the de facto boundary is rejected.

In this experiment I do no try to rebuild this closed polygon. I based on osmborder to derive a modified version. Originally, the tool de-duplicate the border from the relations to ease the render.

So in the output of the tool, a way of boundary is marked as: * neutral, if is part of the standard de facto ground boundary framework, the standard OSM meaning of boundaries. * disputed, if has disputed=yes, dispute=yes, border_status=dispute, disputed_by or boundary=disputed tag, plus if is part of a boundary=claim relation. Typically can be rendered with dash. Note, a neutral de facto can be disputed. * disputed_by, list of countries code rejecting this way as a boundary. * claimed_by, list of countries code claiming this this way as boundary.

The de facto map can be show using the neutral marker. Additionally all ways marked as disputed and and not as neutral can be display with dash. 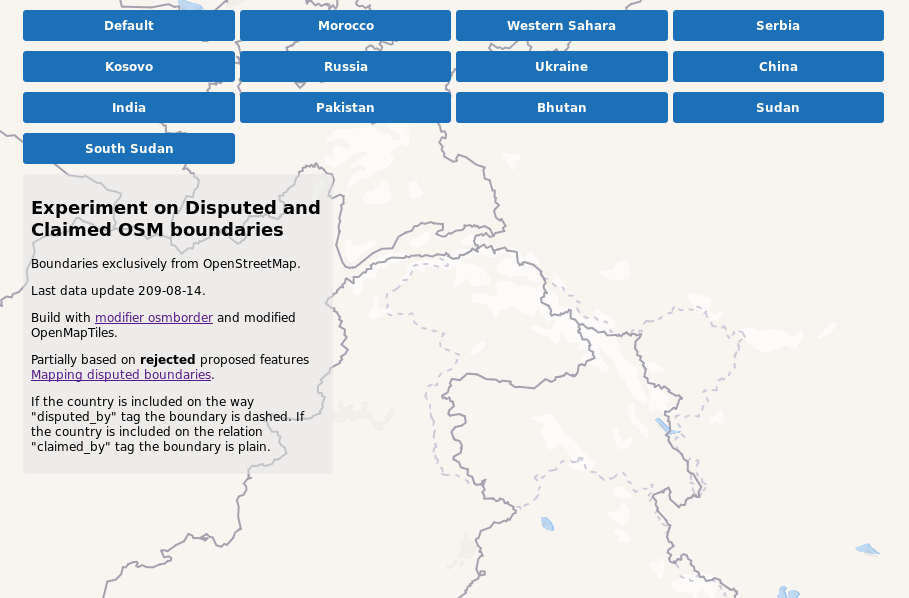