My Experiance With Devices Used in OSM Surveys

In this article, I’ll continue sharing my experience on finding a generally-available commercial device to be used with preforming surveys for contribution to OSM. I previously wrote about GPS precision and why, by itself, it is limited to meter precision.

Below are the devices I’ll be discussing based on my own usage. I’ll share how I used them and my thoughts on each. In a final article of this series, I’ll provide a GPS trace comparison of the EcoDroidGPS, smartphone, and Garmin GPSMAP 66sr as well as which device I’d pick if doing it all over again.

The first device I used for surveys and general contributions to OSM was with a smartphone. I currently use a Samsung S10e with the below Android apps depending on the complexity of my contribution:

Not surprisingly, since I generally have my phone with me, this is the most convenient when I stumble across mapping opportunities in the wild. The location accuracy is acceptable. It can be used to map larger roads and general POIs without issue, but is not accurate enough to trace a sidewalk or trail. I’ve also noticed that accuracy improves in urban areas likely due to the ability for Google’s location services to supplement GPS data with nearby WiFi access points and Bluetooth.

Using the same phone for both general daily tasks and mapping places a heavy load on the battery. I’ve been out on plenty of “spur of the moment” surveys that had to be cut short or rushed due to a dimishing battery charge. When mapping GPS traces, I usually use an aggressive logging setting of 1 second combined with higher-than-normal screen-on time as I record POI information. As such, if I’m mapping an area for more than a couple of hours, it’s imperative I bring a battery pack or have access to a charger. The battery hinderance tends to crop up more often than expected, but can be addressed by planning ahead.

My primary device for detail mapping is the EcoDroidGPS. It is intended to be used in vehicle, but can be adapted to provide excellent precision inexpensively. The EcoDroidGPS includes the following: While mapping, I’ll power the unit using a power bank in my bag and a makeshift antenna mast with the USB receiver on top of it connected to my phone via Bluetooth. The receiver sits above my head which really helps to remove interference.

Regarding accuracy, the EcoDroidGPS is precise enough to map trails, sidewalks, and residential roads confidentially. If I’m intentionally visiting an area to preform a survey, I’ll plan to use this device. The entire arrangement is cumbersome, but I’m happy with the precision this device offers. 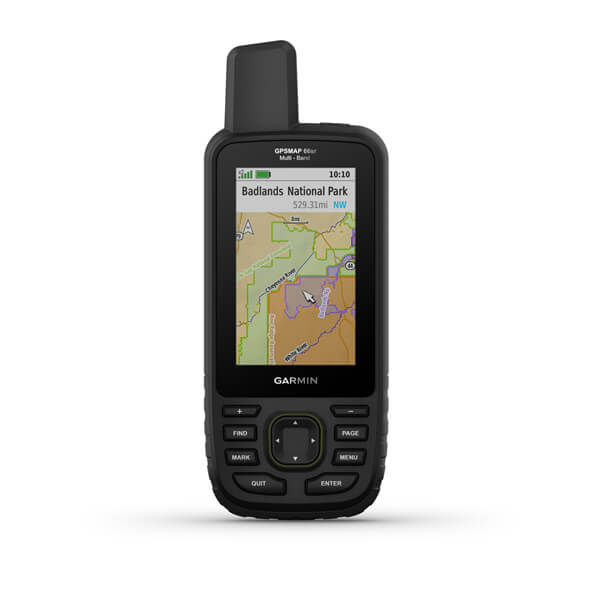 The 66sr from Garmin is the company’s newest (launched fall of 2020) outdoor handheld. Based on the footprint of the existing GPSMAP 66 series, the 66sr was introduced with multi-GNSS and multi-band features promising greater precision over existing navigation products.

As someone who does not upgrade their smartphone each year, the announcement of the 66sr was extremely interesting to me as a solution for mapping trails, sidewalks, and less established ways using more accurate multi-GNSS receivers. I viewed the dedicated navigation unit as a solution the battery woes of a smartphone and the cumbersome set-up of the EcoDroidGPS.

I don’t think this unit is for everyone, especially if the primary use would be a survey tool for OSM contributions. It’s expensive, the interface can be confusing, it’s difficult to understand how the myriad of apps and management programs fit together, and it doesn’t offer many unique features that cannot be found in a recent smartphone. However, if you find yourself in extended outdoor activities with a potential for spotty cell coverage, the perspective changes to a rugged outdoor navigation device that can also used for OSM contributions.

The 66sr’s multi-GNSS receiver results in greater accuracy compared to a smartphone, but ties the accuracy of the EcoDroidGPS. I can accurately map narrow trails and sidewalks. The 66sr seems to have been launched a bit pre-maturely in regards to accuracy-related features. The product page and owner’s manual highlights the inclusion of RINEX logging, WAAS/EGNOS, and multi-band configuration options, all of which are currently missing in the 2.80 version of the device. In contacting support, they promise many of these features are still in development. WAAS/EGNOS and multi-band settings can increase accuracy while RINEX can be used in post-processing to gain centimeter accuracy and confirm all reported accuracy systems are working as promised.

The final group of devices are ones that require significantly more elbow grease and know-how to get up and running, but can have potentially greater results than off-the-shelf solutions previously mentioned. Every aspect of these can be configured, since they must be assembled and coded your self.

As mentioned in the previous article“Accuracy and Precision in GPS Units”, there are accuracy limitations when using a single device and most survey-grade two-device set-ups with a base station and a rover costs thousands of dollars. The simpleRTK kits from ardusimple may be a solution to lower the cost involved. I have not used these kits, but everything needed to get a base station and rover combination up and running can be purchased and researched on their site.

Returning to single device location devices, Arduino components can also be purchased and a program written to log GPS traces or way points that can be processed later. This has the advantage of adding and removing features important to you and developing an enclosure to fit. Although I never successfully completed the project, below is a lit of hardware and resources I used:

This series is ending up to be much more extensive than I initially anticipated. Since this article is getting a bit long in the tooth, I’ll save my GPS trace comparison for the final article and share my final thoughts.

I hope this device comparison has been helpful to folks who may be interested in exploring other options when preforming surveys for OSM contributions.

Public announcement to all mappers = be sure that your next smartphone has dual frequency GNSS.

Interesting read. I’m looking forward to the next part.

I definitely like to see more discussion of OSM hardware like this here and in WeeklyOSM. Mapping demand can continue be satisfied by removing entry level barriers like cost.

What is the point of getting such devices if the only feature is that it records tracks slightly more accurately?

When navigating on a phone, for example, that extreme accuracy doesn’t really matter if the GPS during navigation is going to be inaccurate anyway. I don’t think a road being off by a few metres makes that much of a difference.

I’m sure there might be some use cases for really accurately adjusted features, but I just don’t see buying a device for it, especially when your phone has so many more features, such as taking notes, adding housenumbers (keypad mapper, streetcomplete) etc.

Also, about “adjusting imagery to GPS traces”, I never understood why the community considers that to be so important. I don’t know how accurate the GPS is, I don’t know if the GPS was taken when walking, cycling or driving (Which would effect the position). I just align the imagery to the already existing roads, in most cases, because the GPS tracks tell me nothing. Often on major roads there are 10 tracks whose width is larger than the actual road, and so it provides little purpose at all.

@ipswichMapper For the vast majority of contributors, the precision of the standard smartphone is not important. As you say, when routing over OSM data, navigators are quite tolerant of variances in where the road is in the database versus where the navigator thinks it is. This is generally invisible to the user thanks to navigators preferring to snap to the closest road, although sometimes it gets it wrong when there are two roads very close to one another and the user will see themselves bouncing between two places.

I think this where the beauty of OSM and iterative mapping comes through. There are tons of different type of contributors and a single contributor doesn’t need exhaustive knowledge or the best-in-market tools to add to the map. For a given feature, you have the initial contributor who is happy to get the feature on the map. Then there’s the contributor who refine the tags to be as detailed as possible. Perhaps another correctly adds the feature to a relation and finally someone surveys the exact location using equipment costing thousands of dollars. This refinement continues throughout the life of that feature.

For me, contributing to OSM is an excuse to go outside and survey the location in person. As such, most of my recent contributions include modifications to hiking trails or outdoor locations. For trails, precision of the GPS device is important because there often aren’t references like streets or buildings that can be seen from imagery: all I have is my GPS track and perhaps something in a clearing among trees. Precision is also important to me because I want my contribution to be as accurate as possible. I like the idea that some hiker could look at the trail in Alltrails or some other app and see themselves right smack in the middle of the path that accounts for the small zig-zag the trail just took.

Regarding imagery, the recommendation to check the tracks is more helpful in cases where the imagery or the surrounding OSM road network is not-yet-up to date. If tracing from imagery in a newly constructed area, it can help to be a sanity check of where things may actually be when there a bunch of traces in the area. The variability of public OSM traces illustrates exactly what I wrote about in these three diary entries and your comments about the doubtful precision is exactly the reason why I wanted to share what I’ve learned. To those who are interested, they may use the information to increase the precision of their traces.

In all, I think it’s perfectly fine to rely on the accuracy of a smartphone for contributions. In fact, with multi-GNSS and mult-band chips becoming standard, in 5 years the average smartphone likely will be just as precise as dedicated location devices. There are as many individual interests as there are contributors. Take a look at the feature proposal page or one of the tagging mailing lists to see these diverse interests. Eventually someone will come along who gets a kick out of refining the accuracy of a feature from ~15 meters to ~1.5 meters.

For OSM as a whole however, its authority will depend on its overall accuracy. This authority is what impacts if it gets used in commercial applications or any situation outside of a hobby database folks contribute to in their free time.