First of all: North Wales is lovely, and I’d definitely go there again.

I went for a short holiday to North Wales with DeBigC this week and did a lot of mapping while there, but that was intended. Let me break down what we did:

Very little mapillary had been done, so we walked around (I’m especially pleased with the walk on the Conwy town wall) and also captured as much as we could on the buses we took (see below). Capturing mapillary on the bus has the advantage of getting a slightly different perspective than on the car. The disadvantage is that we didn’t bring phone holders to attach to the window, so our arms got a bit tired after a while. Show mapillary captured by me

We relied mostly on public transport. (It seems that Bangor taxi drivers do not know their local area very well - we took four taxis, and all four of them didn’t find the place we were staying at. The pizza delivery guys were much better.) I continued my mission to map public transport routes which I had started in Ireland. So I completely mapped bus route 58 (might have missed the odd bus stop, where the bus didn’t stop). For our way back to the ferry in Holyhead, we decided to take the “scenic route” and take different buses, so I got the lines 42, 4A and X4 partially mapped. All routes mapped shown on overpass-turbo. This gave us the chance to spend some time in Llanfair­pwllgwyngyll­gogery­chwyrn­drobwll­llan­tysilio­gogo­goch and map a few POIs around the café there. 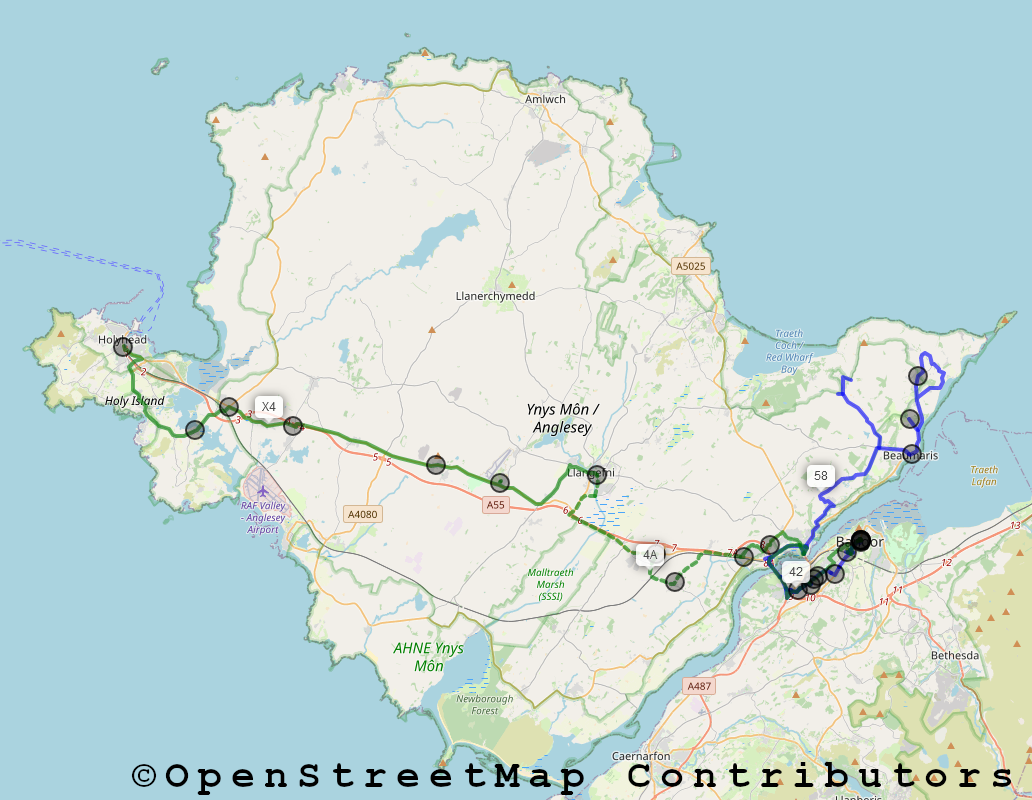 Of course, I was on the lookout for benchmarks as well, and it seems I found 15. Some of them were on old milestones (historic=milestone), which I also added to OpenStreetMap. Some of the milestones, I only spotted from the X4 bus, so the location might not be precise to the meter. There are 11 now mapped in that area, but I’m not sure if I added all 11 or only 10. And of course, I didn’t get their inscriptions from looking out the window on the bus. More work for someone else to complete. 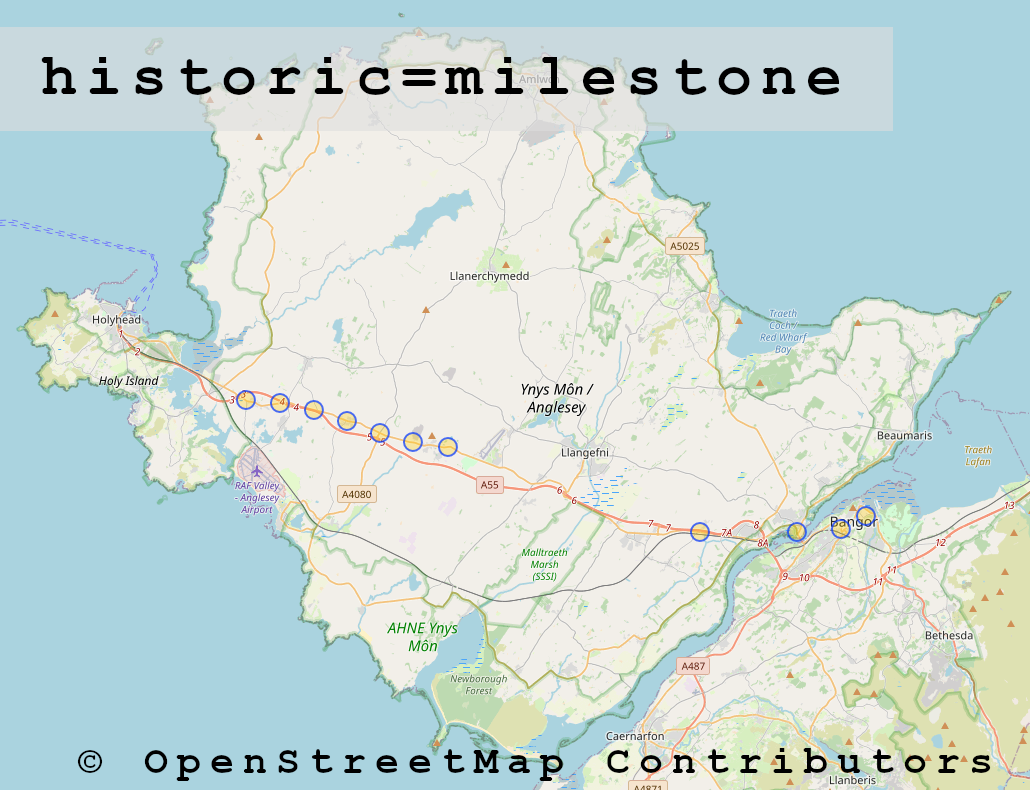 We noticed that the street names were all mapped, and found out that they had been made OpenData. Great idea - I wish we could get that data open in Ireland. We added loads and loads of buildings, because sometimes we struggled to add shops and other POIs, because the buildings weren’t shown on StreetComplete or OSMAnd.

I noticed some emergency=defibrillator being mapped, but I added a couple more - roughly 12 or so. Again, a lot of them spotted from the bus. The density of AEDs seemed much higher than in Ireland.

I noticed (and mapped) quite a few of these green stickers with QR codes on them indicating historical sites that aren’t otherwise already equipped with information boards. (operator=historypoints.org) At least, that seemed to be the rule to me. I used the above tag, and I will start a proposal for them as well. I only added title:en to them, because I was afraid that my phone would do too much damage auto-“correcting” the Welsh words. But I think I got mapillary images of all of them. 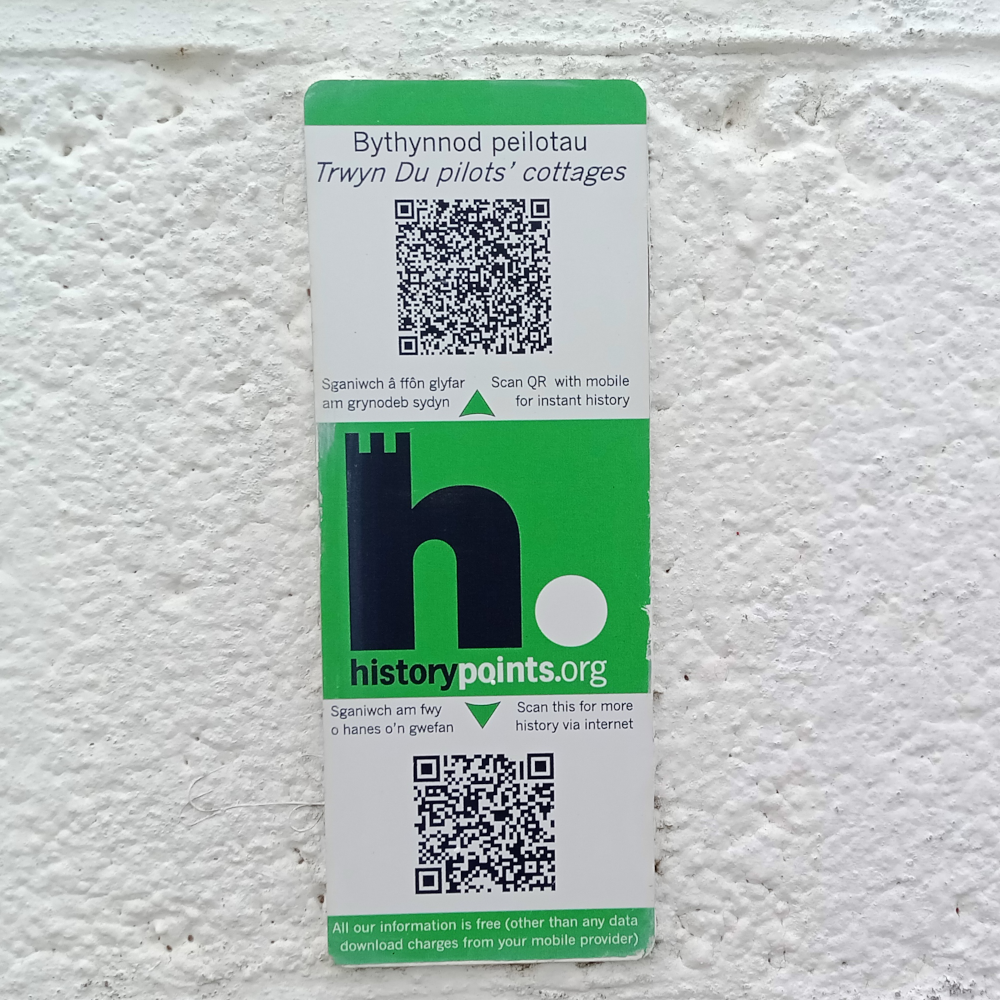 That was it. It felt good to make an impact while on holidays.

You invited me specifically to say what was going on with buildings as we found them. First of all there were buildings mapped, but they had the following kind of issues (I don’t think these issues are unique to Bangor): * Overall we found the town centre missed about 50% of its buildings while the whole area and surrounds probably had 10% of its buildings (these are estimates of course)

We left an email with the local University, which has a Geography Department (forever optimists). We suggested engagement with OSMUK.