Missing Maps in South Sudan: An Interview with an MSF Epidemiologist

Posted by athaikdin on 5 December 2015 in English (English) 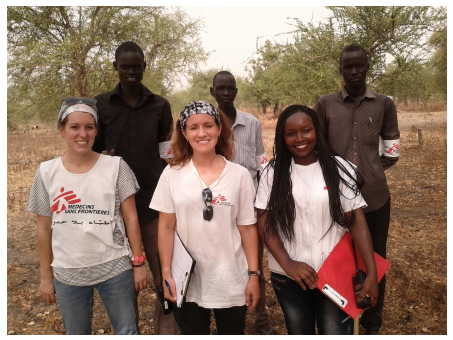 In March 2015, MSF epidemiologist Laura H. Thompson conducted Rapid Nutritional Assessments (RNAs) in Unity State, South Sudan, with the help of our very own ‘Missing Maps’. Together with her team, she used the maps to guide their investigation of suspected malnutrition among children in villages in the Mayendit County of Unity State.

In today’s post, I’ve interviewed Laura about her experience with the use of ‘Missing Maps’ in South Sudan.

Mayendit is a county in north-central South Sudan between MSF project sites Leer and Bentiu, near the Thar Jath oil fields. It covers a relatively large area that includes a market and encompasses several villages. The villages have unique names and are characterised by many households typically arranged in a line with several to dozens of meters between them. In most areas, there were only a few trees and the ground was covered in a hard dry soil. It was hot and sunny while we were there. The local administration were welcoming and interested in our work, and wanted to ensure that our work would help the community. We were typically greeted by women or children at the households and they were friendly and welcoming.

At the time that we were there, not much was available at the market and the people in the area largely rely on food airdrops conducted by the World Food Programme. While the area was relatively calm back in March, fighting is now occurring in the area.

Could you explain more about the RNAs you conducted?

We conducted Rapid Nutritional Assessments (RNAs) in several communities where we suspected there might be high rates of malnutrition among young children. We selected a subset of households within a community to approach for inclusion in the survey. Surveying that subset of households was intended to be both feasible and provide a good representation of the overall community. In just a few days, evidence of the nutritional status of children in a community is generated and may be used to determine whether or not to provide a nutrition program in a given area. In the case of Mayendit, we found low levels of malnutrition but evidence of food insecurity and so the recommendation was to hold off on offering a nutrition program, but to monitor the situation over time.

What was your work like before you got the maps? What challenges did you face?

Before receiving the maps we knew where Mayendit was and fortunately our driver had a good knowledge of the area which was very helpful. The main challenge that I faced was not knowing the number of households in the area, their layout across the area, and the village boundaries. All of this information is important in order to establish a sampling plan for the surveys that balances the need for a representative sample of households in the specific villages with feasibility, given that we only had a few days and didn’t want to push our team too hard. We actually lost internet connection the night before the surveys were to begin so I was worried we wouldn’t get the maps in time, but fortunately it was back in the morning.

Could you tell me more about your work with the locals? Were they impressed by the maps?

The locals did not have a big reaction to the maps. We hired a few local residents to assist with the surveys and I needed their help to translate the maps into what we were seeing on the ground. Together we drew new maps that integrated what was depicted on the ‘missing maps’ with local knowledge about the location of villages and households vis a vis landmarks such as the road and the market. We included the names of the small villages on the new map as well as the amount of time it would take to walk (referred to as “footing” locally) between villages, and added the approximate number of households in each village. We then used those maps to determine which areas to sample in and what the sampling interval should be in each area. It was important to involve the driver in these conversations as well, not only to capture his knowledge of the area, but also to ensure that he would be able to translate the maps into a driving route for the day and navigate the rough terrain in the vehicle in a way that was consistent with the sampling plan.

Did the locals and the MSF project continue using the maps once you left?

I don’t think so. However, local administrators did encourage MSF to return once the RNA data had been analysed so that they could be informed of the results. The results could inform their decision making for the area.

Do you have any opinions on how the production and use of ‘missing maps’ could be improved on?

It is absolutely essential to pair the maps with local knowledge of village names and approximate number of households, roads, and village boundaries. For example, a relatively small cluster of households within a larger cluster may be considered a separate village by local residents but this might not be known by those developing the ‘missing maps’. Users of ‘missing maps’ should interview local administrators, village chiefs, or local daily workers hired to assist with the field project in order to incorporate local knowledge onto a map. By making sure that the data on a map is consistent with local understandings of the area, ‘missing maps’ users can carry out fieldwork with more certainty and clarity.

It would be helpful if communication between the field aid worker and the people generating the maps could be improved. This would ensure that the correct maps are prioritised. It should also be ensured that all maps have cardinal points and a distance scale to help field workers orient themselves.

Are there any words of appreciation that you would like to say to our remote mappers?

The mappers did a tremendous amount of work and in this case with a very short timeline. We appreciated their enthusiasm and willingness to work according to our timelines on the ground.

regarding the communication between the field aid workers and remote mappers: is the local knowledge you gathered somehow transferred back? Maybe you want to take a look at the region in openstreetmap and edit the map with your local knowledge?