I live in the St. Ann’s electoral ward of the City of Nottingham. As well as wishing to be able to improve the coverage of old_name + start_date for each street in Nottingham, I am intrigued to be able to discover when streets were laid out, metalled, drained & provided with sewers. Today that all seems normal, but I was astonished to discover that Blue Bell Hill Road had no street drainage nor sewers until the 1970s; a friend in Dowson Street has a well in their basement, whilst their road also has zero street drainage nor sewer, plus no water main through the street (water supply, sewer + drainage only at the rear of the terrace).

Like many cities in the UK, Nottingham has suffered shed-loads of physical upheaval/churn across the years. That has led to the appearance, alteration, disappearance and/or reappearance of streets and thus of street-names. I’ve recently gotten access to definitive information on (at least some of) those changes, and decided that I should strike the iron whilst it is hot. This diary is going to concentrate on local streets + national communication (rivers/canals/railways) as they apply to Nottingham City; it will also filter in items of national importance that occurred in Nottingham.

First, here is the OpenStreetMap Wiki on names.

The national view of Nottingham in the early 18ᵗʰ Century was of it as a “garden town”. As one example, the land immediately south of the town was a large meadow, was flood-lands for the Trent, Leen & Tinker’s Leen, was common-land (meaning that it could not be bought or sold), and was used by all town-folk for recreation. In fact, most of the town was surrounded by common-land, and that fact acted as invisible walls which kept the town constrained in size for centuries.

The town was two centres (Castle + Lace Market) surrounded by 5 fields (see Sanderson’s map immediately below for the fields as following):–

The town came into prominence nationally because a mile or two south of the town was a bridge across the Trent (the old Hethbeth stone-built bridge is pictured above left in 1871, whilst the 1868 cast-iron bridge completed in 1871 is above right; Creative Commons CCO License). For centuries Hethbeth bridge was the only means to safely obtain passage between south & north of England on the East side of the Pennines (the Trent flows into the Humber, and both rivers are far too wide & strong-flowing below West Bridgford to be easily forded in medieval or earlier times). In fact, the bridge was so important to England that a Bridge Estate (charity) (pdf) was established in 1302, and grants of land continued to be made by the king up to the days of Edward Ⅵ (1551), so that finance was available to keep the Bridge maintained. One of the most famous lots in that estate is St. Ann’s Allotments (originally fields let out to graze cattle) and I see them from my attic window each morning, as the allotments are pitched across the opposite slope of the St. Ann’s valley to the one that I live atop. They are the largest garden allotments in Europe, and can be seen as “Hunger Hill” in the map below. They were originally agricultural lots & first became garden allotments in Victorian times; the council had a bad habit of snipping off perimeter lots from this Bridge Estate property for their favoured building projects, and that only stopped when the Allotments obtained a Grade Ⅱ* status. 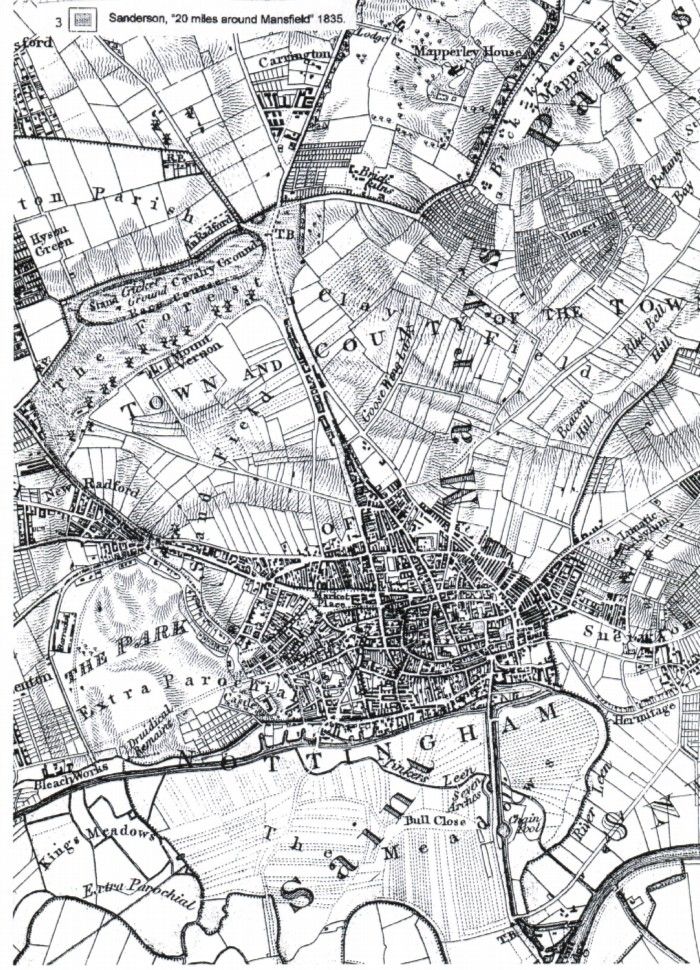 Above is part of the Map of the County of Nottingham from ‘a Careful Survey Made in the Years 1834 & 1835’ by George Sanderson; note that this circular map is kept as one of the 80,000 maps within the collection of the University of Nottingham School of Geography in the Edwards Resource Centre, that they have an Inventory (pdf) and that they also have an online-browser. 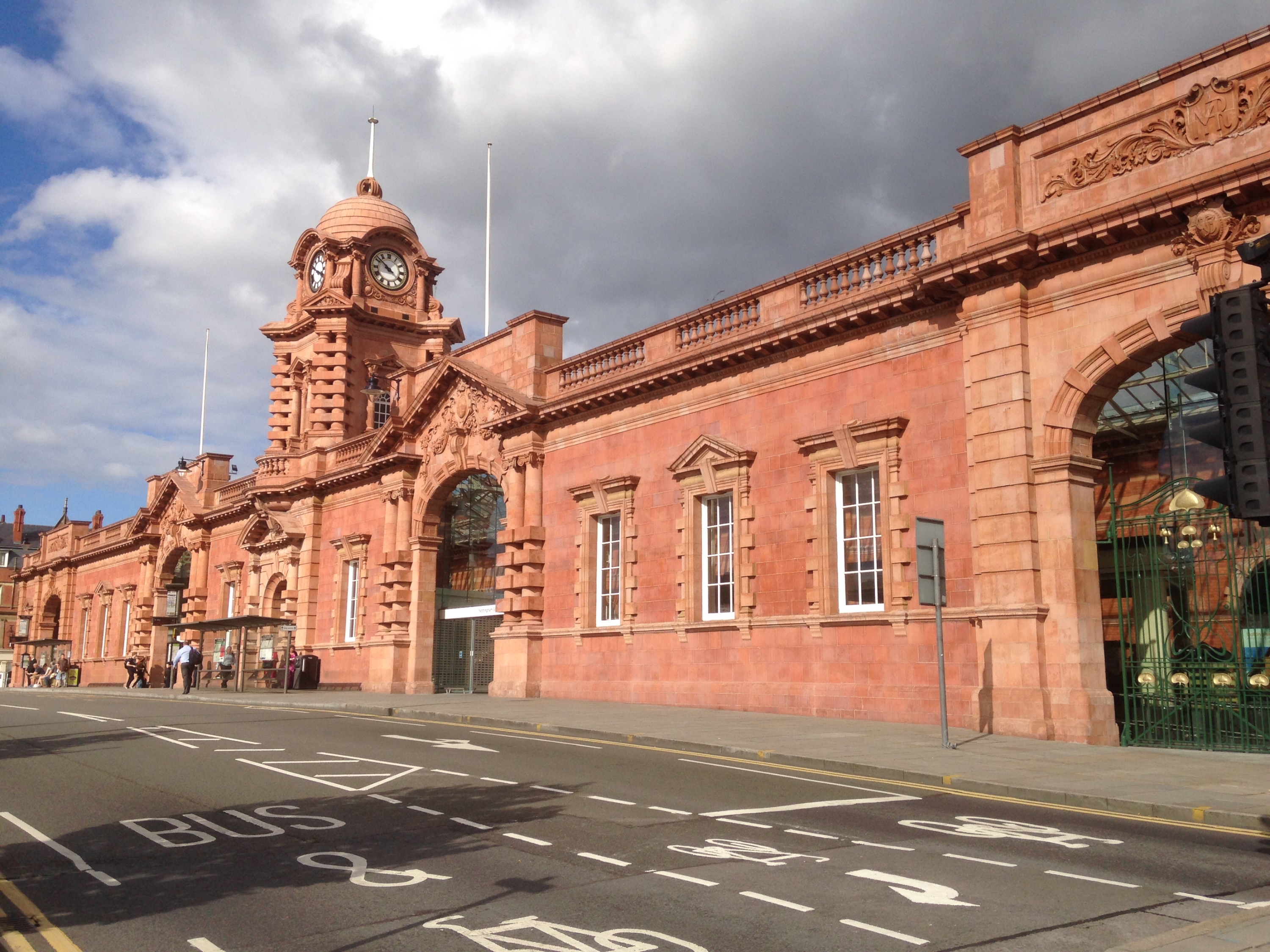 Above is the Nottingham Rail Station on Carrington Street, the 3ʳᵈ & final station on the site & Grade Ⅱ* listed.

As the late 18ᵗʰ Century approached, Nottingham began to be degraded by an on-setting revolution. The Industrial Revolution began to pickup steam & at that time gained it’s greatest expression in the UK. There was a massive move of humanity from working on the land to working within factories & workshops. At the same time, general population numbers began to grow, slowly at first and then exponentially as the 19ᵗʰ Century began to age. Nottingham needed to change if it was to survive & safely enter the new age.

The first essential was to be able to expand the size of living space available within the town. That was fatally underlined when the 2ⁿᵈ Cholera Pandemic (the first English cholera epidemic of 1832) filled all remaining spaces within town cemeteries, and thus the establishment in 1835 of St. Ann’s Cemetery outside of the town’s boundary. 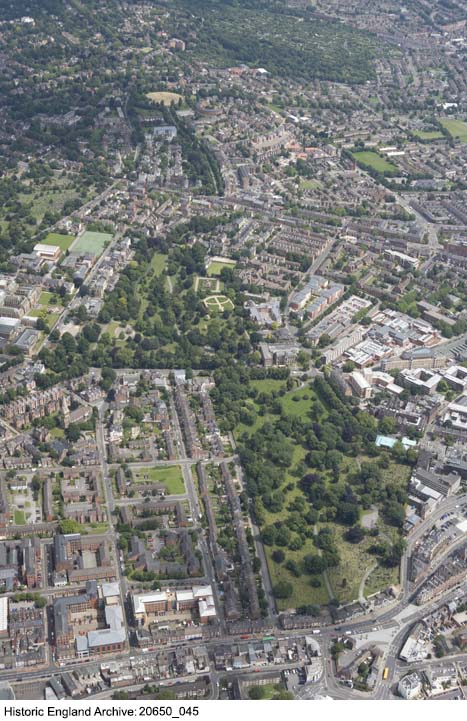 Enclosure of the common-lands north & south of the town were the obvious next step and finally, on 30 June 1845, the Nottingham Inclosure Act got Royal Assent to enclose Clayfield, Sandfield + the Meadows (“Inclosure” is the more ancient form of the modern word “Enclosure”; the ancient word tends to get used , who died in action on in parliament bills). The act contained provisions for parks & recreation allotments which would create a ‘green collar’ in the town. That can be seen very clearly in the photo above looking east across the Arboretum towards Elm Avenue & the Corporation Oaks Reservoir, the line of Robin Hood Chase below (to the right in the photo, below the circle of the Reservoir) and the green spread of St. Ann’s Allotments beyond Corporation Oaks. The routine of Inclosure was long-established from other districts with many other enclosures that had preceded it: a couple of years of argy-bargy, lots of hard work & those in power could then decant large amounts of money straight into their own pockets.

In this case it took 20 years. Almost up until the end, the issue of roads & sewers was left unaddressed. It needed both council & commissioners to agree to work together and that rarely happened. In the 1920s the old-town slums were cleared, and in 1970 the St. Ann’s & Meadows slums (which the requirements of the Inclosure were supposed to prevent) were cleared. That’s an awful lot of new (or cleared, or renewed) roads. 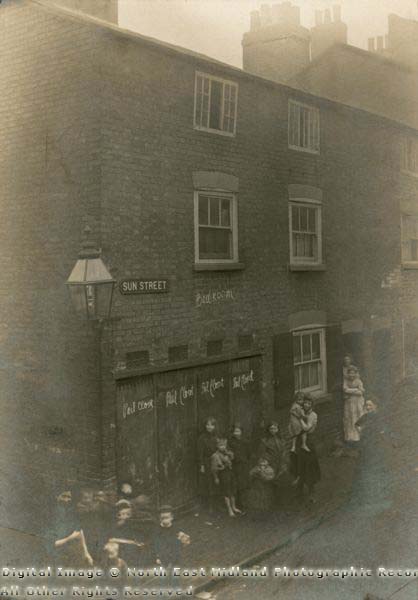 Our final, deeply septic view of Nottingham’s changing scenery, is going to be with the 1912 photograph above of Sun Street (featured within MSS Photographs). The view is of 4 “pail closets (privies)” directly under the bedrooms of the end-house. The pails were emptied into a cart at night & pulled through the streets to the Sanitary Wharf near the Low-Level station at London Road. The carts were emptied into canal barges. The contents were transported to Grantham fields & spread as fertiliser.

The photograph was used as evidence by the city council, and the street was torn down, probably in the 1920s. That photo will likely be our only evidence for it’s existence - the street does not feature in any maps (that I know of).

MSS reports it as being formerly Sherwin Street, and that does feature within the 1862 Salmon map (refer to the MSS maps page). Sherwin Street ran south from Southwell Road, and the next street to the east is Manvers Street. Both of those latter streets still exist, but apart from Nelson Street every other street in the vicinity (including Sherwin Street & Sun Street) has disappeared, and been replaced with Market or City Transport buildings.

The point of this photograph is that the 1845 Inclosure Act carefully detailed acceptable building practices & required provision of Sewage disposal, and stipulated the position of Official Referee & Umpire to enforce them, and those houses above prove that the regulations were often worthless if money spoke louder. Thomas Hawksley reported in 1844 that “the average age at death amongst males was only 20.5 years”, and this photo shows part of the reason why.