Tonight I made the worst mistake I’ve ever done on OSM - straightening everything.

By “everything”, i mean everything on the edit windows,

and then uploaded it.

I have spent two hours and a half mapping the City of Lai Châu in northwestern Vietnam. It was founded in 2008 after the establishment of Lai Chau province.

The city is amazing thanks to its good planning, with wide boulevards and large and beautiful squares and parks.

I’ve drawn a lot of facilities in the past 3 days. And tonight I drew some more, such as square, parks, and schools and buildings.

Then, I mistakingly hit Ctrl-A, which selects Evverything on the map. Not realising the mistake, I then pressed “L”, which straightened those selected.

At this time, the app froze for 20 seconds, which made me think, perhaps it’s too heavy and it’s time to Upload.

Now I’ve running Revert to roll back the damages I made. 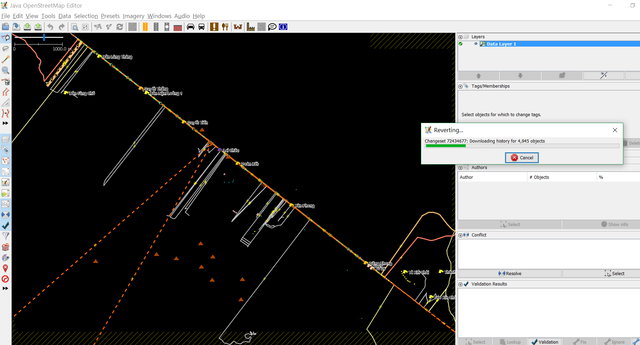 Ouch. Hope you could hit undo and save a copy of the good data. JOSM give humans way too much map superpower.

We do lean best from our own errors. I too have lost work due to my own errors.

As PlaneMad says - use the undo feature (^Z) to step back, if you want you can also step forwards (^Y) to see the changes. Unfortunately this ability is lost once JOSM is closed.

Thank you, PlaneMad and Warin61. You’re right I closed JOSM so there was no way to undo it. Anyway it was a lesson.