We’re coming to the end of the UK quarterly mapping project on footpaths.

…is running for just 5 more days. So last chance to get on there UK folks! This is all about our UK system of legally designated “public rights of way”, so if you’re elsewhere in the world you may stop reading now.

You may notice that I only just became a new starter on there myself! This is partly because I found it a bit tricky to understand what we’re supposed to do, but I finally sat down and figured it out at the weekend. Sorry it took me so long, but better late than never, here’s a few quick pointers:

Use Rob Whitaker’s PRoW data comparison tool. There’s a list of regions where he’s managed to get PRoW data.

Drill down to regions -> districts -> borough. You might pick where you live, but not everywhere’s on there. Failing that, try to find somewhere you know. Failing that, I guess it doesn’t matter where you pick.

Now you’ll see a map with lines. Here’s a bit of Watford 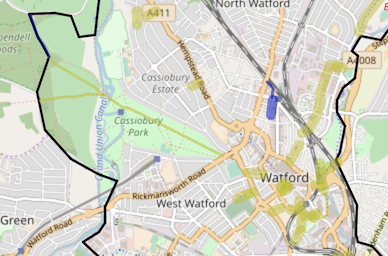 The lines appearing on this map are different colours for different designations. Yellow for footpaths, blue for bridleways etc. More importantly they are Thin: done, Fat: todo. So in the above image I have done the long footpath through Cassiobury Park on the left, hence that yellow line turned thin. The rest to the right are fat lines still to do.

What does “done” mean? Well the lines actually represent local council GIS data. It’s where the council thinks there are footpaths, and where they have official designations as such. Each one has a reference number.

Click the line to reveal the official reference number. Copy that whole title, and put it as the value in the prow_ref=* tag. For example this path has “prow_ref=Watford Borough FP 30” (including space characters)

The designation=* tag is easier. It’s just one of public_footpath, public_bridleway, restricted_byway, or byway_open_to_all_traffic. Those are our longhand OpenStreetMap values. The official data uses the more compact codes: FP, BR, RB, BY.

If there is no corresponding way, then this is interesting. Maybe you’ve found something missing in OpenStreetMap. Maybe you’ve found something wrong in the official data. Time to dig deeper, or flag it for somebody local to investigate I guess. As the page states, we should not blindly copy the geometry data into OSM from the council GIS data. The page also states the source tag to use on your changeset for the particular district you’re looking at. (e.g. in Watford it’s source=hertfordshire_county_council_prow_gis_data on the changeset). In fact in general the page gives lots of information which is worth reading through. I’m essentially trying to give a summary here. Did I get it right?

So this whole thing is an exercise in ticking off matches with this 3rd party data, by adding in the prow_refs. Like any process of ticking things off, there’s a certain satisfaction in getting it done in an area I guess.

But I have to say (after all this) I haven’t found it all that interesting or addictive to do myself. There’s obviously lots of this matching to do as an armchair mapping exercise, but it would be more interesting to do in an area if I knew it better. I’d probably enjoy doing some bits of West Yorkshire, if that was available. But also it feels a bit like littering our data with 3rd party arbitrary reference codes. prow_ref values are certainly not verifiable on the ground! And they’re “official”, sure, but I’ve come to associate “official” government data in OSM as shoddy quality and limited value (Seemingly the opposite of what many folks think official data is)

I guess the value here is in ticking things off, whittling down towards finding those interesting cases where we might be missing a footpath. So 5 days left. The choice is yours. Go wild adding those prow_ref & designation tags… or don’t :-)