The OpenStreetMap awards, and writing about people in pubs

I was meaning to say (and left it a bit late) it is a great honour to be nominated for the OpenStreetMap awards.

I have realised recently, with some embarrassment, that despite trying to contribute in many different areas, my greatest contribution to OpenStreetMap has almost certainly been my diary entries about people sitting around in pubs! :-) 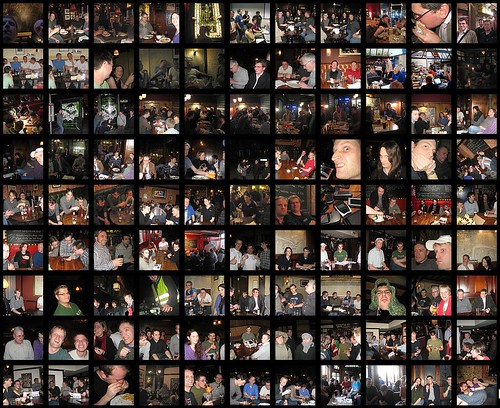 I think my pub diaries date back to 2008 some time. I started writing them as a way to promote our London meet-ups and also to try to inspire others to run similar events worldwide. Hopefully it succeeded in that aim to some extent. But it also developed into a sort of newsletter with a mixture of sometimes current, sometimes just random, topics in and around OpenStreetMap, mixed with some of my own half-baked opinions and opinions of others around the pub table …if I agreed with them ;-)

It turned into quite a habit, which I felt I should keep going. I even became quite organised, by actually writing notes in the pub. I adopted a sort of stream-of-conciousness writing style. Nothing too polished. I think this helped make it a bit less effort, but even so, it added up to quite a lot of effort over the years. It’s nice to have this recognition of my primary OpenStreetMap talent: writing about people in pubs!

I think that Zverik has done a great job putting together these awards. It’s an idea I’ve pondered in the past, but never got off my ass to do. I hope they’re considered successful, and become a regular annual fixture to recognise more people within our community. Hopefully it will motivate people. Hopefully it won’t make people feel resentment. Probably it won’t do either of those things all that much, but…

I think it feeds nicely into another positive effect. Thinking about OpenStreetMap “storytelling”, things like this create a “human interest story” where previously we may have missed it. Take the “core systems” category for instance. We spend a lot of time talking about technologies like Nominatim, iD, osm-carto, OverpassAPI, etc, but if we can find a way to spend more time talking about Sarah Hoffman, Bryan Housel, Mateusz Konieczny, Roland Olbricht, Grant Slater and Tom Hughes, this not only gives them some much-deserved kudos, but it makes the story more interesting somehow. In our open community we miss out a bit on this by being so egalitarian, altruistic, and just plain over-modest all the time!

Other fantastic efforts which create a human interest story include the Belgian community’s “Mapper of the month interviews”, and the OpenCageData interviews. I’m a huge fan of those. Again, it’s a thing I pondered about doing but never got off my ass and did it. I think we need to weave a bit of this good stuff into the blog.openstreetamp.org somehow.

In fact thinking about doing things on blog.openstreetmap.org (and generally not doing them) has put me in a state of analysis paralysis lately. My stream-of-conciousness diary entries dried up, and so I’m also rather embarrassed to be nominated for an award for a thing which I’ve stopped doing!

Of course I also have a new and exciting time sink these days, but I am allowed a few days off from nappy changing to head to State Of The Map Brussels (arriving tonight). I’m looking forward to this immensely. Maybe I’ll get into some interesting conversations with belgian beer! If you like my diary entries, maybe I’ll write up some of these conversations. There we go… it’s motivating people already!