Check out this thing which I just got working again:

So that’s elements with a name tag, where the name seems to be very long. It’s a full list of the longest names in the planet (>150 chars)

I just found this old code and dusted it off. I made it originally back in May 2010 when Richard Weait ran a “Project of the week” looking at long names. I called it “namecheck” at the time, but I’m renaming it “longnames”.

A crazy long name is probably a data bug to be fixed. It certainly looks like a bug when we try to render it. 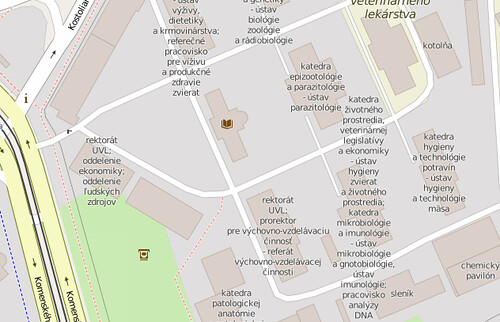 But… well taking that example. Here we have a few university buildings, each with a name, which list several departments. Can we class this as wrong? I think so, yes, but I’ll have to make a hand-wavy non-scientific judgement: I’d say it ceases to be a name of the building and becomes more of a “description” when it gets that long…. in this case. And maybe that’s a problem for a lot of them.

But in general this is not going to be a clear case of “these are all bugs. Here’s how to fix them”. Because of that I think I would stop short of saying this could be a MapRoulette challenge, or a new class of bugs for KeepRight or Osmose. For the moment I’m just going to put this list out there, and suggest some careful interpretation (but feel free to suggest other actions / tagging policies in the comments)

On the other hand some of these definitely are bugs with clear fixes. I saw somebody adding a load of space characters and then repeating the name again within the name tag, presumably in attempt to control label placement on a road (Yeah no we don’t do that)

The other caveat, in case it wasn’t clear, the username listed there is ‘last editing user’. It’s not necessarily the person who added the very long name, but it is a person who didn’t fix it :-) That and the last edit timestamp are really just to see if there’s any interesting patterns in the list.

My planet crunching script to find long names is here along with SQLite, CSV, and mangled OSM XML output files. I will re-run it again in a week, but the display also has a (slightly odd) feature to let you “rescan” an element after you’ve made a fix.

[Update: I mentioned “feel free to suggest other actions / tagging policies in the comments”. But also this discussion on the wiki might be a good place to discuss debate what the policies should be]

Hmnn the display is kind of stuffy. In a small space they can look real ugly. But for single name displays or for Address purposes they will be very handy. thank you for the good work Harry. We are a taxi company in Boston and we rely on Map data for distance and traffic calculation. Our fares and timing are based on the maps. So I might give this a try and see if it helps us.

Is there ever a good reason to have multiple spaces, or is that something we should disallow?

Yeah I was pondering the same thing. I certainly can’t think of a reason. Also HTML tags within names seems like something which is always a bad idea and could be blocked (or at least a new bug type in QA tools)

I believe the name is supposed to be what a thing is typically called by typical people. While an official name (there is a separate tag for official names) for a thing might be ridiculously long, it would be unusual for that to be also how people typically refer to the thing.

At the other side - we should not do mapping for render. It is not my fault that renders does not render it better.

That’s my job. I was also limited by maximum value length of 255 ;-). There are several departments in the single building. I couldn’t find a better tagging for this, but if you suggest something then I can rework it. Names separated with “;” could be split to several nodes. It would be nice if there was a tag for university department.

I put reply to this on the wiki here: https://wiki.openstreetmap.org/wiki/Talk:Names#Very_long_names._bad_practice.2Fbug.3F mainly because my osm account was weirdly broken for a while, and I couldn’t reply here … but also it’s good to discuss ‘name’ issues there

Boo … I was looking forward to a nice list of Welsh names! :)

If something is a description .. then use the ‘description=’ tag? And I’m also using a ‘comment=’ tag instead of the note tag .. the note tag gets some prominence with some editors that I don’t want with some of my ‘comments’.

many of these stem from compositing (e.g. adding the name of the university before the name of the faculty, on the faculty) or from combining (several businesses or doctors mapped as a single osm object rather than an object for each).

Lots of them are intercity bus route relations describing main destinations like “Bus #207 Town1 > Town2 > Town3”… Is that bad practice?

@ I_G Yes, putting a description in a name tag is bad practice.

“name=* tag is supposed to contain solely name, not to describe the type or location of the object or one of its other properties (such as height, elevation, operator, access restrictions, classification/certification/quality labels…).” from http://wiki.openstreetmap.org/wiki/Key:name#Additional_data

Use the description tag http://wiki.openstreetmap.org/wiki/Key:description !

@Warin61 I do know that the name is only for the name, sometimes people reference routes like “the Town1 to Town2 bus” maybe that caused this unpleasantness to occur. Anyways I never tagged bus routes and I don’t plan to do either, public transit mapping is a mess.

We’ve added a filter in OSMCha to get features with very long names: http://bit.ly/2osjHCX