For years I’ve been meaning to try out Mapillary properly, but my phone is broken and can’t connect to wifi, so no upload.

But this was another thing I got to do while on holiday in Brazil. I persuaded my wife to install mapillary on her phone, and we mapillarised while we were driving around her home city of Guarulhos. She’s pretty bored of all this mapping stuff, but likes to keep me entertained while we’re in Brazil, and maybe she likes the idea of mapping her home town too. So we got lots of photos around these colourful Brazilian streets. 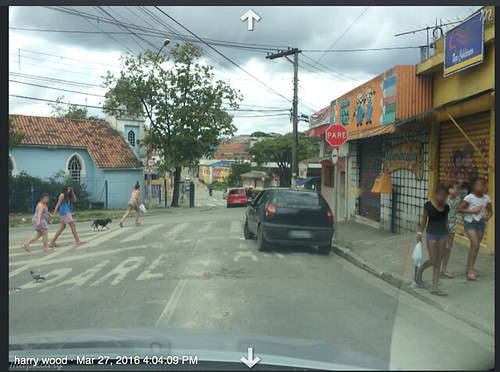 Also while going on a trip to the seaside, but sadly I don’t think I got much of a seaside view in any mapillary photos. Some are quite nice and jungly though 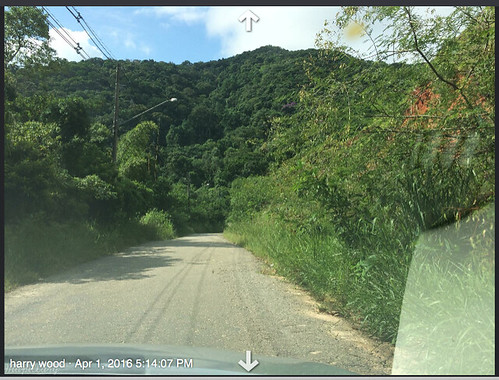 And on the way there my wife wasn’t amused when we got massively detoured in a drive around the city of Mogi das Cruzes. It was only semi-deliberate :-)

On the site you can see what proportion of streets have coverage (green) on a map display like this. I guess Mapillary coverage is expanding, but there’s a long way to go. Hopelessly incomplete… but maybe if enough people join in, we’ll have street-level photos of every street in the world. It feels like exploration. Conquering the territory, or laying the first tracks to form a skeleton that others will build upon. It feels like the early days of OpenStreetMap.

I was impressed by the ease of photo data gathering with the app. It’s a very passive process but the app gives satisfying flashing counter as it gets photos. It detects when you stop moving and stops taking photos. The messages makes it nice and clear what’s going on.

We were driving. I’m not sure how well it works with pedestrian tracing. By fortuitous coincidence, I was gathering up freebies at SmarterTravel Live conference, a few days before heading to Brazil, and one of the freebies (courtesy of dat mobility. Thanks!) was this simple windscreen mounting sucker thing. Perfect for mapillary tracing! 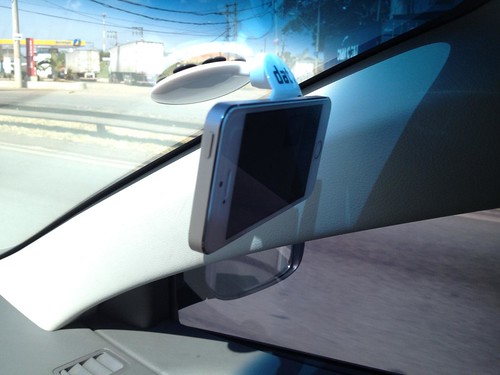 I was also impressed by the ease of upload. (Given a wifi connection) it’s very simple to upload this quite hefty amount of data to the mapillary servers. There’s then a delay while mapillary crunches the data before you see your green line on the map. I notice there’s then a further delay before the images get stitched together with the animated zoomey effect. Understandably because it’s a huge amount of processing, which no doubt gets queued up along with everyone else’s collections of hundreds of photos.

But what about using Mapillary for contributing to OpenStreetMap? When pondering OpenStreetMap workflows, I see a sliding scale of more or less passive data collection. Mapillary is hugely passive, which is great news when it comes to quick effortless surveying, but the flip-side of that is, you leave a lot of work to do later on when you’re back at the computer. I did a bit of this last night. Looking through the places we’d been driving around Guarulhos, clicking around with the mapillary JOSM plugin. Click next photo -> next photo -> next photo, which is essentially like driving along the road all over again, but this time I’m scrutinising the photos for anything I can add to the map. Probably a lot slower than the drive itself (depending on how much stuff you see which needs adding). In other words, after all that very simple passive surveying, I’ve left a lot of work to do later. A hopeless amount really

Being in Brazil my photos are all super-sharp in the harsh sunshine, however I found it pretty hard to identify Brazilian highstreet shops. In the more shabby areas the shops are not clearly branded or labelled (akin to the shabby north London shops all around me), and I often looked at translating a shop sign which turned out to be a billboard/product advert. Slow going, and I probably won’t get around to examining all my Brazil mapillary traces for data to add to OSM.

But being shared with everybody, a mapillary trace is a resource which has the potential to be super-useful for other OpenStreetMappers. I’ve already used other people’s mapillary traces in London on a few occasions e.g. puzzling over particular data problems from notes or other QA tools. But mostly I’ve found myself wishing there was more mapillary coverage. When we get to the point where we can back-up all of our data fixing with both aerial imagery and street-level photos, Mapillary will be quite something! …might have to borrow my wife’s phone!

“She’s pretty bored of all this mapping stuff”

Some would say that she was bored 2 years ago at a London pub meetup.

Great story, Harry! Never been to Guarulhos, but have been collecting some images here in Rio de Janeiro.

Thanks. Yeah I’ve just about managed to learn how to pronounce it (badly), but spelling Guarulhos is too much.

There is mucht light in Brazil from above. It must be difficult to make bad pictures there.